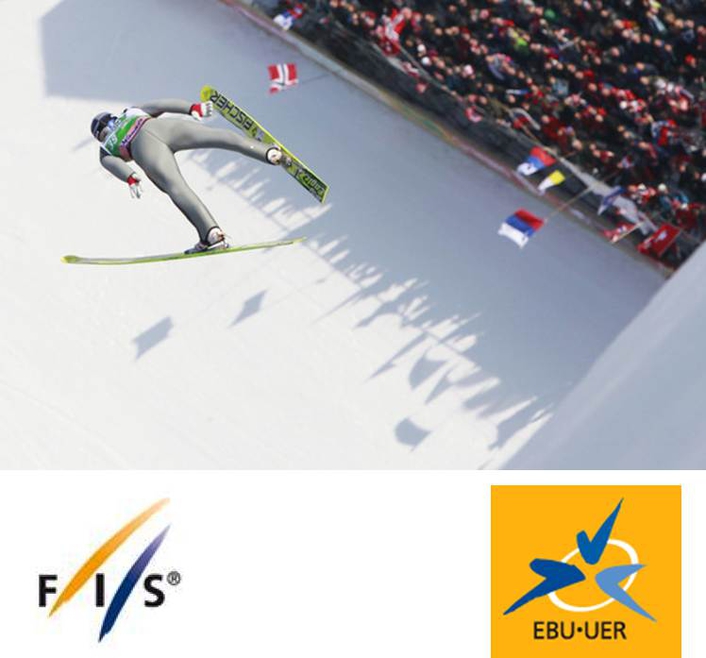 The International Ski Federation (FIS) aims to promote the sport of skiing and snowboarding
The European Broadcasting Union (EBU) and the International Ski Federation (FIS) announced today that they have signed a landmark agreement to broadcast key FIS Ski Flying Championships. The agreement includes the 2014 and 2016 FIS Ski Flying World Championships. The 2014 event will take place in Harrachov, Czech Republic whilst the event organizer for 2016 will be elected at the FIS Congress in 2012.

The EBU and FIS began their cooperation for these three-day championships last year by signing a contract for 2010 and 2012. The first event was held in Planica, Slovenia, in March 2010 and proved to be a resounding success with 11 broadcasters screening a total of 93 hours and a total audience of 67 million people.

Under this agreement, the EBU has acquired all worldwide media rights. European and world audiences will therefore be able to follow these events through extensive free-to-air TV and radio coverage thanks to EBU TV and Radio Members.

EBU Director General Ingrid Deltenre hailed the agreement as an important achievement for the EBU and its Members. “We are delighted to have been entrusted with the rights to transmit these spectacular events. We have excellent and close cooperation with FIS on all their major events and we are looking forward to working together on developing these events,” she concluded.

FIS President Gian Franco Kasper commented: "Following the exceptional FIS Ski Flying World Championships 2010 in Planica, FIS is pleased to continue to work with the EBU to further expand coverage and reach of this fascinating discipline over the next six years. The EBU is a loyal supporter of ski sports and this agreement is another testimony to the strength of our relationship."

Founded in 1924 during the first Olympic Games in Chamonix, France, the International Ski Federation (FIS) aims to promote the sport of skiing and snowboarding and directs the development of all ski and snowboarding activities world-wide. FIS succeeded the International Ski Commission (CIS) that was established during the first International Ski Congress held on 18th February 1910 in Christiania (later Oslo), Norway. 2010 marks the 100th anniversary of international skiing and sees the sport embarking into its second century.
FIS administers the Olympic disciplines of Alpine Skiing, Cross-Country Skiing, Ski Jumping, Nordic Combined, Freestyle Skiing and Snowboarding, including setting the international competition rules. With the help of its 110 member nations (one currently suspended), it stages more than 6’000 ski and snowboard competitions annually. FIS also makes recommendations for recreational skiing and snowboarding in the interest of all and promotes play in the snow as a healthy leisure activity for children and the youth.

The EBU serves 86 national media organizations in 56 countries in and around Europe. It represents its Members and promotes the values and distinctiveness of public service media in Europe and around the world. The Eurovision and Euroradio networks deliver news, sports, events and music to EBU Members and other media organizations. Services to Members range from legal advice, technical standardization and development to coproduction and exchange of quality European content.