Carolyn Viccari, Managing Director, Vsquared TV, said, “We were delighted to be commissioned by British Cycling to produce the host broadcast coverage of this event.  With a new venue there are inevitable teething troubles which we were able to work through with Visions, BC and the venue management to deliver great coverage from a fine facility.” 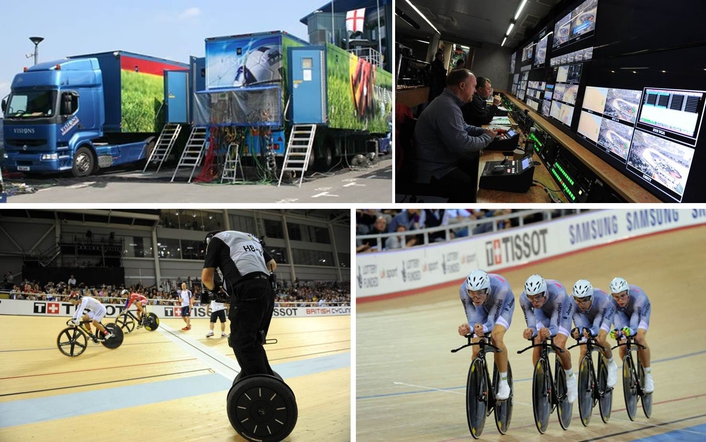 Being a brand new venue, very few cable routes existed in the Sir Chris Hoy Velodrome, so new provision was made in the planning stages. Visions set up two trucks - HD4 and Mercury - for the host feed. The cycling action was captured with LDK line cameras, LDK super slo mo's, and radio cameras including one on the derny motorbike (the pace-maker) and one on a Segway catching the action around the track. These cameras all fed to HD4, which cut the host broadcast for the UCI world feed.  In addition Visions provided another truck, NEP 1, for BBC Sport’s red button coverage on Friday and Saturday and live transmission on BBC2 on Sunday.

An EVS network was set up across all the trucks so that everyone had access to the same material for editing.