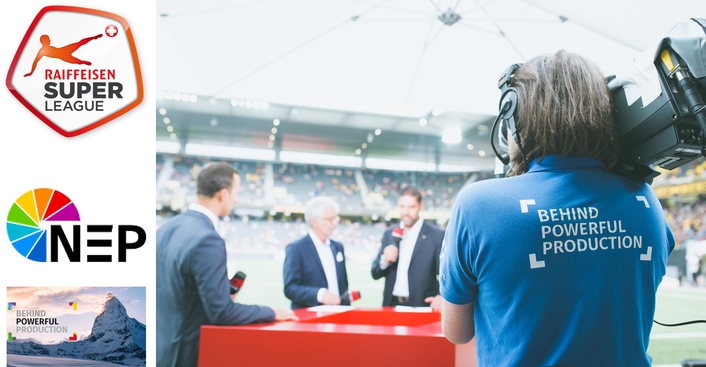 NEP Switzerland has doubled its 4K production resources in readiness for broadcast production work on the 2017/2018 season of the Swiss Raiffeisen Super League (RSL). Contracted to produce all of the Premier Swiss Football League’s games in 4K/UHD, the TV service provider has commissioned the 4K/UHD UHD 42 OB Vehicle – constructed by German system integrator Broadcast Solutions GmbH as part of its Streamline series, with two production areas supporting up to 10 cameras.

UHD 42 made its debut at the RSL season opener, a top match between BSC Young Boys Bern and FC Basel that took place at the end of July in the Stade de Suisse in Berne in front of a capacity crowd. Along with the UHD 41 OB – which was commissioned last year and is also being fielded for the Raiffeisen Super League – NEP Switzerland now operates two large-scale 4K/UHD OB Vans, and produces more than 140 league games in 4K during the season. Broadcast though the Teleclub Sport Pay-TV channel, RSL ranks among the world’s sharpest sports broadcasting. 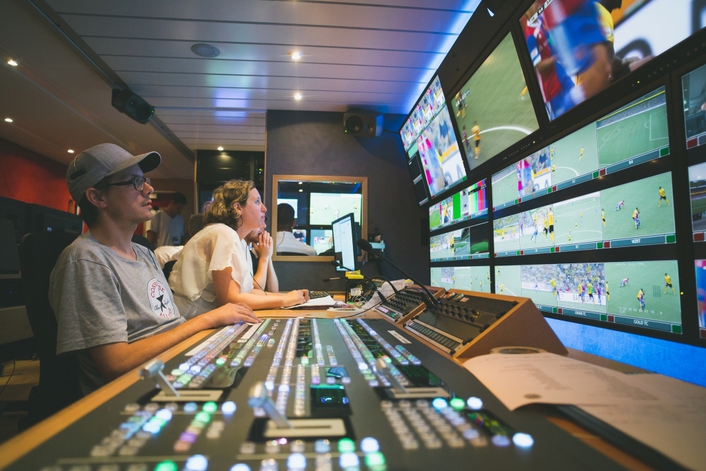 Reto Osterwalder, Managing Director of NEP Switzerland, comments on the company’s 4K/UHD operation: "While still an exception for other broadcasters, productions in 4K/UHD are normal for us. With the experience gained as a team during last season’s 4K productions, our state-of-the-art 4K OB vehicles and our cutting-edge infrastructure, we capture the atmosphere of the games in perfect picture quality and reliably deliver it to all the viewers – every match day." 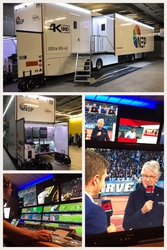 On site in Bern, NEP Switzerland used the UHD 42 to produce the game as well as to manage a pitch-side studio for the Teleclub analysts and experts. The production involved a total of nine cameras – seven on-field cameras plus two flash and studio cameras for the Teleclub studio. The pitch-side location was chosen to be as close as possible to the action, rather than somewhere in the stadium's catacombs. A further static camera was planned for the commentary position.

While production of the Bern game was UHD 42’s main production responsibility, additional footage from and connections to a second game, taking place in parallel, were also handled in UHD 42 and integrated into the outgoing feeds.

NEP Switzerland has placed its trust in Grass Valley’s LDX 86N native 4K camera models and Canon lenses. UHD 42 also uses a Grass Valley Karrera K-frame 8 M/E video switcher, with a 48-fader Lawo mc256 mixing console and Lawo Nova73 Compact router at the heart of its audio operation. Four EVS XT 4K video servers are available for replays, action highlights and clips. New for the 2017/2018 RSL season is the use of the Vizrt Arena virtual 3D graphics system to overlay match facts, analyses, team strips and details of the tactical line-ups. While UHD 42 OB has two production rooms, the games of the Raiffeisen Super League are produced exclusively from the main production room.

Where the majority of 4K/UHD television productions presently use Square Division (where the full image is divided into four quadrants), UHD 42 uses the Two-Sample Interleave (2SI) format (four 3G/HD/SDI). This offers advantages in handling additional HD signals produced during all matches. Intercom signals are transported with the HD feeds, since many of the UHD feed channels are already required for the broadcast’s trilingual commentary production. For the Berne game, UHD 42 sent two UHD feeds and four HD feeds into the network, and received a UHD feed and two HD feeds from the other games. A Nimbra fibre-optic stagebox developed by Swisscom Broadcast AG was used to connect to the fibre-optic network. 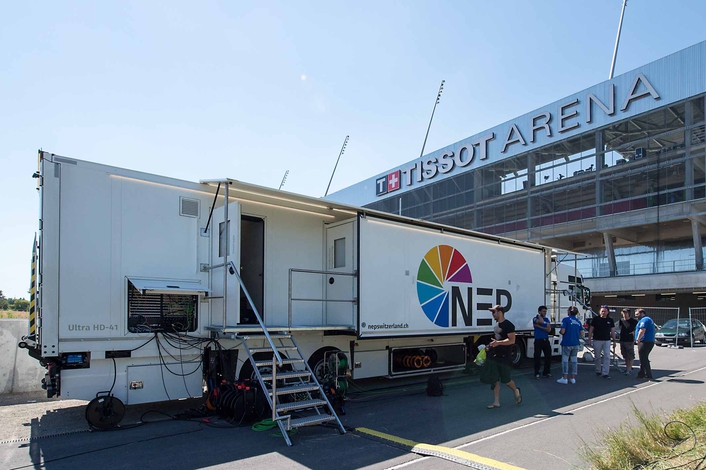 For this, the 2SI signals were converted into Square Division format and sent to the stagebox via four conventional BNC cables per UHD feed. After converting the signal into JPEG 2000 format (4x400Mbit), the stageboxes injected the signals into the fibre network. The Swisscom stageboxes are put to the stadium together with NEP’s OB Vans, ensuring consistent cable lengths on the BNC side and offering enormous advantages in infrastructure costs. This setup is used for all matches and in all RSL league stadiums. 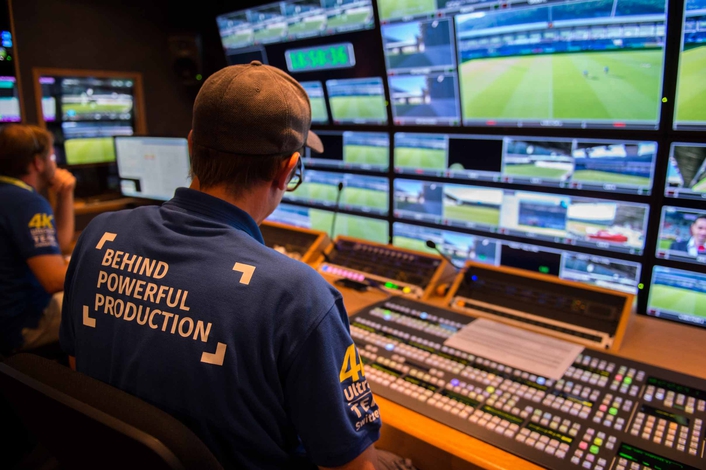 All Swiss Raiffeisen Super League matches are linked to the Starnet fibre network operated by Swiss network provider, Swisscom, using two 10GigE fibre connections, which link them to the Teleclub network and the production centre in Volketswil.

Per season NEP Switzerland produces 144 matches of the Raiffeisen Super League for Teleclub Sport and 180 matches of the Brack.ch Challenge League (in HD).

About NEP
NEP provides the expertise, the people and the next generation broadcast IT facilities to help its clients to develop and deliver the world’s biggest and best live broadcast events. Every day content creators, production companies, broadcasters and telcos rely on NEP’s managed services for OB, studio and cloud production, host broadcasting and playout to reach their global audiences. With integral post-production, visual effects and augmented reality services coupled with its low latency live streaming, CDN, VoD, digital media services, playout, media asset management and uplink communications NEP provides a unique breadth of managed services. NEP is one of the few broadcast and media services providers to own and operate both its own broadcast IT facilities and cloud native IT media infrastructure. With combined creative and IT expertise, NEP delivers services which transform the way global video entertainment is created, managed and distributed.