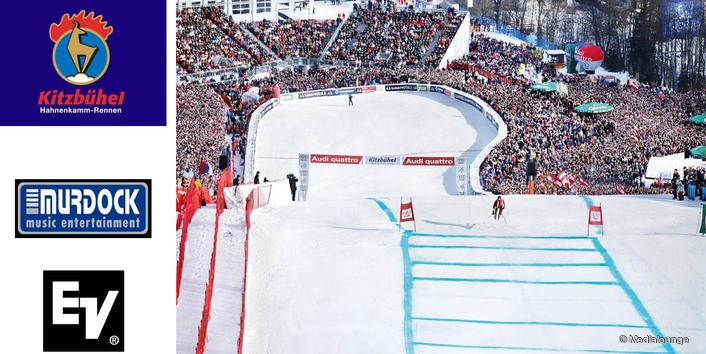 This year’s Hahnenkamm races were attended by up to 100,000 spectators
For decades, the Hahnenkamm Downhill in the exclusive Austrian ski resort of Kitzbühel has been the highlight of the international alpine skiing calendar. No race is faster, none more spectacular, none more prestigious than that disputed annually on the notoriously difficult Streif in Kitzbühel. Organizers estimated that the total attendance over the three days was between 80,000 and 100,000, with numerous celebrities, such as Arnold Schwarzenegger, Bernie Ecclestone, Ralf Möller and Niki Lauda swelling the throng.

The organizers assembled a team several hundred strong for the event, sparing neither expense nor effort. For ten years running, this complicated, challenging but extremely prestigious task has been assigned to Murdock Event & Media. Specialists in major outdoor events and based in the Austrian town of Fieberbrunn, the team from Fieberbrunn has been constantly fine-tuning its Hahnenkamm solution over the years with one constant component: the use of pro sound systems from Electro-Voice. "Why? Because they deliver first-class performance and are completely weatherproof," explains Murdock MD Stefan Gieringer. “In fact, in the ten years we’ve been handling this event, not one EV device has ever failed. So for an event of this importance and difficulty, they’re ideal.” 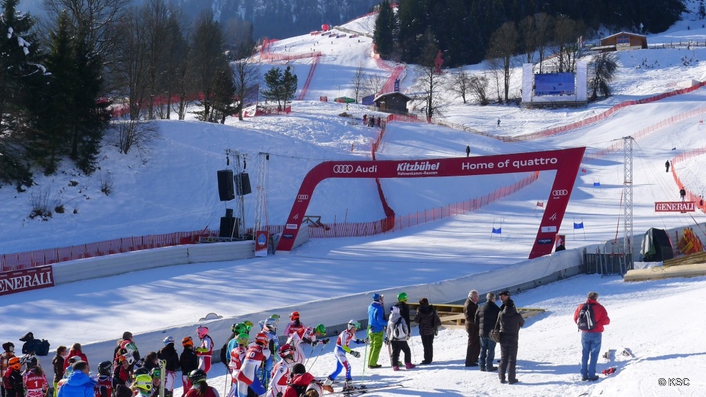 The centrepiece of this year’s sound reinforcement design was the powerful Electro-Voice XLC line array. The six-man Murdock team hung no fewer than 44 XLC127DVX three-way systems alongside the pistes for the downhill and slalom as well as in the finish area, with 18 Electro-Voice Xsubs and 18 Xi-2123 tops completing the setup.

"It’s extremely important,” says Gieringer, "to ensure that spectators are never caught in the crossfire between two banks of enclosures. The sound must always be travelling in the same direction, following a single time-path.” This meant assigning the bulk of the enclosures to masts on either side of the finish line, with a number of delay systems further up the track. As is customary for events staged in Kitzbühl, the finish area directly in front of the main grandstand this year was reserved for the Austrian broadcaster ORF and its international counterparts. The sound reinforcement providers therefore faced the following conundrum: how to provide powerful coverage to the spectators in the grandstands without disturbing the broadcast teams trying to interview the competitors nearby. Similarly, the organizers had stipulated that the coverage designed to serve the spectators trackside should on no account spill onto the pistes themselves. “The fenced-in area was deemed inviolable, but we were asked to provide powerful coverage for fans lining the piste. This was actually a very difficult feat to accomplish,” admits Gieringer. For this reason, exact measurements of the terrain and careful acoustic calculation of the array configuration using Electro-Voice’s line array modelling and design software LAPS played an invaluable role in the preliminary phase of the assignment.

The XLC elements were placed by the Austrian audio professionals on three seven-metre-high flip towers. These ensured homogeneous coverage the length of the 3.3 km-long Streif. "We would have liked, naturally, to have used higher flip towers", says Gieringer, "but for aesthetic reasons, seven metres was as high as we were allowed to go. In consequence, we had to find some extreme angles!” Here, Electro-Voice’s tilt extenders proved their usefulness. The Dx46 controller, equipped with FIR filters, also convinced Gieringer in all respects: "It allows you to get better sound quality, so it brings only advantages.” 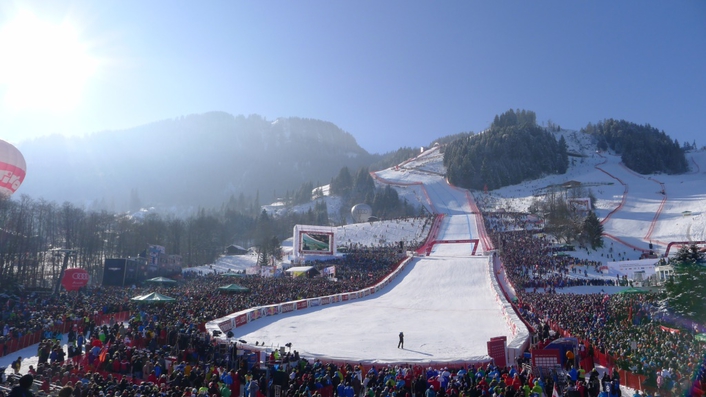 The system was powered by sixteen Electro-Voice CP3000S power amplifiers as well as eight TG7 amps fitted with RCM-26 modules. Electro-Voice’s IRIS-Net software also made its Hahnenkamm debut in 2013: a part of the equipment was remotely monitored and controlled using IRIS-Net software. Stefan Gieringer: “This was a successful test for us, the results proved quite positive. We are considering purchasing more of that equipment for our inventory in order to remotely control the entire sound system”.

To connect the three FOH positions, the Murdock team used a NetMax digital matrix, which also served to link the Austrian television (ORF) and radio (Ö3) teams to their studios. The main FOH position was located in the finish pavilion, as was the Ö3 studio. The reporters’ cabins were on the opposite side of the finish area – only 200 metres away, as the crow flies, but requiring 600 metres of cable. The summed signals were routed from Murdock’s digital console directly to the NetMax with all subsequent distribution in digital form.” Since glass-fibre cables were used, there was no further loss – and no hum loops, fortunately, either.

About Murdock Music Entertainment
For more than 10 years, renowned international artists and organizers of major events have been relying on the expertise and efficiency of Murdock Event & Media. In this, constant development, a professional, highly trained staff, and equipment that is invariably new and reliable have all played a part. A family business, Murdock not only supplies equipment, but is also now full service provider in the areas of event management and media production with a fine reputation in Tyrol for its handling of both corporate and public events.