The SkyCam WildCat system, complete with a MultiDyne HD-3500 transport link, gave viewers a player perspective that added excitement to the live telecast

Super Bowl Sunday was a "long, but satisfying day" for the crew of the SkyCam "WildCat" robotic camera system used by CBS on Sunday, February 7th at Levi's Stadium, in Santa Clara, Calif.; where the cabled camera rig was deployed high above the field to capture a myriad of events, from very early that morning until late into the night to cover the post-game awards ceremony.

"We cut three shows, so our day started at 5:00 am and we were on the air until well after game was over [around 10:30 PM Eastern]," said Stephen Wharton, CTO of SkyCam LLC, developers of the robotic camera system on cables that gave viewers a unique bird's-eye perspective of the on-field action as it happens. "Our crew did an outstanding job."

The SkyCam "WildCat" system, used on many live NFL telecasts each weekend during the entire 2015 season – as well as the AFC and NFC Championship games on CBS and Fox, respectively) – uses a Sony HDC- P1 box-style camera tethered via four steel cables (one with a fiber-optic cable attached) to a gyro-stabilized, weatherproof housing that includes an HD-3500 Multi-Rate High Definition Fiber-Optic Transport Link from MultiDyne Video & Fiber Optic Systems.

The MultiDyne HD-3500, mounted tightly inside the SkyCam housing, converts the SDI video signal from the camera into light so it can travel across a fiber-optic suspension cable; at speeds of up to 45 miles per hour. The camera system is controlled from a control room high atop the stadium or arena, where the MultiDyne HD-3500 RX units receive the optical signal and converts it back to SDI for inclusion into the live broadcast. 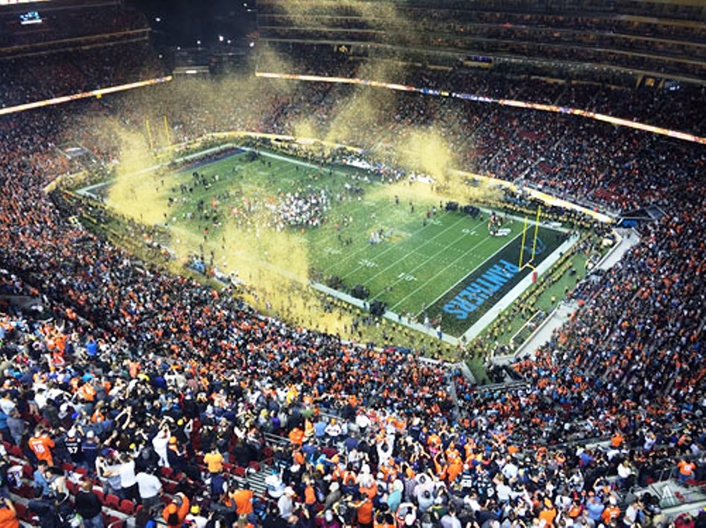 In addition to the game itself, the WildCat system was used during the captivating halftime show. For this, the SkyCam crew had to work with a different NEP Broadcast truck, called "California", which is NEP’s new HD mobile unit designed to handle the unique needs of large entertainment shows, and a different CBS production crew onsite to change the frame rate of the came remotely to 24 Fps (instead of the normal 30). This was done to give the musical numbers a "filmic look," favored by entertainment shows.

"There were a lot of rehearsals and logistics we had to coordinate to ensure those transitions went smoothly," Wharton said, explaining that the frame rate change was done remotely by the vision engineer inside the NEP truck with a "paint box" unit. "For the halftime show, the producers wanted a different look, which the Sony camera (HDC-P1/U3) we use, in tandem with the MultiDyne fiber transmitter, is very capable of. I’m happy to report the system performed perfectly, and we had a great show."

For each SkyCam system, there is a link (with an HD-3500 unit at each end) from the flying camera to the Levi's Stadium control room. Another pair of HD-3500 units is then used to send the signal from the control room to the production truck parked outside the stadium. Sending the signals over a single mode fiber line allows them to travel longer distances than a traditional coax cable could.

More than 110 million people watched some or all of the big game, according to Nielsen ratings released on the following Monday morning. It was the third most watched Super Bowl telecast ever.