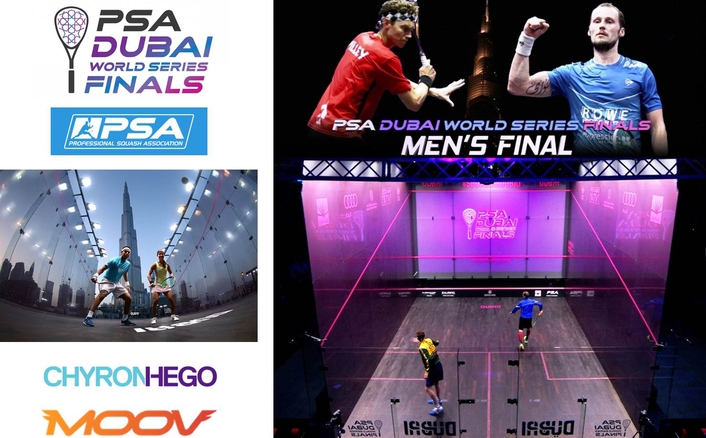 First use of Augmented Reality for PSA coverage

MOOV, a leading broadcast graphics company in the UK, harnessed the latest virtual placement and graphics technology to showcase the Professional Squash Association (PSA) Dubai World Series Finals 2016 to audiences across the globe. MOOV provided outside broadcast production services to enhance coverage of the tournament staged in a purpose-built indoor venue at Burj Park, Downtown Dubai, with Burj Khalifa, the world’s tallest building, in the background. The season-ending tournament took place from May 24 – 28 2016.

“Downtown Dubai is one of the world’s most exciting city centre locations and is the perfect setting to stage the pinnacle of the international squash calendar,” said Alastair Ruxton, Chief Operating Officer, Falcon and Associates, a strategic advisory company working on behalf of the Dubai leadership. “As a place where innovation thrives, we had a vision for this tournament that the hundreds within the venue and the millions watching at home around the world could get a real sense of the city and its energy. Using modern technology to do this was the challenge set to the PSA’s production partner, and the results have been fantastic.”

“This was a world’s first for squash” said Nev Appleton, Director, MOOV. “We had about 1 metre of space above the court so when the robotic camera looked up we replaced the roof structure with a live shot of Burj Khalifa, accompanied with player images, logos and a 5 metre wide #squashindubai image from outside. So many people at the venue were puzzled, looking around to see where it was coming from when they saw it on screen - you know you’ve got the illusion right when they do that.”

For 15 years MOOV has produced Virtual and Augmented graphics for numerous worldwide sports broadcasts at Olympic Games, The Grand National and many high profile football and rugby events, but had not previously attempted anything like this. MOOV worked on the project with its longtime partner ChyronHego.

“We worked closely with MOOV to work out not only the technical requirements and also the design brief. We are excited to see this, our first Virtual Placement project, on air with MOOV.” said Mark Bowden, Head of Technical Integration at ChyronHego.

The 2016 Dubai PSA World Series Finals saw the world’s eight best male and female players compete in a five-day tournament to determine the final title of the 2015/16 season and squash’s most lucrative prize. The PSA Dubai World Series will be staged in Dubai for the next two years following an agreement between PSA and Dubai Sports Council, facilitated by Falcon and Associates.

Appleton added, “We’ve already got great ideas to further enhance the broadcast experience for next year’s event, which will be held in the superb 2000 seat Dubai Opera house.”

ABOUT PROFESSIONAL SQUASH ASSOCIATION
An affiliate of the World Squash Federation (WSF), the Professional Squash Association (PSA) is the global governing body responsible for the administration of both men’s and women’s professional squash around the world.  With over 800 registered players and over 200 events taking place in all four corners of the globe every year, the PSA World Tour showcases the game of squash at its highest level in some of the world’s most unique and stunning locations. Encapsulating all that is good about top flight professional squash, combining athleticism, skill, fitness, tenacity, power, drama and above all else, passion, the PSA World Tour is the pinnacle of world squash.

ABOUT MOOV
MOOV Limited is the UK’s leading sports & events Graphics Company providing real-time 3D graphics to UK and International broadcasters including BBC, BT Sport, Channel 4, IMG and Fox Sports. The company was established in 2000 by Duncan Foot & Nev Appleton with the aim of delivering high-quality graphics for live Sport and entertainment events, coupled with innovation and excellent design.

From the outset MOOV has been a part of many high profile sporting events including The Open Championship, Wimbledon Tennis Championships, Olympic & Commonwealth Games and The Grand National.  Its portfolio is vast and varied, including historical TV events like The Royal Wedding, Music Festivals and Entertainment shows like Mock the Week. In 2013 MOOV was awarded an unprecedented five-year contract to provide a raft of graphics services for BT Sport based at the broadcaster’s headquarters on the Olympic Park, Stratford.