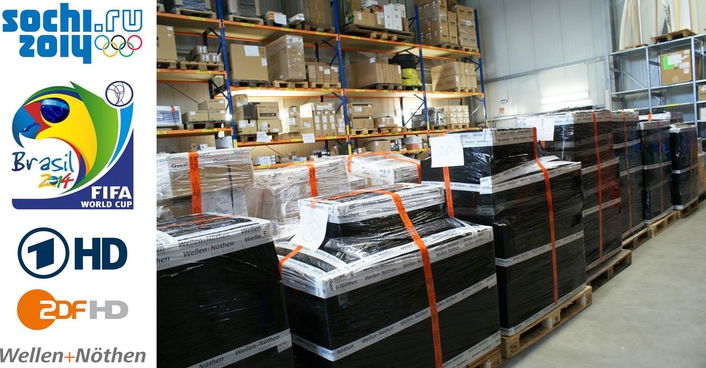 Wellen+Nöthen equips ARD and ZDF for major sports events in 2014
Once again, ARD and ZDF will take advantage of the technical expertise and innovative technologies offered by Wellen+Nöthen’s rental pool: For their live broadcasting from the Winter Olympics in Sochi and the FIFA Football World Cup in Brazil the company will be supplying the broadcasters with an IT-based HD production and broadcasting platform. To meet the requirements of live sports productions, the system architecture, which is networked on-site across numerous locations, is in particular designed to offer fast production processes, a high level of availability and collaborative working. In addition, a technical team from Wellen+Nöthen will provide the broadcasters with extensive on-site support during the installation and commissioning phase and will deliver technical support during the sports events.

The opening ceremony on February 7, 2014 will mark the start of reporting on the Winter Olympics in Sochi for more than 12,000 media representatives. In Germany, on alternate days, the public broadcasters Bayerischer Rundfunk for the ARD, and the ZDF, will transmit their main broadcasts of the events from the competition sites, the Olympic studio in the Mountain Broadcast Centre (MBC) and the International Broadcast Centre (IBC).

Already now, some six months before the event, Wellen+Nöthen is entering its detailed technical and logistical planning stage. “Now that we have finalized our project, equipment and resource planning over the summer months, we are starting to configure and prepare the technology needed for the on-site installation and commission,” says Henning Miehe who is responsible for Wellen+Nöthen’s large-scale rental projects. “We face the particular challenge of having to equip and to link two separate production sites”. Unlike the Summer Olympics, the weather conditions in Sochi mean that there will be an IBC in the valley and an MBC at a higher altitude close to where the downhill disciplines will take place. “This will not only require more extensive logistical planning, but also that we supply an even larger pool of technology,” explains Miehe. 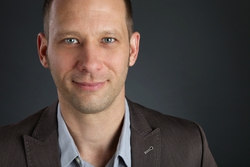 However, in order to make use of synergies in the technology field, ARD and ZDF will both use ZDF’s Mobile Production Unit (MPU) for their productions in Sochi. Wellen+Nöthen will therefore equip the ZDF MPU with cutting, editing and graphics processing facilities at the IBC and MBC, which both broadcasters can use. The teams on-site will in addition be provided with a scalable production, transfer and storage system. Using a mobile infrastructure based essentially on a combination of technical components from Avid and EVS an end-to-end file-based HD production environment can be created. At the IBC, an integrated system consisting of an Avid Interplay production management system, ISIS 7000 storage environment, AirSpeed 5000 ingest and playout servers, EVS XT[3] media servers and IP Director servers will be used for the central ingest, material transfer, processing, highlight editing and playout. A smaller setup, which will be technically similar to the installation at the IBC, will also be provided in the MBC.

High-res editing will take place using editing suites based on Avid Media Composer Nitris DX. Editors will be provided with iNews editing suites and several Interplay Clients for news production. Even while ingest the video material can be accessed, edited and stored file-based before being transmitted to the EVS and Avid AirSpeed servers. Drawing from the positive experience of recent years, ZDF will use the DNxHD Codec for internal processing. The file ingest at IBC and MBC will be managed using MOG ingest servers for transcoding all material automatically to DNxHD. 3D graphics, charts, overviews, overlays and animations can in addition be added during the Olympics live program using fully equipped Vizrt workstations. 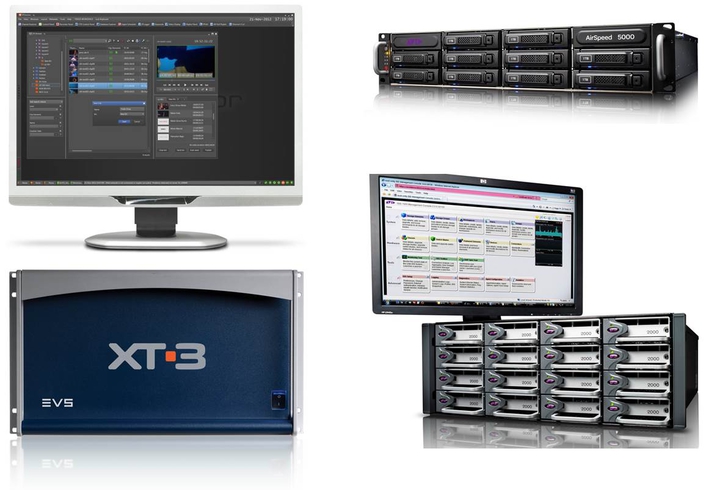 When it comes to technical support, a team of experts from Wellen+Nöthen will assist the broadcasters with the commissioning of the production and broadcasting platform and provide ongoing on-site support before and during the Olympics. These specialists have a high level of expertise in the workflows practised by ARD and ZDF as well as in-depth knowledge of the technical administration of the Avid systems and components used. In addition to the Avid Certified Support Representatives (ACSR), Wellen+Nöthen will also assist ARD and ZDF staff by providing experts to help with the installation, commissioning and project-related maintenance of the Vizrt and EVS components and to offer general equipment support. With the support of Wellen+Nöthen, ZDF staff will start with the configuration of the MPU in October.

The company will also draw on its rental pool to supply the full set of dry hire equipment needed for the monitoring and recording as well as audio and video processing. Around 200 displays from the Sony LMD and PVM series, more than 65 displays from Eizo, as well as multi-viewer systems from Evertz will be provided. In addition, VTRs and recorders from Sony and Panasonic and numerous measuring and control components from Jünger, Wohler, DK Technologies and Lynx will be installed at the MBC and IBC from October 2013. After the conclusion of the Olympics and following a thorough technical inspection, the technology will set off for its next big sporting event: A large part of the infrastructure used will be set up at the IBC in Rio de Janeiro for the FIFA Football World Cup in Brazil to capture some more thrilling sporting action.

With a powerful spectrum of services Wellen+Nöthen Group is a leading technology partner for innovative products and solutions within the broadcast and media industry. Together with its Middle East and Southeast Asian operations by Qvest Media, Wellen+Nöthen Group has locations in Germany, Dubai and Singapore with a team of more than 130 employees within its business units Consulting & Development, Professional Products, System Integration, Technology Service & Support and Rental Solutions & Services. Thanks to its comprehensive business know-how, Wellen+Nöthen Group provides technical consulting & development services. In such fields as strategy and management, information processing, technical applications, outsourcing and business support, teams of highly-skilled professionals provide support to customers along the entire value chain. As a reseller, representative and rental company for AV and broadcast IT solutions, Wellen+Nöthen offers the product portfolio from more than 120 leading international manufacturers. Alongside its outstanding technical expertise as a systems architect, the company continuously develops new holistic operation areas, which are streamlined to its customers’ needs. A unique range of scalable technology support services rounds off the company’s portfolio. Today, over 2,500 customers, including major broadcasters and media networks such as ARD, NDR, Sky, SWR, RTL, ZDF, Al Jazeera, DMI, Etisalat or Turner Broadcasting, rely on the companies’ technical expertise.

On the Way to the Olympic Games in Sochi
Preview: FIFA World Cup Brasil 2014