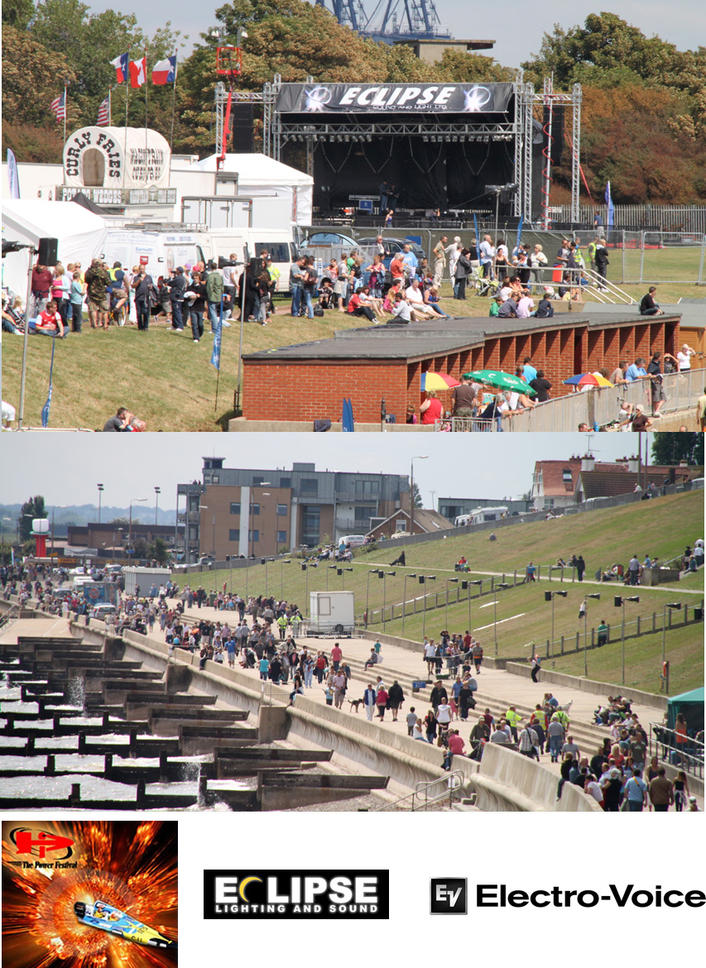 •  Electro-Voice sound reinforcement was one of the longest set-ups of its kind at the National Powerboat Championship in Harwich
•   Engineers were most impressed by XLC-Cabinets because of its tremendous output, quality and throw

Powerboat racing came to the gentle seaside town of Harwich in the form of the UK’s National Powerboat Championships, using Electro-Voice sound reinforcement systems for a beachfront concert stage as well as a kilometre-long 100V line of ZX1 full-range speakers, one of the longest set-ups of its kind.

Offshore powerboat racing in the UK is both challenging and highly competitive. The sport is administered by the Royal Yachting Association, which this year encouraged the incorporation of a music festival into the annual national championship event. The day’s racing was rounded off by 2 evening concerts for 10,000 people, headlined by Tinchy Stryder, DJ Ironik, and X-Factor stars Olly Murs, Jamie Archer and Danyl Johnson.

Eclipse Sound & Light provided PA for the main concert stage, situated just 10 metres from the water’s edge. Watching the forecast closely, the Eclipse team specified a system that could handle the worst type of English seaside weather! “With advice from John Ellis of Shuttlesound, we used EV’s supplied software to set the correct angle on the boxes, and to fly them at the correct height,” explains Matt Suttle from Eclipse. “Everything was coordinated on the IRIS-Net platform from front-of-house, producing an extremely capable system. 6x XLC DVX-127 plus 3x XLD281 line array modules per side gave us 110dB at FOH in the soundcheck, so we were running well within ourselves to meet the official limit of 90dB Leq.”

With the open coast on one side, and residential buildings on the other, Eclipse adopted a thoughtful approach to sub-bass provision. “Using EV’s Bass Array software, we spaced and time-aligned the X-Subs, turning some of them around to give ourselves a cardioid bass pattern which was very effective. This way, we made sure that all the power and output from the EV system went forward into the audience, rather than into the houses behind and to the side of the stage area.” So much so that when the Council’s sound monitors went knocking on local doors that Saturday afternoon, not one local resident complained about the sound from the night before, even with Tinchy Stryder headlining!

Eclipse used 17x EV’s Tour Grade 7 amplifiers, and a whole stageful of EV’s PL Series microphones, but it was the XLC cabinets that set the engineers talking.

“We were very very impressed,” reports Eclipse’s Matt Suttle. “The output, quality and throw is tremendous for this size of box. The sound stays rounded over more than 100 metres, there’s no drop-off, it stays clean all the way to the back. Apart from its sonic performance, the system is quick and easy to fly and set-up, using the software to set grid and box angles, requires minimal effort.”

“Using the ZX1 full-range enclosures with bass response meant that we were able to play music at high quality over a very long distance. There was no way of physically sending 4kW over a kilometre, so we set up a re-amplification box halfway, dividing the line into 4 sections each with 10 loudspeakers and using 4mm thick cable to carry signal over the distances.”

Such was the success of this event that others may be rolled out around the UK, and another event at Harwich is already being planned for 2011.