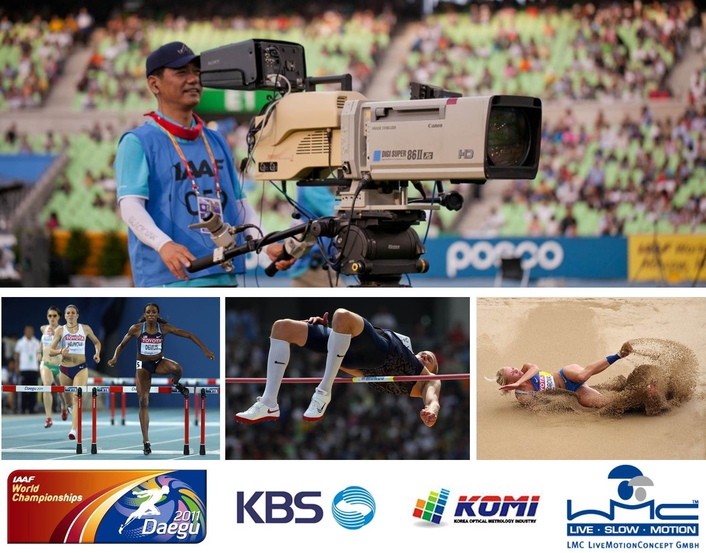 Venues covered by KBS include Track, Vertical Jump and Throws
Together with LMC´s new Asian distribution partner KOMI all four Antelope MkIIs systems are extensively used by the world feed production and therefore stunning replays can be seen by a huge number of viewers all over the globe.

Venues covered by the host broadcaster KBS include Track, Vertical Jump and Throws. KBS decided to use 2 Canon J22x and 2 Canon J86x. All Antelope systems are hard-wired using SMPTE cables with LEMO connectors.

KBS was planning to also use the wireless AntelopeAIR version to have the freedom to move the camera in the in-field during the actual production but decided to stick with four hard-wired cameras in the last decision phase.

All systems are being operated by KBS crew members.A german support crew is on site in Korea to supervise the operations.

Venues covered by KBS include Track, Vertical Jump and Throws

Just before the IAAF World Championships Antelope was used by the Host Broadcaster at the Universiade in Shenzhen China with great success.

"KBS is very happy with the quality of the images and the workflow" says Nikolai Bonstedt who is in charge of the operations on site. " I would love KBS to increase the frame rate a little bit, that would show the beauty of highspeed imaging on athletics even more better".

LMC´s exclusive de-flickering solution which is used on all cameras during the night sessions makes a huge difference when it comes to replay quality.

The MkIIs is the newest product within the Antelope Ultra Slow Motion Family.New functions like various tally lights and the improved Replay RCP with additional features as well as a totally re-designed CCU make the Antelope a stand-alone broadcast product which is available for rent, lease and sale throughout a world wide network of strong partners.