LMC Plays Major Role at "The Duel at Jinsha Lake" 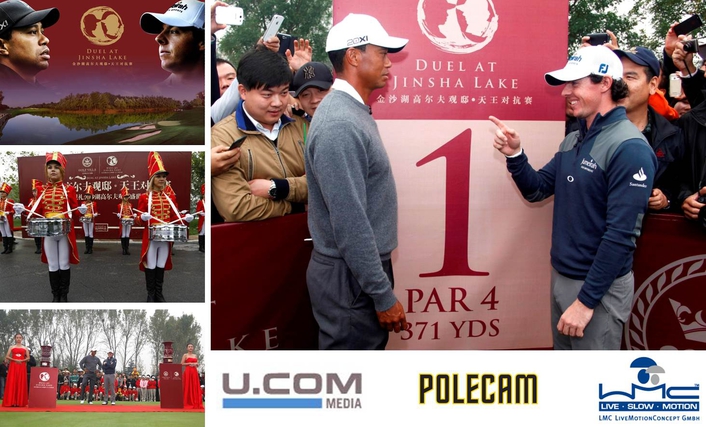 The world´s two most famous golfers were the only two competitors in the 18-hole event, which was held at the prestigious Jinsha Lake Golf Club in Zhengzhou, the capital of Henan, China´s third most populous province.

U.COM Media was in charge of this major international “Made-for-TV” event which was broadcasted in more than 64 countries.

Once more Felix Marggraff was responsible for the Multi Camera Concept which was not just supposed to capture “Golf” but to visualize the unique 1-on-1 format of the duel of the two best golf players in the world. “It has been a challenge to put this together specially because of the extreme short lead-time of just 4 weeks” said Marggraff just before the start of the 4-hour live world feed production last Monday. “Things work different here in China. When the generator blew yesterday and our rehearsal had to be canceled after 4 holes I knew it was gonna be difficult.” He directed the World Feed with a total of 23 cameras of which 3 were RF cameras, one JIMMY JIB, one AntelopeAIR and a Polecam PICO. 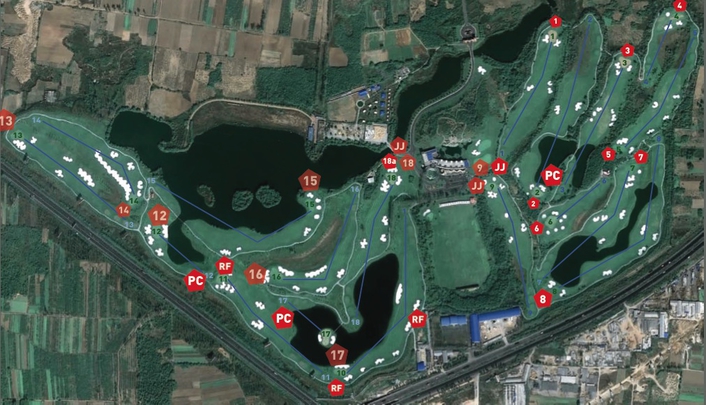 Camera Positions for the Duel at Jinsha Lake

A camera rotation from front to back nine with just one move guaranteed a smooth logistical operation with unique camera angles which transported the special atmosphere created by more than 3000 spectators following the No.1 & 2 in golf.Major broadcasters as the Golf Channel in the US, JGolf, Korea or Ten Sports, India took the live feed to show the event LIVE, tape-delayed or for different highlight programs.

LMC supplied various  camera technologies to capture those special moments. One key-element of the show was the Antelope AIR, LMC´s wireless UltraSlowMotion System. As usual this camera was transmitting both telemetry and HD-SDI Video with up to 2580 fps using Riedel´s conductor and the LINK 1500 transmission system.

A world´s premiere on Golf has been the Antelope PICO - LMC´s new POV style Ultra Motion System - mounted to a POLECAM. “The Polecam PICO gives us the possibility to ”fly” into totally new camera angles where no other camera has  gone    before.“   said Marggraff who is a Handicap 4 golfer himself. “It´s crazy  to see Rory´s swing in 500fps from a vantage point in extension of his spine-angle.”

The Polecam PICO was operated by Steffan Hewitt who is the inventor and owner of Polecam. ”It´s great to work with companies like LMC and    directors   like Felix because  there  is so much more to show when merging the two technologies.” said Hewitt after a busy day.