LiveU and the Streaming Factory Brings the Cologne Marathon to 25,000 Online Viewers 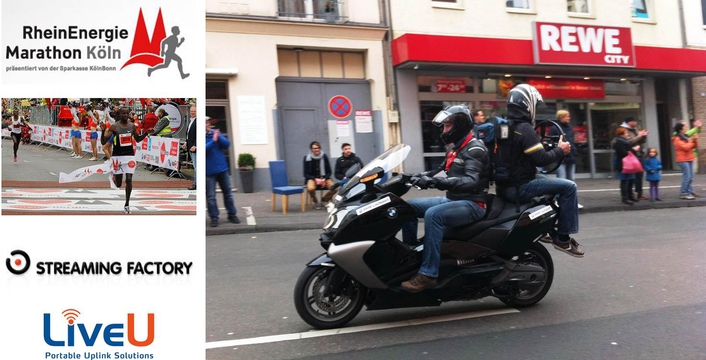 The 16th RheinEnergie Marathon Cologne is the largest sporting event held in the North Rheine Westphalia region of Germany with over 25,000 people taking part. This not only includes runners but also hand bikers and skaters of various kinds. Streaming Factory was hired to transmit the event to the official website by the organisers – www.koeln-marathon.de.

A flagship LiveU LU70 unit - which provides market-leading resiliency alongside HD images -allowed Streaming Factory to closely follow the entire race using a motorcycle and cameraman, bringing close up, visually exciting images to viewers while moving alongside the race – this was the main stream. In addition, Streaming Factory placed cameras around the finish line and these, along with the cellular signal from the LiveU unit, were vision mixed onsite and then streamed via Livestream’s CDN.

The solution and support was supplied to Streaming Factory by Netorium, LiveU’s German partner.

Zion Eilam, LiveU’s Key Account Executive, says, “Having a constant stream from the motorbike really brought the event to life and at a price point that was cost-effective for the organisers. High quality cellular uplinking is a real game-changer for the streaming market, allowing events beyond the traditional sports to gain great coverage. This is another example of how our technology can be used.”

LiveU’s flagship LU70 product is the industry’s leading, bonded 3G/4G LTE backpack with proprietary RF technology for superior resiliency, up to 1080 HD video and sub-second latency for a satellite-like experience.

Markus Frisch, CEO Köln Marathon, says, “The live coverage of the RheinEnergie Cologne Marathon course was a complete success. There were great images from the race of the battle for the lead and the winning break shortly before the finish line. Live coverage like this was really valuable; it was widely appreciated, especially by the friends and family of all the participants. Journalists could also follow the exciting race live including the setting of new course records. We will use the excellent LiveU technology again at future events.”