The Ford Center is a $127 million arena constructed in downtown Evansville. With a seating capacity of 11,000, the Ford Center was built to replace Roberts Municipal Stadium, and will be used for University of Evansville basketball, Evansville minor league ice hockey, and concerts. The Ford Center has 21 private suites, special loge seating and all the conveniences the modern sports and music fan has come to expect.

Prior to game time of University of Evansville Purple Aces basketball games, fans are treated to a fun, rousing pre-game program, including local and national sponsor messages, audience participation games and sports highlights, leading to a motivational introductions vignette, designed to pump up Aces fans and players alike. The lights dim, the main center-hung system goes dark, and then the entire arena erupts in Lighthouse LED video. Myriad colors and designs sweep across the facade and main LED video system. Individual player bios, Purple Aces animated logos and branding symbols spin and explode, and the PA announcer synchronizes his introductions with the on-screen LED video support. By the time both teams have been introduced, the crowd is ready, the Purple Aces are ready, and their opponents are wondering how many points advantage the Ford Center affords the home team. 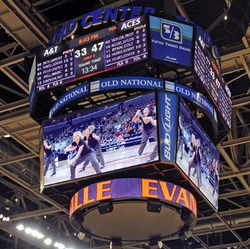 Scorers tables on both sides of the court – built with Lighthouse 10mm LED video panels – operate in concert with one another, providing branding locations for Ford Center sponsors and the University of Evansville, visible to the live crowd and the television audience, a necessity in today’s television-driven sports market.

“The Ford Center is a benchmark example for the kind of facility within the grasp of a medium-sized city,” says Ed Whitaker, Lighthouse director of sales. “For Lighthouse and our partners, this was a great opportunity to work with a quality municipality and fulfill the civic leaders’ vision."

After tip-off, the Ford Center’s video team conducts an excellent program that centers on live game coverage. Woven within the game are instant replays, highlights and advertising, timeout and halftime spots, as well as Purple Aces and upcoming events promotions. The video team’s game production quality is on par with professional sports, the replays are on screen when you want them, and the mixture of live action with sponsorship is excellent. Lighthouse LED video’s contribution to the Ford Center succeeds in vaulting an already beautiful arena to the level of venues in much larger cities.

For the Ford Center’s LED video system installation, Lighthouse teamed with partner and LED video systems integrator TS Sports, and market-leading LED innovator and developer Cree, based in Durham, NC. “Seeing a game or concert in Evansville is now no different than watching the same game or concert in Indianapolis or Dallas,” adds Whitaker. “Lighthouse identifies with Evansville’s quest for excellence at the Ford Center, and we’re proud to have helped them achieve that goal."