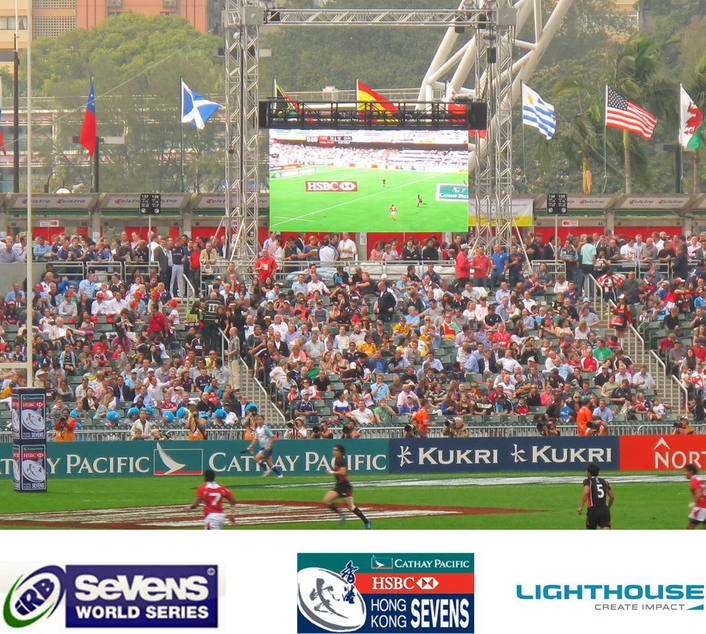 VideoBlades™ is a 12.5mm pixel pitch, modular LED video screen which delivers superb image quality both indoors and outdoors
2012 marked the seventh year that Lighthouse was chosen as the official LED screen supplier for the annual Cathay Pacific/ HSBC Hong Kong Sevens, which sees 24 rugby teams from across the world compete for four prestigious trophies. This year saw the company really at the cutting edge, as its new VideoBlades™ panels wowed rugby fans in two key locations.

The climax to the event saw Fiji beat New Zealand 35-28 in the final for the HK Sevens Cup, while Samoa, Kenya and Canada won the Plate, Bowl and Shield respectively.

As in previous years, Lighthouse supplied screens for the North Stand of the HK stadium and in the Sevens Village at the Indian Recreation Club, this time providing one of the company’s brand new VideoBlades SkyRolls™ at each location. Measuring 6 by 3.375 metres, the screens relayed real-time footage, action replays, match facts and sponsorship information in unsurpassed quality. Whether fans were in the stadium or watching at the Sevens Village, they didn’t miss a second of the action.

VideoBlades™ is a 12.5mm pixel pitch, modular LED video screen which delivers superb image quality both indoors and outdoors. Uniquely it is deployed from a patented rotating structure, making it function like a window shade, which can be raised and lowered as desired.

“We were honoured to be asked to be the official LED screen supplier to the Hong Kong Sevens for another year, thanks to the high quality and reliability of our LED panels,” says Lighthouse managing director Peter Chan.

“It was the ideal platform to show off the capabilities of VideoBlades™ to a large audience, which combines the well-known quality and robustness of our panels with previously-unattainable flexibility. The Hong Kong Sevens is an event that we always look forward to and hope to be a part of for many years to come.”

Lighthouse Technologies Limited is a global leader in LED display technology that develops, manufactures, and markets LED video display solutions for multiple indoor & outdoor applications, media and entertainment events, and sports arenas across the globe. With numerous technological breakthroughs to its name, Lighthouse has established itself as a multi award-winning leader in the LED display industry that holds itself to the highest standards of quality. Founded in 1998 Lighthouse has a strong global presence with regional offices in Europe, North and South America, the Asia Pacific and China. Employing the most advanced technology, the highest quality manufacturing facilities, and world-class, round-the-clock technical support, Lighthouse satisfies customers on every major continent, captivating the imagination of millions.