Lighthouse and TS Sports Make an Impact at TCU 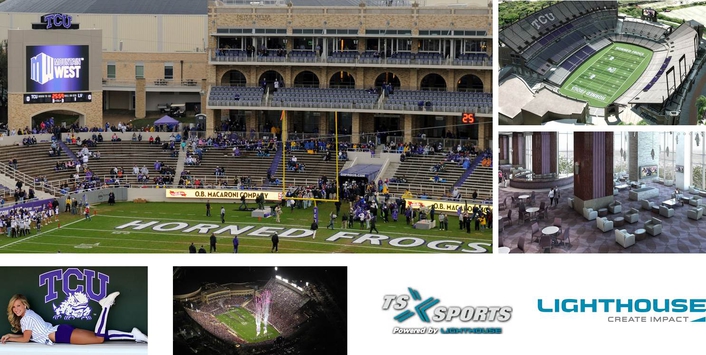 Inside the stadium, early arriving fans are treated to special programs on the giant Lighthouse LED video screens. TCU football sponsors are given top billing with both coordinated advertising and on-field live promotions. Horned Frogs athletics are promoted to help the building crowd get excited for the game. Just prior to kickoff, an emotional, exciting TCU Football feature - similar to the pre-game video at Michigan Stadium - works Horned Frogs fans into a frenzy with visions of Frogs stars dressing and preparing for the game like modern-day gladiators, and highlights from program-making victories such as TCU's 2011 Rose Bowl victory over Wisconsin.

The main screen overlooking the stadium is built with 176 IMPACT 16 panels, totaling over 608,000 individual LEDs. The secondary screen in the corner of the opposite end zone is constructed with 55 IMPACT 16 panels and has nearly 200,000 individual LEDs. Because of the tremendous power of Lighthouse's IMPACT 16 technology, viewing the main screen feels like relaxing in your Lazy Boy and watching the game on TV. The only thing missing is the remote control and central heating. 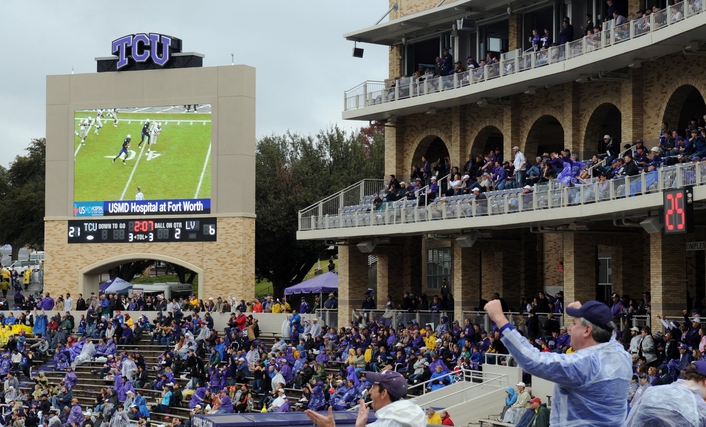 “The image quality and brightness of the IMPACT 16 are beyond everything on the market at a similar price,” says Ed Whitaker, Lighthouse N.A.S.A. director of sales. “For a high-profile program like TCU, LED video screens with the quality and capability of the IMPACT 16 make the statement that they've arrived on the national stage.”

With the kickoff, TCU's video operators begin a coordinated program of live game footage, instant replays, highlights, advertising, on-field promotions with TCU sponsors, classic "video games" for the crowd, Horned Frog athletics previews and vivid animations for touchdowns, big hits and other exciting game moments. The production quality of the animations is excellent, the replays are timely and well-chosen, and the camera coverage of the game is seamless. Watching the Frogs play at Amon G. Carter Stadium gives a football fan everything they want and need: live action on the field, the thrill of the shared fan experience, the convenience of the "closer look" LED video enables, and the greater depth to the game instant replay provides. Whatever is happening - game action, band performance, cheerleading, crowd antics - Lighthouse's IMPACT 16 LED video delivers it beautifully, putting TCU's game day production at the same level their nationally-recognized football program has already achieved.

“Along with Michigan Stadium, TCU's Amon G. Carter Stadium project is a chance for us to demonstrate the outdoor capability of our tremendous IMPACT 16 product,” adds Whitaker. “Apart from being technology leaders, we are college football fans. As fans, we recognize the inspiring rise of TCU football and see a similarity to Lighthouse's rise to the top of the LED video industry."