New LiberoVision Highlight 5.0 to Provide Stunning 3D Replays
Right in time for the kick-off of one of the highest profile sport events in the world, the 2012 UEFA European Football Championship (EURO 2012), LiberoVision, a Vizrt company, launched version 5.0 of its flagship product, Libero Highlight. As over 100 million viewers worldwide watch 16 European nations vying for the title, various broadcasters around the globe are utilizing LiberoVision’s 3D sport analysis software to break down the game’s key moments.

Among the prominent broadcast networks that are covering EURO 2012 with Libero Highlight: ZDF Germany, TV2 Denmark, TV2 Norway, Globosat Brazil, Medcom Panama, TSN Canada, and TVP Poland.  During their live coverage, these broadcasters and others will use Libero Highlight 5.0—the latest version of LiberoVision’s powerful 3D virtual replay system.

Initiated by a 3D camera flight, this exclusive image processing technology takes the viewers to vantage points that cameras never captured, such as a referee or linesmen view, on the goal line, or from a bird’s eye perspective. Libero Highlight 5.0, released June 1, 2012, adds the following features and capabilities: 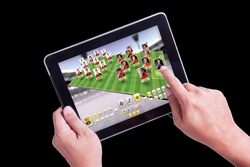 •    Virtual run, which visualizes where and how one player may run in a given play while the remainder of the players are held in a freeze frame
•    Panorama Stitch, which brings all parts of a stadium together for a full, panoramic, 3D stadium virtual view
•    Vizrt export to design customized graphics and interactively playout clips via Sports Hub
•    3D Offside Blade for a clearer separation of offside players
•    Greyboard to highlight selected players in a vivid color on top of a greyed field
•    iPad control of the Libero Telestrator
•    Editable graphics playlist to quickly post process clips
•    Faster operation and enhanced annotation features

The new features are available not only for football but also for: American football, basketball, baseball, ice hockey, rugby, and handball. The coming version, Highlight 5.1, will incorporate volleyball and beach volleyball.  Vizrt is already seeing enthusiasm from broadcasters that intend to use Libero Highlight for the upcoming Summer Olympics as well as other major sporting events.

For a demonstration of Libero Highlight, Version 5.0, please click here

Flexible operation
The broadcasters using Libero Highlight for EURO 2012 coverage are all taking advantage of its flexibility. Some position it at the International Broadcast Center (IBC) in Warsaw, while others are using it from the studio headquarters in their home countries using live camera feeds backhauled from the EURO 2012 stadiums.  Some commentators operate it interactively from its intuitive user interface; others control it via an Apple iPad using Viz Anchor, other Vizrt control software, or LiberoVision’s iPad Telestrator with dynamic on-set display on touchscreen monitors and videowalls.

For example, German broadcaster ZDF is operating the Libero Highlight 5.0 from IBC in Warsaw, Poland. Analysis clips are be transferred back to their open-air public viewing studio on the Usedom Island in Germany.  ZDF is using the Vizrt Sports Hub in Usedom to ensure tight integration with the Vizrt live graphics workflow at its network facility. The anchors playout and telestrate the highlight clips from the games interactively using a touchscreen and an iPad, both running on Sports Hub.   TV2 in Norway is using Sports Hub and Highlight 5.0 from its Norwegian studio.  TV2 in Denmark is utilizing Highlight 5.0 from its EURO studio on a houseboat in Copenhagen. Sports commentators there control Highlight 5.0 using an iPad to enhance live game analysis.

Winning viewers for televised sports
“Highlight 5.0 was highly anticipated by broadcasters producing live coverage of EURO 2012,” said Petter Ole Jakobsen, chief technical officer for Vizrt.  “In covering such a popular event, broadcasters know they must employ state-of-the-art tools and techniques to ensure a visually dynamic production. What’s remarkable is how each of these EURO 2012 broadcasters will be using the same product in such different ways. This is a testament to Highlight 5.0’s versatility, flexibility, and cost-effectiveness.”