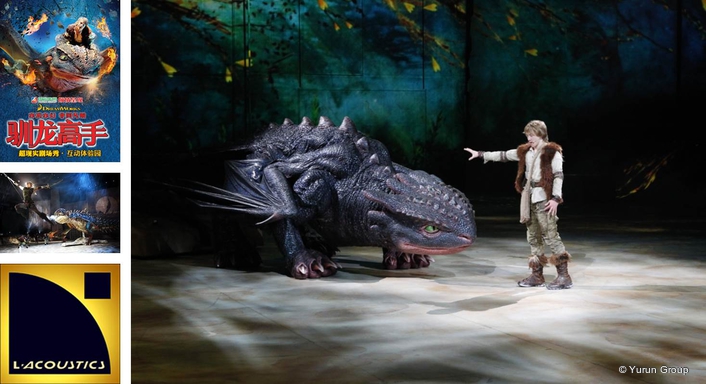 L-Acoustics KARA and KUDO system deployed for spectacular live adaptation of 2010 Academy Award-nominated film
Created by DreamWorks Animation, the How to Train Your Dragon Live Spectacular was produced by the storytellers at DreamWorks Animation and Global Creatures, the masterminds behind the international phenomenon Walking with Dinosaurs, the #1 grossing world tour of 2010.  Following its launch in Australia and New Zealand, as well as a successful run in North America, How to Train Your Dragon Live Spectacular landed in China.  Over 145,000 spectators turned out to enjoy the premiere at a newly built theater on the grounds of the Beijing National Stadium – the famous Bird’s Nest, built for the 2008 Summer Olympics.

Featuring more than a dozen impressive dragons with 40-foot wingspans, the audio challenge for Rightway Audio Consultants and sound supplier Dadong Huahan was to make the dragons sound as impressive as they looked, while also superbly representing spoken voice and song from the cast of the dragons’ human trainers. And all of this had to be done in a theater with an in-the-round configuration that was full of reflective surfaces. After rigorous tests, an L-Acoustics KARA and KUDO sound system was chosen to make the production soar.

A panoramic view of the set up, featuring L-Acoustics KARA and KUDO systems

“54 KARA in nine groups of six are installed for the three sides, and in using KARA and KUDO, we were able to achieve perfect clarity, intelligibility, and precision, as well as a wide dynamic range,” explains Vincent Zhou, Technical Manager at Rightway Audio Consultants. “We especially appreciated KUDO’s customized horizontal directivity, which enabled us to offer a superb audience experience, with crystal clear sound, free of reflections; and since both KARA and KUDO offer extended vertical coverage, the arrays provided even sound distribution, guaranteeing coverage from the last row on top, to the lowest row at the front.

Soundvision was used to work out an accurate acoustical and mechanical simulation of L-Acoustics speaker systems.

“Using Soundvision, we were able to design each of our eleven hangs to perfectly cover our in-the-round configuration.  We used a distributed sub system, with an end fire array configuration in the corners to guarantee even low frequency coverage throughout the venue, while reducing excitement from the room and the seating blocks.”

Because of the in-the-round theater setup, distance between the speaker hangs was an issue that could have an effect on sound quality. To minimize the damping factor, Rightway suggested the LA8 amplifiers were flown using L-Case.

“L-Case allowed us to place our LA8s directly above the KARAs, so we could connect the arrays closely to the amps and avoid running lengthy cables,” explains Mr He Biao, Chief of Dadong Huahan. “We then used the LA Network Manager to monitor and control our entire sound system in real time. It allowed us to make balancing adjustments, and to inspect all enclosures rapidly so we had a flawless performance at each show.” 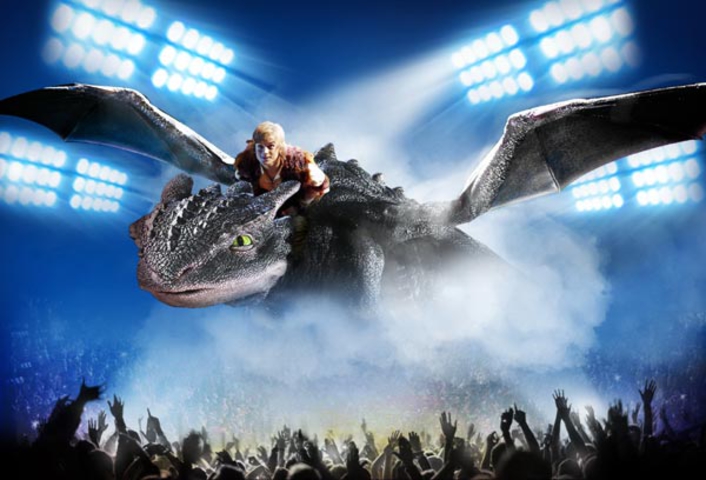 “We were very satisfied with the system” summarizes Bryson. “There was considerable and constant pressure placed on the audio system to reproduce the various audio performance levels: crystal clear live vocal reinforcement, engaging music, playback and credible SFX needed to be delivered to every single seat in the arena, without forgetting about the rich and wide bandwidth voices of the dragons. The L-Acoustics KARA and KUDO, coupled with the SB28 amplifiers, handled all these tasks simultaneously with ease.

Sex and Love for Adlib with Enrique
III. Elit Presentation Days
L-Acoustics Heats Up Arcade Fire On The Road