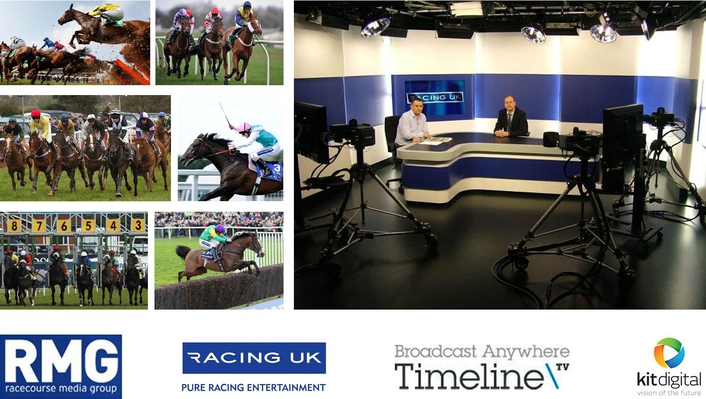 The West London complex houses the satellite and cable channel Racing UK, betting shop channel Turf TV and the international racing services provided by GBI Racing. The latter is a joint venture between At the Races and Racing UK taking British and Irish horseracing to international markets including Europe, South Africa, Australia and South East Asia.

“Key to the success of this installation is the rigor and determination of KIT digital’s systems integration team to facilitate the completion of this new facility on schedule and with no down time to the services provided to RMG,” said Dan McDonnell, Managing Director of Timeline TV. “Effectively the construction of the building and the broadcast installation was completed concurrently — while we simultaneously moved the IT infrastructure for about 40 people from Teddington studios.”

McDonnell continues, “It was not an option for RMG to go off air so the services were transferred to their new Timeline home at midnight on 27th February, and was on air live for the first race on the 28th February 2012. KIT digital’s systems integration team responded well to the short timescales and ongoing tweaks by delivering a seamless transition ahead of schedule and on budget.”

“This was an extremely challenging project because of the tight timescales involved.  We partnered very closely with Timeline TV to deliver a future-proofed HD facility, designed with their anticipated future needs in mind,” said Steve Burgess, Technical Director of KIT digital. “Despite these extremely tight deadlines, our team completed the installation, testing and training with enough time to spare to allow RMG a two week rehearsal window before going on air from Ealing Studios.”

KIT digital’s team has the breadth of experience and expertise in systems integration that ensures the company delivers first class solutions for fixed or mobile applications that meet the many technical and operational challenges seen in sports broadcasting today, and as demonstrated at Timeline TV against challenging timescales.

About Timeline
Timeline are a leading provider of broadcast technology and services. Their portfolio includes live and post production facilities (in Soho, Ealing Studios and MediaCityUK), flyaway production units, temporary tapeless productions systems and RF links. Timeline is the industry’s leading authority on shared server systems and specialises in the delivery of IP Director networks.
Based at the iconic Ealing Studio, they are trusted by some of the biggest brands in the UK television market including the BBC, ITV, Channel 4 and Sky as well as the independent sector including IMG, Sunset & Vine and Input Media. Timeline deliver technical and creative facilities for programmes as diverse as live music and awards shows, political conferences, global and domestic sporting competitions, light entertainment and current affairs.