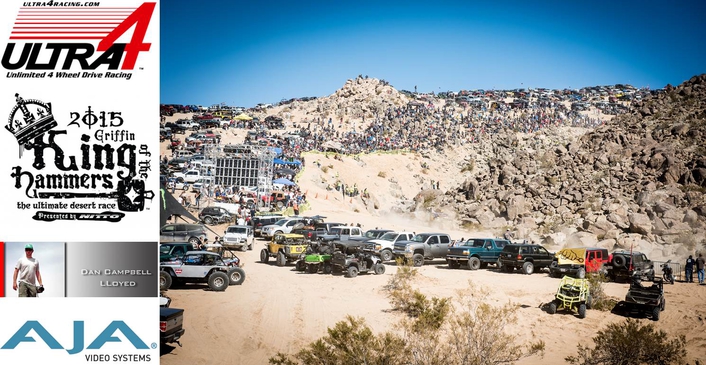 .
60,000 spectators descended upon Johnson Valley, CA in February to witness the largest off-road race in King of Hammers (KOH) history. During the event, 430 Ultra4Racing teams navigated more than 200 miles of boulder-laden terrain in an attempt to win the KOH 2015 championship title, though only 17 crossed the finish line. For the fourth consecutive year, Freelance Producer Dan Campbell-Lloyd returned to the desert to capture and broadcast the action in HD for fans on-site and more than 400,000 viewers online.

“AJA makes really awesome gear, and without it, we wouldn't have been able to pull off what we did,” Campbell-Lloyd shared. “It allows us to deliver a very cool, professional and impressive webcast. AJA’s team is also fantastic to work with; you couldn’t find a more helpful group in the industry.” 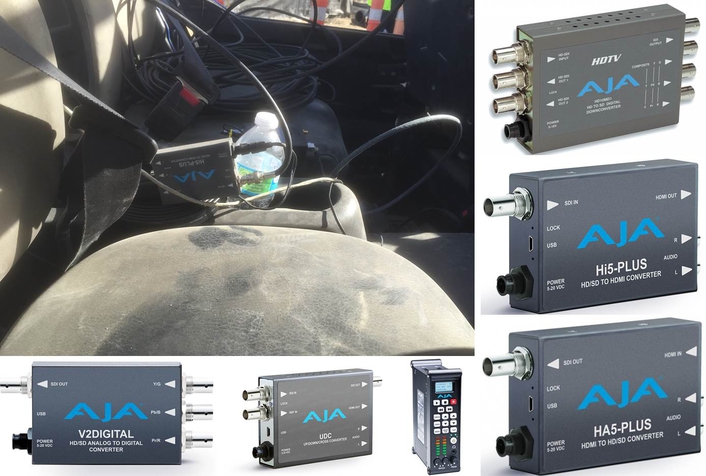 Campbell-Lloyd’s crew captured live footage for the webcast and two jumbotron streams using Sony EX3 and NEX-F100U cameras with ENG and fixed Canon lenses. The team also used Re-Play XD cameras, two of which were streamed 24/7 and kept locked off as a safe cutaway. Teradek H.264 Cube encoders, Hi5-Plus 3G-SDI to HDMI Mini-Converters and HA5-Plus HDMI to 3G-SDI Mini-Converters were also tapped to send signals back through a dish, which also worked on a roaming, side-by-side UTV (Utility Terrain Vehicle) camera. 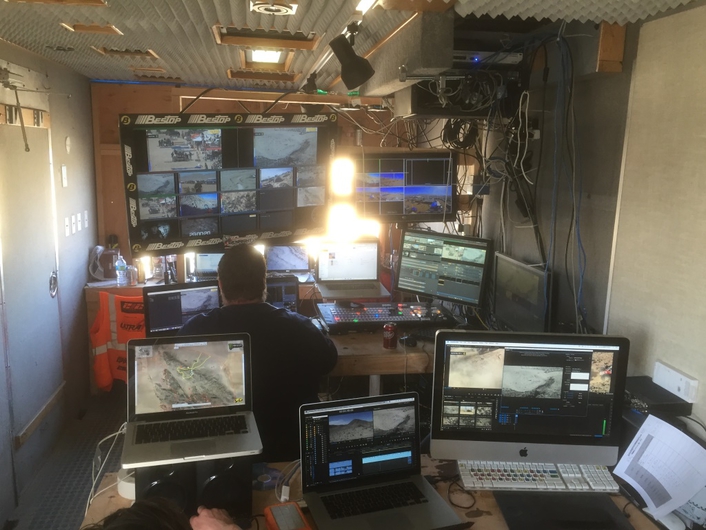 AJA’s Mini-Converters were able to withstand the rigorous Johnson Valley conditions while enabling Campbell-Lloyd and his team to deliver the live camera feed to fans. “AJA Mini-Converters are the glue that ties all of our equipment together; we couldn’t operate without them,” he explained. “They’re also incredibly reliable. I can toss one in a UTV or on top of a microwave dish atop a mountain and know that it will continue to perform perfectly through dust, rain, sleet and snow.” 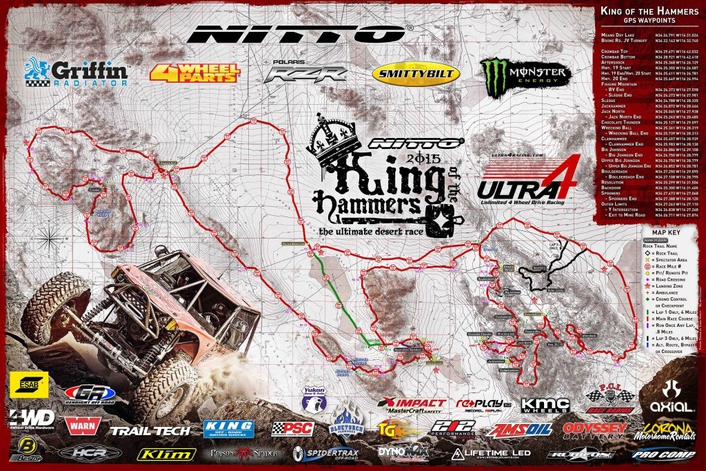 The broadcast also called for highlight footage to be fed to the jumbotrons and social media sites like Instagram and Facebook, as well as for a DVD highlight reel post-event. Using RED and Sony FS-700 cameras; Shotover aerial-stabilized camera systems; and AJA Ki Pro Minis stationed in two helicopters, the team recorded aerial footage of the race in Apple ProRes 422. Files were handed over to the editing team when the helicopters landed to refuel. Editorial then added the files to a Final Cut Pro timeline on an iMac, which utilized an Io XT connected via Thunderbolt for ingest and playout, for scrubbing and trimming and final playout into an AJA KUMO router and the TriCaster 850EX for the live stream for the jumbotrons and webcast. Using this workflow, the team was also able to load any commercials, bumps and pre-edited driver infused footage, into the timeline and send it straight to the show. 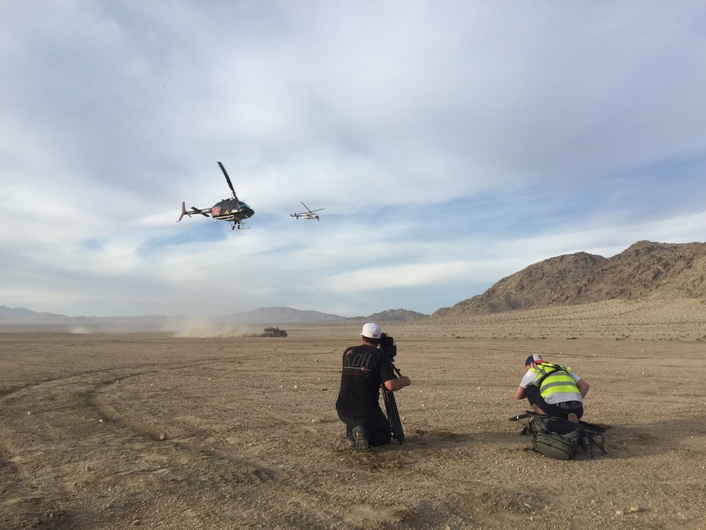 “IoXT made it really simple to take a live feed, record and playback in one step. I loved that we could do all that in the middle of nowhere without needing an extra operator,” said Campbell-Lloyd. “KUMO was also huge for us on this project, because we were able to route feeds through more than 20 cameras, TVs and jumbotrons; it turned out to be our TriCaster operator’s favorite piece of equipment.” 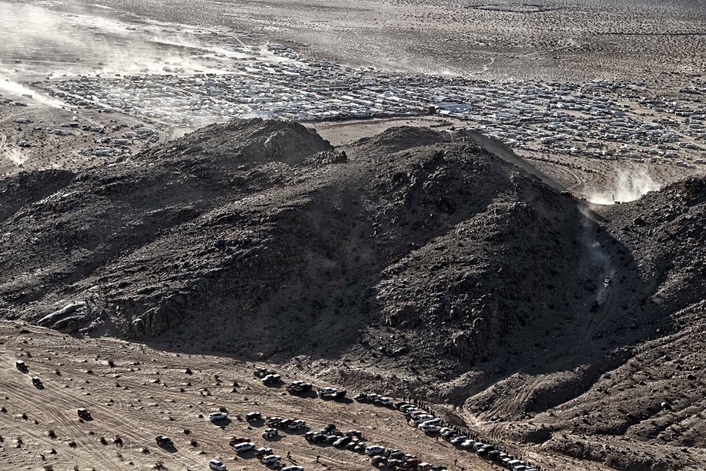 By the end of five days of production, Campbell-Lloyd and crew brought KOH fans more than 35 hours of action-packed coverage, enduring cold, damp weather throughout. Pleased by the durability of AJA gear in such harsh conditions, he concluded, “One of the great things about AJA gear is that it keeps working, even in the most undesirable environments. I never have to worry about replacing it, which can’t be said for all of our gear; it saves us a lot of time and money.” 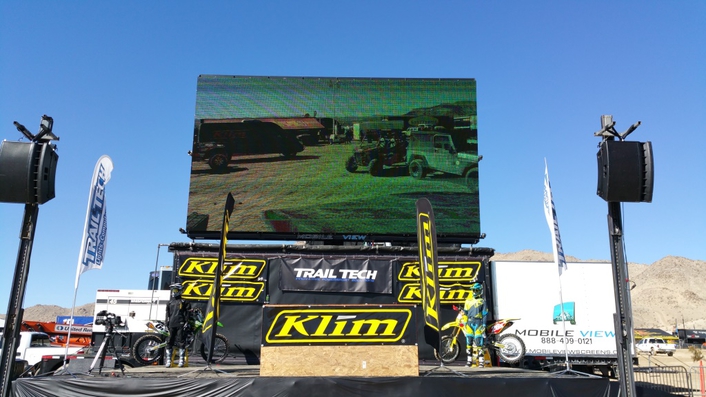 For a look at all of the action from this year’s race, check out the 2015 KOH Highlight Reel.