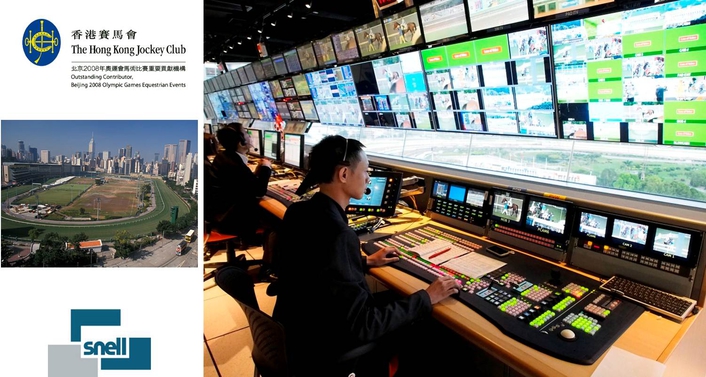 Kahuna 360 Provides Multi-Format SD/HD Switching Capabilities for Horse Racing Organization's Broadcasts to Three Million Viewer
Snell announced that the Hong Kong Jockey Club (HKJC), one of the world's largest horse racing organizations, has chosen Snell Kahuna 360 multi-format SD/HD production switchers as part of a major, multi-phase upgrade of its broadcasting center to support HD operations. The HKJC, which produces a total of 9,600 hours of TV programming every year, selected the Kahuna 360 switchers to replace an array of aging vision mixers.

The HKJC's weekly programming lineup includes more than 36 hours of programming, including pre- and post-race program and infotainment content in addition to live coverage of twice-weekly race days. Carried by several Hong Kong SD and HD channels as well as pay TV and satellite services in seven other countries, the HKJC's broadcasts reach more than 3 million viewers every week.

After a stringent evaluation and procurement process, Kahuna 360 scored highest in technology and price/performance, as well as its ability to provide multi-format inputs and outputs for both SD and HD. Another critical factor in the HKJC's selection of Kahuna 360 was its resilience and ability to auto-fallback seamlessly with no visible interruption in service — a major consideration for live racing coverage that is watched by millions of viewers. Also, the system's ease of use and effortlessness customization are important in the HKJC's compact production environment, which requires all of its producers to be multi-skilled and perform hands-on vision mixing without a dedicated operator.

"With such a busy programming and production schedule, reliable and state-of-the-art production switchers are a critical element in the HKJC broadcast environment. Kahuna 360 is truly an all-in-one solution, with the scalability we need to evolve our operation into the future," said Mrs. Oonagh Chan, head of broadcasting services for the Hong Kong Jockey Club. "As a longtime user of Snell switching, conversion, and playout equipment, we are keen to acquire solutions that offer high quality and reliability as well as value — and we know we can depend on Snell's first-rate support organization."

In phase one of the switcher upgrade, two Kahuna 360 4 M/E mainframes were integrated with HKJC's existing multi-viewer and TSL tally control systems. Since each Kahuna 360 mainframe can support two or more control panels, four separate programs are produced simultaneously. One mainframe serves as the field program mixer to produce a clean TV feed from over 40 HD cameras plus playout sources during the live race coverage. The other Kahuna 360 is the master program mixer, combining the clean feed output with playout and bilingual data superimpositions to deliver the program feed in both Chinese and English for the ATV Home Channel. Kahuna 360's support of multiple layers and keyers as well as its DVE capabilities has been essential to this requirement.

Kahuna 360 will be a central component in phases two and three of HKJC's HD migration, which includes the design and build-out of a new broadcast center. "Kahuna 360's multi-format capabilities are a critical factor in HKJC's current migration to HD operations," said John Carter, senior product manager for production switchers at Snell. "The system's built-in up/down-conversion and auto-formatting capabilities enable HKJC's TV production center to operate simultaneously in SD, HD, and 1080p signals on the inputs and outputs, which means HKJC can produce high-quality HD productions without the expense of an external signal converter."