A three-day event that starts March 4 in Tulsa, Okla., the Bassmaster Classic is expected to attract more than 100,000 fans. JM Associates will produce five hours of edited coverage for ESPN2 after the event, as well as 18 hours of live coverage for www.bassmaster.com.

According to Mike McKinnins, vice president and executive producer for JM Associates, the Bassmaster Classic is the company’s biggest event of the year. JM Associates has come a long way since its first syndicated series, The Fishin’ Hole, which in 1979 established the foundation for its lasting relationship with ESPN. The company continues to focus on fishing and other outdoor competitions.

With its new JVC cameras, the company streamed live HD coverage of an event for the first time at last year’s tournament, which was held in February in Greenville, S.C. “It was our first real shoot with the JVC cameras and it went really well,” McKinnins said. “Before, we were never able to watch anglers do what they do live on the water.”

Since then, JM Associates has produced live coverage of several competitions. The company chose JVC’s IP-based system in late 2014 after previous attempts to produce live coverage failed, and added the GY-HM200 camcorder last April. “We had been trying different equipment for three or four years to try and stream our events,” McKinnins recalled. “But we’re not in a cozy little stadium.”

In the past, the company had tried to produce live coverage with satellite trucks, but it was “next to impossible” because of line-of-sight issues and the expansive areas of rivers, lakes, and other bodies of water used during the contests. “We never saw a fish caught live in those days,” McKinnins added. “This year, we’ve seen incredible, game-changing moments in a tournament – and we’re seeing the passion and excitement these guys go through live.”

Howard Downs, engineer in charge for JM Associates, said the typical setup includes all four JVC camcorders, plus two Sony camcorders paired with Teradek encoders. The JVC camcorders are equipped with 4G modems that plug in directly via the camera’s USB port. The camera feeds go to the ProHD Broadcaster in Little Rock, then back to six Teradek decoders on the truck for use during the live production, which results in about a one-second delay. 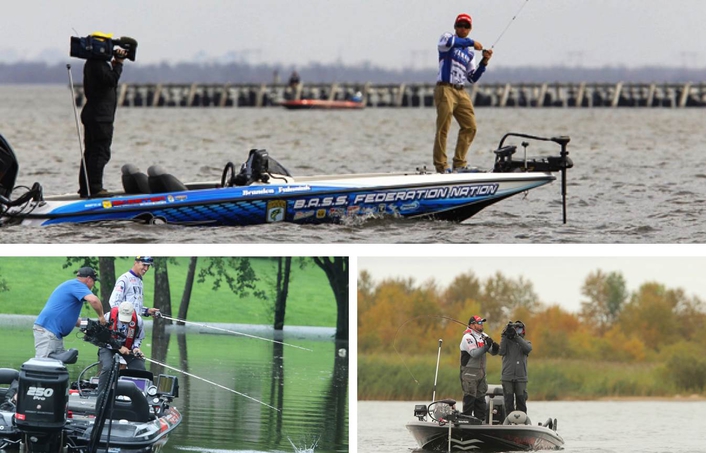 With the JVC cameras, the only transmission restriction has been 4G network availability, which continues to improve but has been challenging in rural areas for parts of some events. Downs said at least three cameras are usually transmitting at any given time. Of course, the production can simply cut to coverage of a different angler if there is no signal available, but when necessary, the GY-HM850 can automatically reduce picture quality to compensate for a weak signal. “If cell service is good, the pictures are beautiful,” McKinnins noted.

“One difference with the JVCs I really love is that you can see the actual cell connection and Internet connection in the camera viewfinder,” Downs said. “With the other cameras, they have to take the camera off their shoulder and look. That’s where JVC is killing it. They also are a lot more stable – they seem to stay connected all day. The JVC technology is really solid. It’s really changed our world.”

McKinnins said the shooters like the new cameras, as they are lighter than the cameras they previously used. Usually, a featured angler wears a wireless lavalier microphone, and a shooter remains with them for eight hours to provide live coverage throughout the day. Instead of an IFB system, all shooters wear an earpiece and use their cell phones to join a conference call with the director. While the feed of every camera is recorded in the production truck, each camera records footage internally on SD cards to provide the best image quality for post. 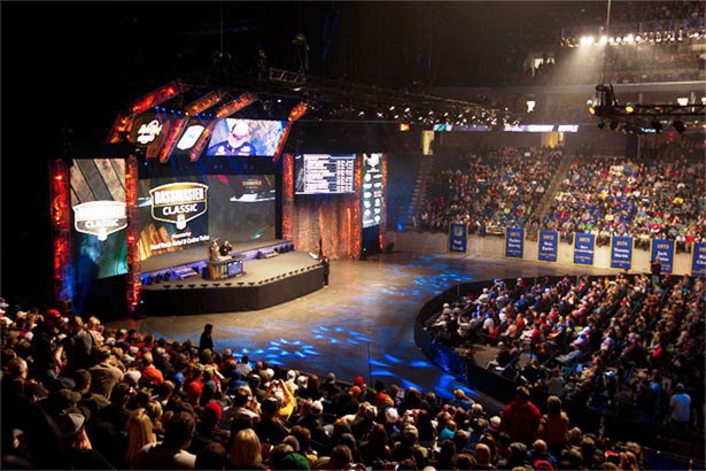 The live coverage from the JVC cameras has also allowed JM Associates to change its workflow. In the past, the company would take its entire production team to an event, including talent, and produce the entire show on site. Now, the talent remains in the company’s studio in Little Rock.

McKinnins said the JVC ProHD cameras have held up well to the changing weather conditions during outdoor events. “There’s been bad weather when we’ve gone out there,” he explained. “You need a pretty tough and robust camera, and these have done well. For the most part, as we are out in the elements, we get good pictures.”