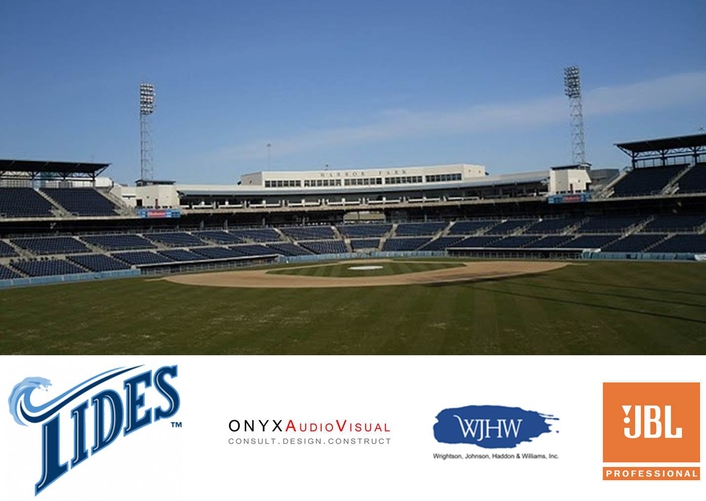 Onyx AudioVisual installed a JBL VLA line array loudspeaker system at Harbor Park in Norfolk, Virginia.
At Harbor Park in Norfolk, Virginia, home to Minor League Baseball’s Norfolk Tides, a new JBL VLA line array system gave the team’s stadium a sonic refresher that both vastly improved the sound on the field and did so very cost-effectively. Two clusters, each containing six JBL VLA 901 speakers with 90-degree horizontal horn coverage patterns offer fans exceptional sound and high intelligibility while staying within both the team’s budget and the physical limitations of the park.

“It was challenging because we could only work within the space that was already there,” said Tom “T” Brockenbrough, Project Manager for Onyx AudioVisual, the systems integrator for the project. Due to budget constraints, the system design and installation teams replacing the PA system were required to use the same sofitted set-backs in the outfield wall of Harbor Park, which was completed in 1993. Furthermore, the soffits could not be accessed from above, eliminating the possibility of using a crane to lift PA components in; they would have to be loaded from the side. “Time and budget pressures meant we couldn’t run conduit and install a distributed audio system, which would have been the ideal situation,” Brockenbrough said.

Gary T. White, Senior Associate at acoustical consultant firm Wrightson, Johnson, Haddon & Williams (WJHW), concurred. “Budget and time frame were major considerations. We started discussing the replacement late in the 2009 season. The desire to have a new system in time for the 2010 season was probably the most important factor in system choice, with cost a close second. Even with a proper budget, our estimates couldn’t rationalize designing and installing a distributed system in less than eight months.”

However, White had an inspiration: “I had done a lot of other minor league and major league stadiums and really wanted to try a line array for an outfield cluster,” he said. “WJHW had used VLA line arrays other projects and I was working on some football stadiums with end-zone clusters, so the VLA’s for Harbor Park were an easy choice.”

“Given the constraints we had to work with, the JBL speakers were the best possible solution,” Brockenbrough said. “They were installed in the same spaces as the old PA, but they brought so much more power to the stadium’s sound. We were testing them in place and they’re incredibly powerful, yet the sound was still highly articulate, with very even coverage and very good frequency response. There is no other box out there with that much output, that can throw that far, and still sound great.”