JBL VERTEC Line Arrays at the Opening of the Commonwealth Games 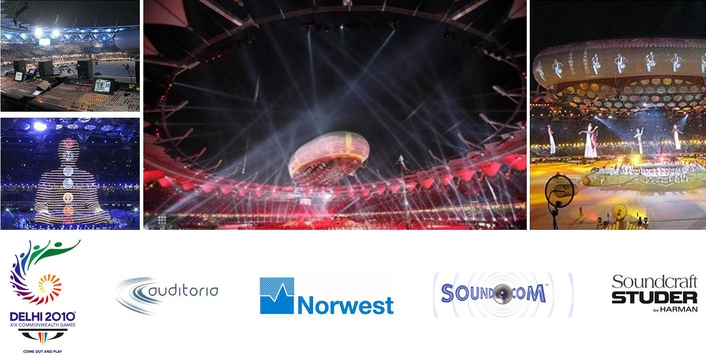 Norwest Productions and Sound.com provided a JBL VERTEC line array system for the opening of the 2010 Commonwealth Games
Bringing together more than 50 nations from around the world, the 2010 Commonwealth Games in Delhi, India opened its 12-day athletic competition with a large, multi-array JBL VerTecâ line array system powered by Crown I-Tech HD amplifiers to support the opening ceremonies. The system successfully filled the Nehru Stadium in New Delhi, occupied by more than 60,000 spectators and nearly 5,000 athletes. Audio production companies Norwest Productions (Australia) and Sound.com (India) collaborated to implement Auditoria’s sophisticated event system design in the field.

Scott Willsallen of Auditoria, having already completed major games ceremonies such as the Athens 2004 Olympics, Doha 2006 Asian Games and the Melbourne 2006 Commonwealth Games, was contracted by the organizing committee for the Delhi 2010 Commonwealth Games to design and manage the audio system for both the opening and closing ceremonies.

Twenty-five distributed JBL VerTec arrays lined the stadium to ensure everyone from the floor seats to the upper levels fully enjoyed the entertainment, which included performances from traditional Nagada drummers, who drummed to the beat of the countdown to the official start of the event. Eight of the arrays featured three JBL VT4889 fullsize line array elements and 17 contained three VT4888 midsize line array elements, with each also including a fullsize VerTec arrayable subwoofer. One hundred and two Crown amplifiers, including 92 I-Tech HD amplifiers, powered the JBL VerTec rig. Harman’s HiQnet™ System Architect system software was used for configuration, remote control and monitoring of the system.

“The VerTec V4 DSP tunings are excellent. The only additional tuning we had to do was some minor notch filtering to tidy up the response in the venue,” stated Willsallen. “It was all very subtle filtering. If it came down to it, we could have run the show very successfully without any additional E.Q. filtering.”

On the field of play, 25 JBL SRX712M speakers were used for the performers’ monitor system, while 32 JBL CBT70J column speakers and JBL SRX718S subwoofers were used to ensure that athletes on the field could experience the event’s sound. On the main stage, JBL VRX915M monitor wedges were utilized for musical performances.

“Norwest Productions and Sound.com combined their resources and skills to deliver an excellent audio system, which met the performance requirements of my design and worked within the project budget,” summarized Willsallen.

Harman HiQnet™ is the world's first connectivity and control protocol that integrates all product categories in the signal chain for professional audio systems of all types, size, and applications. Harman HiQnet no longer requires the user to manage multiple disparate operating systems or be responsible for programming individual signal processors, speaker controllers, wireless microphone systems, and mixing consoles. HiQnet was developed by engineers from across Harman’s Professional Division and is coordinated by the System Development and Integration Group (SDIG), a team of dedicated systems specialists based in Salt Lake City, Utah.