It’s Darts, but not Quite as We’ve Known It! 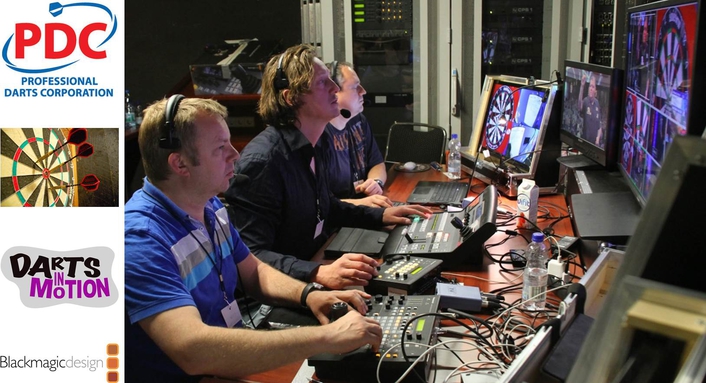 The camera chain consists of seven PTZ HD cameras connected via SDI to a Compact Videohub 40x40 router to an ATEM 2 M/E Switcher
It’s quick, it’s fast, it’s furious and the crowds love it! The game of darts has in recent times undergone a massive transformation, appealing to much younger and more diverse audiences throughout Europe. Live tournaments now attract sell out crowds numbering in the thousands.

Live production infrastructure from Blackmagic Design has been an integral part of the multi-cam workflow now used during coverage of the Professional Darts Corporation (PDC) European Tour. Production company Darts in Motion has already been involved with events in the Netherlands and Germany in 2014, and are now preparing for tournaments in Austria and Gibraltar alongside three more in Germany later in the year.

Earlier this year, the PDC sold the exclusive rights to betting firms such as Coral and Bet365, who can now stream tournaments live on their websites. The PDC continues to stream live content produced by Darts in Motion through its own website, via Live PDC, a paid for subscription channel.

The camera chain consists of seven PTZ HD cameras connected via SDI to a Compact Videohub 40x40 router to an ATEM 2 M/E Production Switcher. The live master output for the European Tour event is then produced on an ATEM 1 M/E Broadcast Panel. 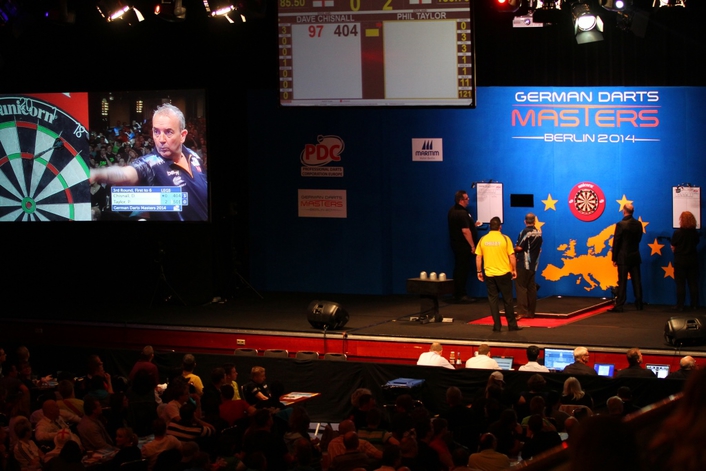 “To give ourselves maximum mobility and flexibility we built our PPU systems into two 14 HE racks on wheels,” explains Robbert van Loon, co-founder of Darts in Motion. “Live production being what it is, each job we do for the PDC can have differing requirements. That means we can be working with anything from as few as six inputs all the way up to 16. Because of that we designed a separate SDI input panel as a bridge between our camera and graphics chain and the the video router.

He continues: “Using the ATEM’s built in Multiviewer, we then live switch the program (PGM) feed using the ATEM broadcast panel and overlay graphics using the ATEM’s upstream keyer (USK). Each of the camera operators and spotter (graphics) is supplied with their own monitor, taking a reference input from the video router via a Mini Converter SDI to HDMI from Blackmagic.”

“One of the features we really like on the ATEM 2 M/E Production Switcher is SuperSource. It’s perfect for showing the famous darts ‘split shot.’ On the left you have a close up of the ’20’ on a dartboard while on the right you have a second shot of the player taking his throw,” explains Robert. “In years gone by a cameraman would need to adjust his shot every time the split was on. Now we adjust the shots with the ATEM’s built in DVE player. This is a big improvement.”

The production team then has to duplicate the clean PGM feed for a number of different purposes, including an online streaming device. “This is essentially an UltraStudio Mini Recorder, connected via Thunderbolt to a Mac Mini operating Wirecast,” says Robbert. “We also have to supply copies of the same PGM feed to the commentator positions, big screens in the venue and television screens in the players’ and officials’ lounge.”

Another copy of the PGM is also recorded in Quicktime ProRes HQ on a HyperDeck Studio SSD broadcast deck for archive purposes, while a second HyperDeck is used to record a backup of the PGM in ProRes LT. Darts in Motion also record isolated camera feeds when needed using an HyperDeck Shuttle SSD recorder for post editing purposes.