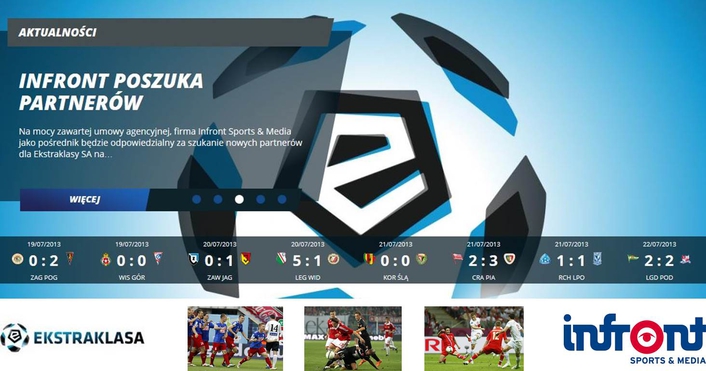 .
Polish Professional Football League grants exclusive mandate with a focus on Germany and Austria – sponsorship package includes board presence, sleeve advertising of all 16 teams and integration into TV graphics.

The Ekstraklasa and Infront Sports & Media are to collaborate: An Official Sponsorship package for the Polish Football League is to be made available with the international sports marketing company offering it exclusively in Germany and Austria. The marketing opportunity includes a continuous brand presence at all 296 league games, logo branding on the right sleeve of all 16 teams and brand integration into TV graphics. Furthermore, additional advertising as well as title rights, merchandising rights and a hospitality contingent are included in the package.

The current T-Mobile Ekstraklasa season started on 19 July 2013 and draws to a close in May 2014. For the 2012/13 season around two million fans visited Ekstraklasa stadiums. As the most popular national competition and with more than 22 million football fans in Poland, the Ekstraklasa offers businesses an excellent platform to prominently position their brand and/or products. The Official Sponsor package is offered for the first time ever - positioned directly after the Titular Sponsor (T-Mobile) on the second level of the sponsorship hierarchy

Boguslaw Biszof, Chairman of the Management Board at the Ekstraklasa SA, commented: "Parallel to economic growth, Polish football has experienced an upward trend – with its internationally successful players and clubs as well as the infrastructural progress amongst others as a result of the UEFA EURO 2012™. Infront, with its experience in international football marketing and its distribution network, is our preferred partner to source an appropriate company to occupy this package for the first time.”

Reinhardt Weinberger, Managing Director of Infront Germany, said: “The Polish market has become increasingly attractive for foreign companies in recent years and the country is today the most important East-European economic partner for Germany and Austria. With its nationwide and almost year-round presence, the Ekstraklasa offers the Official Sponsor high national visibility and the opportunity to network with its target groups on a regional level.”