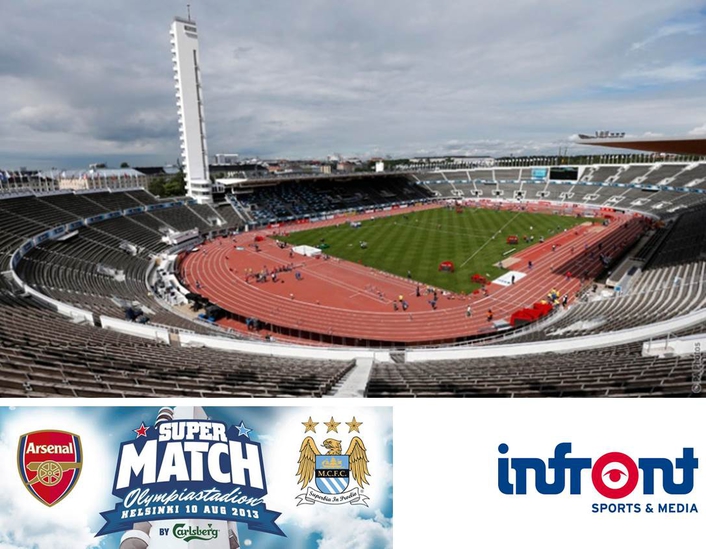 The two Barclays Premier League teams will play the ‘Super Match’ on 10 August 2013 – a real first at the Finnish football venue
Infront Sports & Media is serving as Tour Operator for the upcoming ‘Super Match’ friendly football game scheduled between Arsenal and Manchester City football clubs. Held at the Olympic Stadium in Helsinki, Finland on 10 August 2013, the match will conclude the pre-season preparation of the two top teams – having ranked second and fourth in the 2012/13 Barclays Premier League. Sinebrychoff beer leads the commercial line-up as main sponsor of the event.

Full sell-out approaching
Each team will use the match as one final look at their cadre, which will be featured when the English Premier League kicks off from 17 August, just one week later. Regular tickets went on sale at the beginning of June and are – except some remaining quota issued at a later point in time – completely sold out. More than 34,000 spectators will watch the match live at the stadium. For corporate clients, attractive VIP packages are offered for the ‘Super Match’, which register strong demand from Finland, Great Britain as well as other European countries.

Mikko Vanni, Managing Director of Infront Finland, said: “The Finnish are great football enthusiasts and we are pleased to bring two of the best teams from a major league to the country. For the business community, this event also holds particular appeal - it connects Finland to the best of European football and offers the ideal atmosphere to welcome both international as well as domestic clients and partners.”

Infront markets sponsorship and distributes media rights to the event in the Nordic market. It will also be responsible for operative aspects of the event, from team logistics to event management and implementation. The international sports marketing company is working in close collaboration with sports business expert and entrepreneur Harry “Hjallis” Harkimo and his team as well as with the Swedish agency Sport & Evenemang.

Broadcast to over 100 countries
The event marks the first time in history that two top English Premier League sides will compete in the Finnish capital. It is intended to be the initial event in a series of further ‘Super Match’ games over the next years at the Olympic Stadium. Due to the significant international reputation of Arsenal and Manchester City, media interest is expected to be high. The Finnish National TV channel YLE will manage the host broadcast operations.

This is hugely beneficial not only to fans, but also to the event’s commercial partners. Sinebrychoff beer, a brand of the Carlsberg Group, acts as main domestic sponsor of the ‘Super Match’ along with other partners that include Clear Channel (outdoor advertising) and Edita (printing company). In addition, the City of Helsinki is an institutional partner of the event.

Kirsi Räikkönen, Marketing Director of Sinebrychoff, added: “We are excited about the two Premier League Teams visiting Finland. The situation is favourable to Super Match title sponsor Carlsberg as the brand has a long history of international top football and is the official beer of the English Premier League. We are proud to be part of creating football history for Finnish consumers at the Olympic Stadium.”