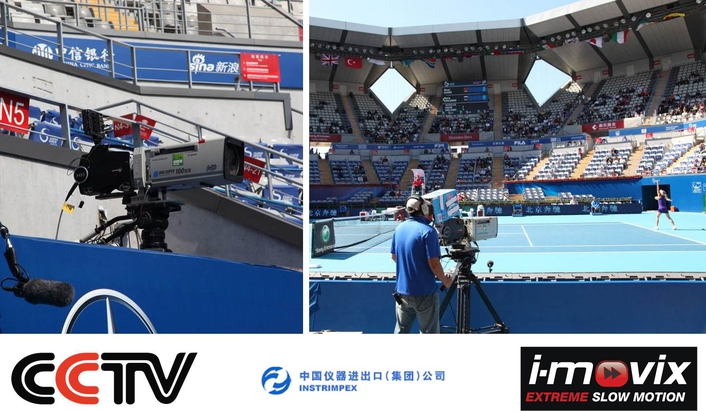 "As a program director of CCTV, I believe the SprintCam system gave us an amazing experience during our operations," said Yan Juang, chief manager, Broadcast Division for CCTV. "My team found it very easy to operate. We tried continually to push the capabilities of the camera: we let the camera be at its best, showing the highest picture quality. I believe the I-MOVIX ultra slow-motion system, after all the improvements that have been made over previous generations of slow-motion in broadcasting, will certainly bring us more and more exciting pictures on TV."

The I-MOVIX SprintCam systems offer a range of solutions for ultra-slow-motion broadcasting, with frame rates in excess of 1000 fps allowing camera operators and producers to create entirely new views of the action. SprintCam systems have a familiar look and feel that fits perfectly with any broadcast operation, with easy integration, rapid deployment, and speedy response in live situations.

"We are very pleased to be bringing the best in ultra-slow-motion technology to the Chinese market," said Mr. Wan Yan, general manager, Instrimpex Instec Import & Export Company. "The new I-MOVIX system made its very successful debut at the Chinese Open Tennis tournament, and now there is great interest in the new views of action that the system can give."

Featuring all the outstanding quality, performance, and usability for which I-MOVIX systems are renowned, SprintCam Vvs HD — the latest in the SprintCam range — delivers an unprecedented level of convenience and creativity in ultra-slow-motion action. New features include a dual output allowing a camera operator to shoot and record at the same time, segmented memory, ramping of speed within a replay, dual output of live action and replay sequences, and integration of both live- and replay-view on the viewfinder. Operational enhancements include compatibility with EVS server ultra-motion mode, digital lens interface for better iris and lens switch control, improved replay controls, support for synchronization of two cameras in 3D ultra slow-motion capture, and a new joystick-equipped control panel.

CCTV — China Central Television — is the major State Television Broadcaster in mainland China. CCTV has a network of 19 channels broadcasting different programs — documentaries, entertainment, sports, etc. — and is accessible to more than one billion viewers.

Instrimpex Instec Import & Export Corporation has been engaged for a long time in technical consultations for the introduction of foreign high-tech products and in the development of high-quality technical services and camera support services. Such rich experience makes them a leading actor on the Chinese market.

I-MOVIX is a Belgian company with market-leading technology in the domain of extreme slow motion (from 150 to 10,000 fps). The company's products, the SprintCam® line, are the first true full broadcast integration solutions for ultra slow motion, offering the unprecedented combination of very high frame rates and instant replay. The technology has applications in live sports and other live TV productions, as well as in commercials, documentaries, feature films, and scientific R&D. The company is headquartered in Europe with a growing global network of distributor partnerships.