Mediapro will produce the match for all broadcast rights holders has received a record number of customisation requests
The international reach of the match is a clear sign that Spanish football is making a huge impact around the world and the clash between Real Madrid and FC Barcelona on Saturday 25th October is further proof. Mediapro is once again producing the international HD broadcast signal for TV rights-holders with a host of channels this season requesting customization services for their viewers.

24 networks have requested the service for the game. The number of accredited channels is also a new record for the game. Canal + Sweden, Canal + Norway, OTE Greece, Belgacom, ESPN Sur and Fox Sports Italy, among others, will provide live coverage of the game as well as match previews and post-match analysis. Canal + Poland, ESPN Brasil, beIN Sports Arabia, beIN Sports France and beIN Sports USA will also have their own OBVan and DSNG at the Santiago Bernabeu for customisation services. In total more than 100 cameras will be covering the game.

The Madrid- Barça game is one of the most important sporting events of the year with the technical deployment and media interest similar to the biggest NBA games or American football clashes, a Champions League final ore ven a World Cup. There is no other domestic competition which generates as much international expectation.

The match will have a potential audience of 400 million viewers but the game time suggests that the total number of viewers will set new records. Miami at 12 mid-day, Bogota and Mexico City at 11, Buenos Aires at 13:00, Montevideo at 14:00, Jerusalem at 19, Bangkok and Jakarta at 23:00 and Dubai at 20:00.

A high-profile sporting event with international impact
The match can be seen in more than 100 countries around the world and some of the biggest international networks have acquired the broadcast rights for the game: Fox Sports Italy, beIN Sports Arabia, beIN Sports France, beIN Sports USA, Canal + Sweden, Canal + Norway, Canal + Africa and ESPN Sur.

The interest which the game has generated has seen places such as the Middle East and Asia request customisation services. Countries with diverse cultures such as Israel via Sport 5; Indonesia, via SCTV; Thailand via RS Channel; Macao on TDM and Vietnam on VTV Channel or even Iceland in the extreme north-east of Europe where the 365 channel will broadcast the game.

Gol Televisión in Spain will also have its own OBVan at its disposal as well exclusive ENG units to provide viewwrs with the very best images from the game. Miguel Ángel Román will provide match commentary alongside a Axel Torres. Rodrigo Fáez pitch-side and Carolina García in and around the VIP area will provide viewers with all the latest news and views from the people who matter. 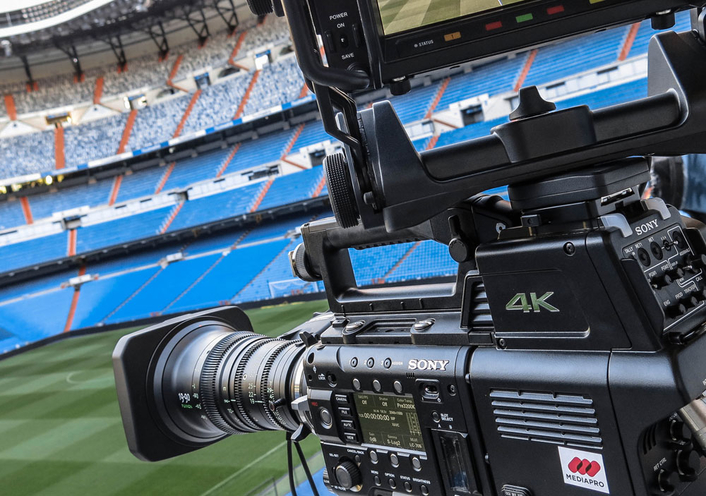 More than 300 staff, 27 cameras and 4K technology will Mediapro carry out the production of one of the most important sporting events of the year. 300 staff including production and technical units will be providing services for both national and international networks. 9 OB vans and a 27-camera set-up at the Santiago Bernabeu. 4 Grass Valley Slow Motion cameras will provide high-quality replay images, two goal-line cameras to see if the ball has crossed the line and a High Speed camera with a 2K Dyno Replay System camera, for high-speed images for spectacular match footage.

In addition, two fully equipped 4K cameras will be in use to provide stitching services as well as capturing high resolution images via the ‘Super Zoom’ camera, providing viewers with an enhanced reality visual experience.

The Mediapro team will also have at its disposal the EVS replay system with XT3 servers bringing viewers the latest, cutting-edge technology along with the EVS MultiReview for rapid response replays in real-time.