How The Cronulla Sharks Use Video To Attract More Fans 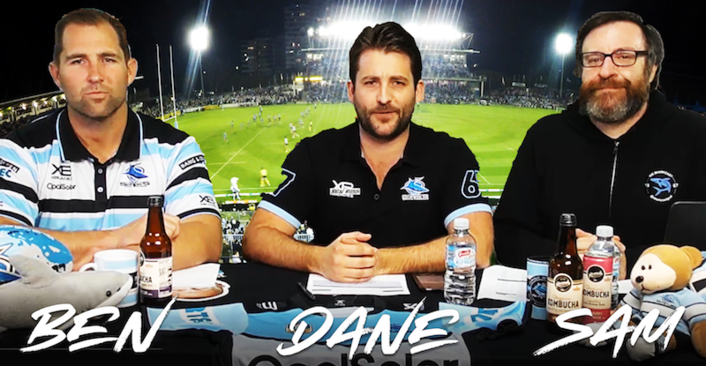 Southern Cross Group Stadium is the proud home of the 2016 NRL Premiership champions the Cronulla Sharks. Based in the Sutherland Shire, Southern Sydney, New South Wales, the Sharks compete in the National Rugby League, Australasia’s premier rugby league competition. Being champions means their stadium is often filled with spectators rooting for, and athletes competing against, the other 15 teams in the NRL.

But in November 2015, the stadium found itself competing with its NRL rivals in a different arena: fan engagement.

That’s when global consulting firm EY put out its Sweeney Report issue comparing the home game experience of venues across the league. And the stadium where the Sharks play, in the Sutherland Shire suburb of Sydney, Australia, came out on top.

The report analysed how clubs attracted ticket buyers, enticed them to make other purchases, and kept them coming back. (After all, keeping spectators happy is not just about the action on the playing field.)

“Part of this process is understanding what people are consuming in the conversation. And when you measure the interaction between the fans and the club, we do that exceptionally well.”

The “Shark Park,” as the team’s stadium is known to its fans, ranked highly against the rest of the NRL in a litany of stats: Best atmosphere in the NRL. Best food and beverage for value. Best for sense of occasion. Top three for pre-game and half-time entertainment.

These are advantages, says the club’s head of digital Scott Maxworthy, to being the only team to own its stadium.

“We can have better, more consistent control over everything the fans experience inside the stadium,” he says.

And as part of the club’s media department, Sharks Media, he realised the greatest opportunity to attract more fans could be the fans themselves.

“We try to stay at the forefront in the digital space in using technology to enhance the experience,” continues Maxworthy.

“Part of this process is understanding what people are consuming in the conversation. And when you measure the interaction between the fans and the club, we do that exceptionally well.”

That’s because the Sharks-fan conversation takes place in a variety of ways, and Sharks Media leverages all of them.

We have ‘Game Days,’ which are the days we produce home games,” he says.

The club also produces a weekly SharksTV – Voice Of The Fans programme on Facebook Live, re-capping the weekend’s match and previewing upcoming contests. And throughout the week it publishes Shark Bites, short fan clips that amplify audience energy into the team’s social media feeds.

In all cases, audience participation – online, on social, and in the stands – can inform both the immediate content and the overall team conversation. And, says Maxworthy, every bit of it makes a difference to the content Shark Media produces.

“For example, we deliver private, non-broadcast commentary for our main game that goes to our corporate ticketholder suites,” he says.

“People in those suites watch the game on the field. But instead of hearing the stadium announcer or broadcast audio, they get ‘Sharkified’ commentary.” That’s the home-team-biased, heavily attitude flavored remarks delivered as though you were hearing your buddies describe the plays (and the refs).

The Sharks Media live stream production takes place in its own green screen studio. This is also located in the stadium complex, about 500 meters from where game production occurs, Maxworthy says.

“Game Day big screen video is produced in the stadium using a TriCaster production system, which we tap into for our streaming show by running the signal by SDI over a long fibre run,” he says.

“We take vision from the stadium, input it to the web streaming system in our production studio, and put that on the green screen. This way, we can make it look like our presenters are sitting within the stadium.”

Historically, this worked well by offering the sense of closeness to the action, but it limited their sources to the camera feed from stadium show. And the distance prevented them from having the high level of spontaneity required for maximum engagement to draw in more visitors on Game Days.

“Because of broadcasting rights, we put our Game Day efforts into doing pre-game shows and things like that, which are focused on capturing that attention in that first two hours before,” Maxworthy says.

“So if the players are warming up on the field before the game, we’ll send some cameras across to the stadium to quickly capture it. Or if the Game Day emcee is entertaining and interacting with the early arrivals, we’ll cross to the stadium and bring that vision into the production.”

Running back and forth to produce packages 500 meters away from where they were capturing the pre-game action meant long turnaround times. So long, in fact, that shooting often had to stop before there were even crowds in the stadium.

“We would film something at the stadium, pre-record, come back, edit, cut, get that into the suite,” Maxworthy says. “But the reality is that about 80% of the fans don’t show up until the last half hour before kick-off, and our show starts an hour before.”

That meant his crew was across the complex in the stadium, Maxworthy says, tasked with a daunting responsibility: “Film nobody, come back and try to cut something interesting, and create a feeling of atmosphere with very few people there.” 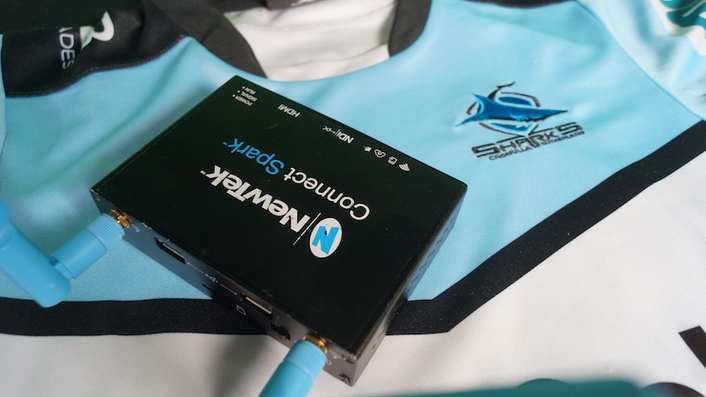 “Our crew plugs a Connect Spark device into one of our cameras. And now, it’s a remote camera that can do fan interviews anywhere in the stadium,” says Maxworthy. “That footage comes back into the production suite, live, and we can use it immediately."

When the NewTek Connect Spark was launched in 2017, it caught Maxworthy’s attention: “All of a sudden, I could see how much greater access we could have.”

Connect Spark encodes video signals from devices that use HDMI connectivity into NDI®, NewTek’s software technology for video over IP. It wirelessly transmits via an IP network, allowing any other device on the same network to input the video coming from that device.

This allows cameras that previously had to be tethered to a video switcher (or connected to an editing system) to instead send the video over the network, in real-time, during shooting. And it opened up a whole new workflow for the Sharks.

“Our crew plugs a Connect Spark device into one of our cameras. And now, it’s a remote camera that can do fan interviews anywhere in the stadium,” says Maxworthy. “That footage comes back into the production suite, live, and we can use it immediately.”

The key, he says, is mobility. “Because you’re not limited to the physical cable, it gives us more mobility without investing thousands in wireless camera-to-point into SDI type of solutions. All of a sudden I can put a remote camera in the stands, and talk to fans out in the stadium.”

But his vision doesn’t end at the edges of the Shark Park complex. “I can put a camera out anywhere across the precinct and feed that in without expensive video capture, encoding, and transmission gear.”

The result is a larger conversation with fans, Maxworthy says. “NDI simply expands our reach beyond three people talking on a screen, to suddenly being a much broader, interactive experience.” 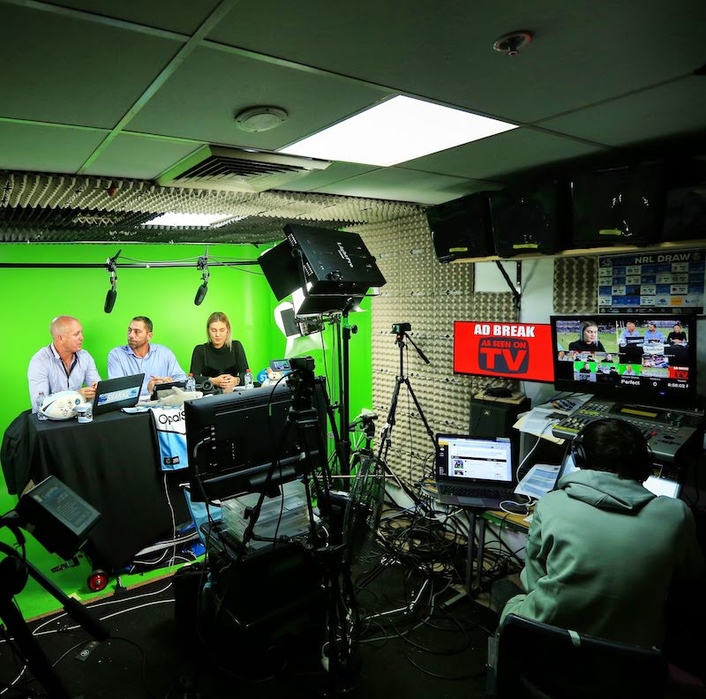 500 meters away in the production studio, NDI is helping Sharks Media’s live streaming programs expand beyond the fan-cam.

Unlike the stadium vision mixer, which is a NewTek TriCaster® multi-camera production system, the Sharks TV production studio uses a web streaming system from Livestream. But because NDI is an open protocol – not limited to NewTek production systems – Maxworthy is able to integrate the green screen studio system into his NDI workflow as well.

And using NewTek NDI Tools, a free download from he NewTek website, any of the other computers on the production studio’s network can also become a real-time video source or output destination in the live production as well.

“NDI integration gives us the ability to bring in about 30 inputs over IP,” says Maxworthy, and so far they’ve only scratched the surface.

“We have about six computers feeding in content across NDI. These could be anything from putting up the Facebook conversations that the presenters are using as part of the shows, to other bits of content such as external video clips I’m running. Or Google Slides graphics that we have as visuals, and video packages the guys are cutting and delivering. Any of these, I’ll put on the machine and feed them in as well.”

But an even bigger promise from the workflow for Maxworthy is its ability to allow participation from non-technical beginners, or emerging talent working on improving their skills.

“As part of our position as a community asset, we run a not-for-profit organisation to help people on difficult learning pathways to get work experience,” he says.

That could be training new talent as commentators, TV presenters or reporters, says Maxworthy. “It involves finding innovative young people, increasing their skill set, and putting them into the roles where they can contribute to our production.”

Since an overwhelming majority of young people can already interact with digital technology, and many with an affinity for multimedia can quickly learn visual creation software, people in the program can see their work make an impact on a show immediately. Even if it’s only a few basic TV graphics.

“What NDI does is move the technology discussion away from hardware,” Maxworthy says. “Production is no longer limited by equipment and cabling. Instead, it’s opening up to include more collaboration and more people.” 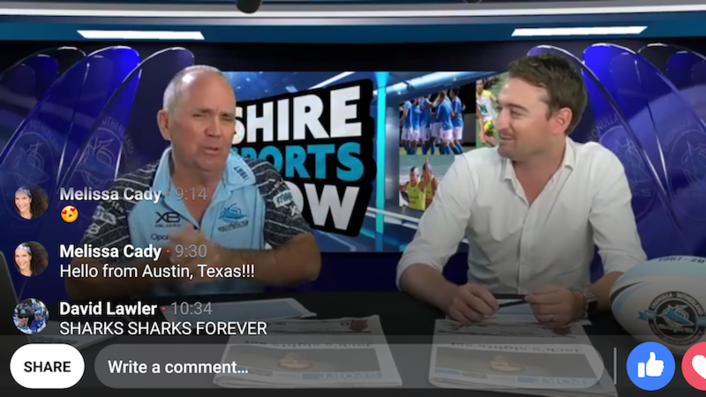 "We put the customer at the centre of it and say, “How do we improve that customer experience?’ With NDI, all of a sudden, we’re able to do that affordably.”

“Athletes don’t play by a script,” says Maxworthy. “Yes, we have our show treatment, but in a competition, anything can happen on the field.” That unpredictability extends to the fans in the stadium. “There may be a play or a call that the audience will respond to—and we need to be responsive as well.”

At the other end of spontaneity are the fan experience activities that take place inside the stadium -sing-alongs, themed sections, and so on – that centre entirely on the stadium’s most important asset: the people inside it.

With untethered, NDI-connected cameras enabling the crew to roam where they need to and land in those fan-focused moments at the right time, Shark Media has found an engaging way to bring more people to the stadium.

At the same time, it brings the action at the stadium to more people at home. A recent Facebook Live programme attracted more than 8,000 viewers with hundreds of fans commenting on the stream in real time.

“And that’s really at the crux of it,” says Maxworthy. “We put the customer at the centre of it and say, “How do we improve that customer experience?’ With NDI, all of a sudden, we’re able to do that affordably.” 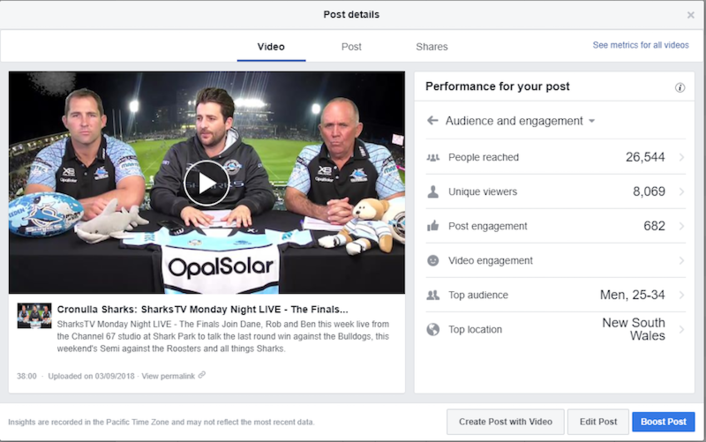