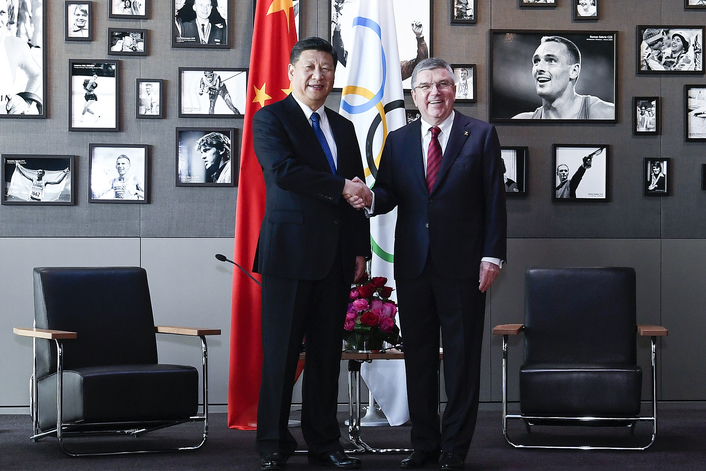 IOC President Thomas Bach welcomed Chinese President Xi Jinping to The Olympic Museum today, in what is the first visit by a Chinese Head of State to the IOC.

In a bilateral meeting, the two leaders highlighted the close cooperation between the IOC and China with regard to the organisation of the Olympic Winter Games Beijing 2022. President Xi expressed his personal commitment to make these Games a success. They also discussed how the already strong ties can be strengthened in the future and how to promote the role of sport in society. Sitting at the original desk belonging to the founder of the Olympic Movement, Pierre de Coubertin, President Xi signed the IOC’s visitors’ book to commemorate his historic visit to the Olympic Capital.

“China and the IOC enjoy excellent relations and strong cooperation on many different levels. The historic visit of President Xi Jinping to the IOC is another expression of this great cooperation and our friendship with the Chinese people,” said President Bach. “This is an excellent foundation to write history once more, with Beijing set to become the first city in the world to host both the summer and winter editions of the Olympic Games.”

In his remarks, President Xi highlighted the important role of sport in China, saying that sport is an integral part of the country’s national development plan: “Over the years, the IOC and President Bach have made important contributions to support the healthy development not only of the Olympic Movement but also the development of sport in China. I would like to express my appreciation for what you have done.” He went on to say: “We have many dreams, the Chinese dream of turning China into a society of prosperity; the dream of promoting the Olympic Movement; and also the dream of fostering a community of shared destiny for the whole of humanity. All the dreams are interconnected and integrated with one another. In this respect, I believe the IOC has a huge role to play to help the fulfilment of all these dreams.”

The International Olympic Committee is a not-for-profit independent international organisation made up of volunteers, which is committed to building a better world through sport. It redistributes more than 90 per cent of its income to the wider sporting movement, which means that every day the equivalent of USD 3.25 million goes to help athletes and sports organisations at all levels around the world.

Olympic Channel’s Mark Parkman: Early success but much to come for multiplatform service
AT&T, DirecTV to carry new Olympic channel in US
Eurosport becomes new European home of the Olympics