With HBS towards the Start of the 2010 FIFA World Cup™

HBS and FIFA
FIFA has appointed Host Broadcast Services (HBS) as the host broadcaster for the 2010 FIFA World Cup South Africa™. HBS’ role includes every single aspect of the production of the multilateral signal as well as providing necessary services and facilities to Media Rights Licensees (MRLs) in order to fulfill their unilateral production needs. This includes the design, construction and set-up of the International Broadcast Centre (IBC).

HBS staff members have been relocating to South Africa 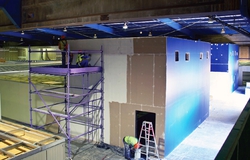 As the start of the 2010 FIFA World Cup™ approaches more and more HBS staff members have been relocating to South Africa to prepare for the operational period. In order for staff to be fully prepared for the complexities of the project each and every employee is required to attend a comprehensive orientation session. The orientation sessions are conducted by HBS Training Senior Manager Tania Pellegrini and include detailed explanations of event-time procedures as well as information about HBS' structure and policies and tips about life in South Africa during the event. 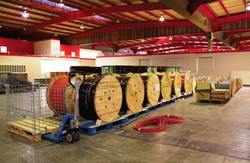 The third session, held at the Astro Tech Conference Centre in Parktown, was an especially important one for HBS as the participants included the management staff of each of the tournament's ten venues who are now based at their respective venues and ready to train their own staff on-site. These staff members include the Broadcast Venue Managers (BVMs), the backbone of broadcast operations at each venue, as well as the Venue Technical Managers (VTMs) and the Venue Logistics Managers (VLMs). They are the main on-site contact points for FIFA and the LOC from now until the end of the FIFA World Cup™; as such it is particularly vital that they be well informed. 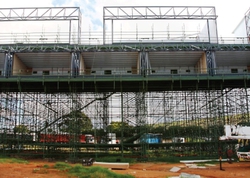 After the orientation session the group was joined by the remainder of the HBS team in South Africa as well as HBS CEO Francis Tellier, who gave a welcome speech. Everyone was then treated to an African tribal show featuring traditional dance routines of the Shangaan, Xhosa and Zulu tribes.

HBS currently has approximately 140 staff members on the ground in South Africa. This number is growing daily and will swell to more than 2,500 by the Opening Match on 11 June. 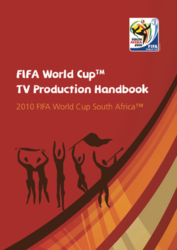 Media Rights Licensees (MRLs) will be able to collect the FIFA World Cup™ TV Production Handbook from 15 May at the IBC Broadcast Information Office (BIO). To collect a Handbook, broadcasters need to present their Accreditation badge (Tournament Pass) which will also be available for collection from the same day (please see IBC Arrival story above). MRLs who prefer to collect their Handbook from one of the ten competition venues will be able to do so from 9 or 10 June onwards, from the venue BIO.

The Handbook is an essential resource for broadcasters as it contains key production and technical information, including specific details on each multilateral feed, as well as the official match card and a DVD highlighting key elements from the Production Plan. Additionally, details regarding services and facilities at both the IBC and venues are provided. The Handbook will also be available as chapter-by-chapter PDF downloads on the FIFA TV Extranet from 15 May.

The Broadcast Information Office (BIO) at the IBC will open to broadcasters on 10 May, the first official arrival date for broadcasters at the IBC. The BIO will be on-hand to provide broadcasters with over-the-counter information and is the first point of contact for general broadcast enquiries. The HBS Booking Office, adjacent to the BIO in Hall 6 of the IBC, also opens on 10 May.

The Host Broadcasting division is in charge of major Host Broadcast contracts for world events such as the FIFA World Cup™ - events which typically run for several weeks; involve several years of planning, possibly the building of an International Broadcast Centre (IBC) and the provision of tailored facilities and services.

The first step is an in-depth audit of the event and the location, to establish what needs to be delivered. Services and facilities are customized to fit the event and the budget parameters. The host broadcast is implemented by HBS' own team of experts; alternatively through short-term joint ventures with other service providers. The prime objectives are to guarantee the resources and experience to deliver "best ever" host coverage, in terms of quality, versatility and reliability and to deliver to Rights Holders across the globe - according to the specific needs of their own audiences - tailored services and cost effective innovations that are the direct result of the constructive relationship that HBS has long established with each and everyone of them.

Host Broadcast Services, fully owned by Infront Sports & Media, is a specialist host broadcast organisation, originally established with the core mandate of producing the television and radio signals for the 2002 and 2006 FIFA World Cups™, , the latter being the first ever FIFA World Cup™ to be delivered, to global acclaim, entirely in High Definition Television.

Established in 1999, Host Broadcast Services (HBS) has gone on building its unique capabilities by combining experienced personnel from previous FIFA World Cups™ with expertise drawn from the very top levels of the television industry.

HBS is based in Switzerland and has its planning headquarters in Boulogne-Paris.

HBS has been appointed by FIFA to be the Host Broadcaster for the 2010 FIFA World Cup™ in South Africa as well as the 2014 FIFA World Cup™ in Brazil and to oversee all other FIFA events (including the FIFA Women’s World Cup, the FIFA U-17 and U-20 World Cups, the FIFA Futsal World Cup and the FIFA Beach Soccer World Cup) from every corner of the globe.

HBS is responsible for producing the multilateral coverage and providing unilateral production, transmission, commentary facilities and associated services for world broadcasters. To achieve this, it designs, builds, installs and manages an International Broadcast Centre (IBC) and the multilateral and unilateral broadcast facilities at every venue in the host country.

In addition, HBS has worked on a wide range of other events and sports, either as host broadcaster, or in a consultancy role, or as a service/facilities provider.

DAGBS has been renamed IGBS (International Games Broadcast Services) and produced the Bali Beach Games 2008. Francis Tellier is also the CEO of IGBS.

From 2008-2012, the company will deliver the host broadcast operations for the French Premier League (Ligue 1) on behalf of the “Ligue de Football Professionnel”, producing more than 300 matches per season.

HBS is proud to have been selected by federations, leagues and world-class event organisers who know that it is a trustworthy, innovative, flexible, user-friendly and cost-effective company. This was recognised when HBS received the prestigious Sportel Golden Podium Awards in 2002 for its production innovations, for its technical achievements in 2006 in the form of the IBC-Amsterdam Judges' Award and in 2007, in London, at the SportBusiness Sports Event Management Awards.

Infront Sports & Media AG - of which HBS is a 100% subsidiary - is an international sports marketing company with an exceptional track record on major events.

Infront has its headquarters in Zug, Switzerland and offices in nine countries. Host Broadcast Services AG is a subsidiary of InfrontSports & Media AG.