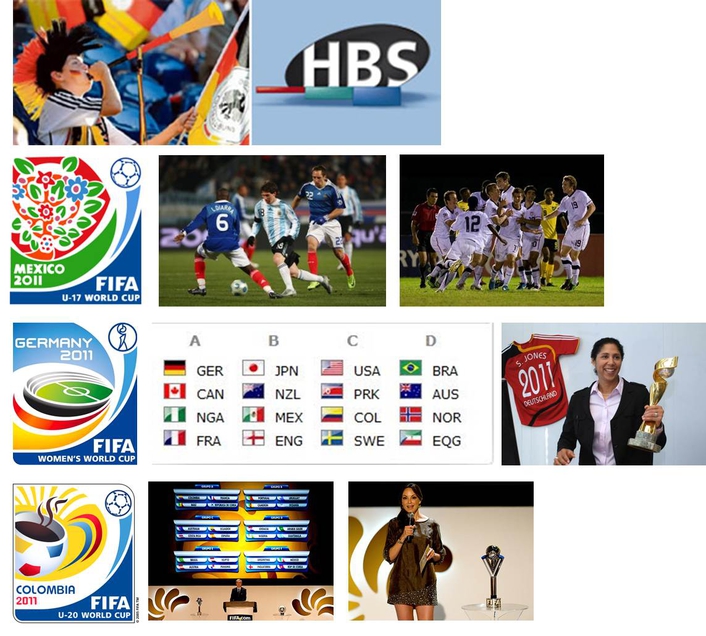 Mexico, Germany, Colombia. HBS crews are hard at work again, on behalf of FIFA, in three locations spread across the globe
On June 18, the FIFA U17 World Cup™ kicked off in Mexico with a crew of HBS staff on site to make sure that all services are being delivered on behalf of FIFA by the local TV station, Televisa. Seven venues are hosting matches until the Final on July 10 (Torreon, Monterey, Queretao, Guadalajara, Pachua, Morelia and Mexico City), mythical names for Football and Cinema aficionados alike. This tournament in Mexico follows suite to the FIFA U17 in Nigeria in 2009, FIFA U17 Korea in 2007 and FIFA U17 in Peru in 2005, with winners respectively being (quite a surprise here!) Switzerland, Nigeria and Mexico.

HBS, as the FIFA dedicated host broadcast organization, has another crew busy on-site in Germany putting the final touch to the broadcast operations. Germany where, during 15 days of coverage, more than 100 hours of transmission time will be produced by 16 HD cameras - plus some special Steadicams, Cable Cams & Aerial Cameras on selected matches that bring the total number up to 18 cameras on this specific event. Five OB vans will be on site, 720 m2 of International Broadcast Coordination Centre will be operated in Frankfurt and put at the disposal of the 4 Match Directors, namely Wolfgang Straub, Knut Fleischmann, Georg Alberts and Thomas Sohns.

This tournament will see the showdown between the 16 best teams in the world in a country where the Frauen Weltmeisterschaft poster, silhouetting a pony-tailed player made up of thousands of tiny iridescent footballs, brings back such fond memories of that other all-time-world-acclaimed success, the 2006 FIFA World Cup™.

The word “Wilkommen” is flying high in all 9 host cities: Augsburg, Berlin (where the Opening Match is being played this Sunday), Bochum, Leverkusen, Monchengladbach, Sinsheim, Wolfsburg and Frankfurt, (venue of the Final on July 17).

The FIFA U20 World Cup™ 2011 in Colombia kicks off on July 29 with another HBS production crew hard at work in the host venues of Pereira, Armenia, Manicale, Cali, Bogota, Barranquilla, Cartagena and Medellin. “Nuestra Fiesta”, the Tournament’s official song, sets the scene of yet another youth competition that HBS is covering on behalf of FIFA, with the support of local resources.