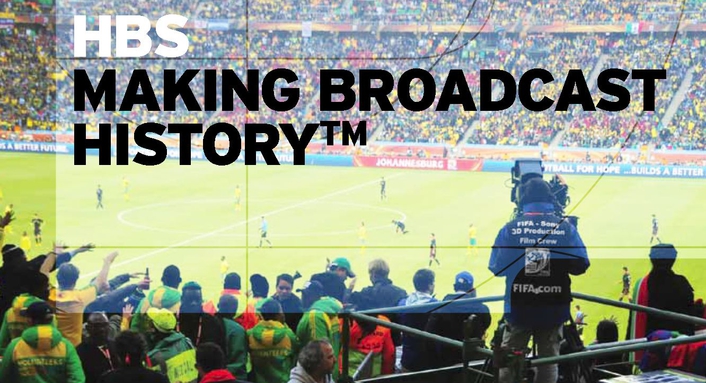 HBS - Every aspect of the production
Host Broadcast Services (HBS) has inspired dramatic changes in the way that the host broadcast of major sports events are handled and is the industry leader in the field. In 2010 HBS – jointly with FIFA, Sony and ESPN received the prestigious IBC Amsterdam 2010 Judges’ Prize for delivering the 2010 FIFA World Cup™ in 3D, and at SPORTELMonaco FIFA received the European Sports TV Audience Award. In a special press conference at SPORTEL Niclas Ericson, Director FIFA TV and Francis Tellier, CEO HBS gave a brief review on the technical aspects of the World Cup in South Africa.

A job for specialists

The host broadcast of major international sports events is now so sophisticated that it is best done by a specialist company. This vital function — once an obligation of the national broadcaster — is now a service of great value to sport, ensuring that the highest quality content is delivered to broadcasters and new media rights licensees worldwide.

HBS is a dedicated, independent host broadcast specialist, helping sports federations, organising committees and rights holders worldwide to broadcast their events in the most exciting and effective way. It provides the full spectrum of host broadcast operations and services, to a highly developed and technologically advanced standard, while also guaranteeing value for money. HBS operates throughout the world and is able to deliver a full solution, wherever the event, whatever the sport, however tough the challenge, delivering true value for money, on budget and on time, living up to its slogan, “Making Broadcast History™”.

Every aspect of the production

HBS’ role could best be summarised as “from pitch to home viewer around the globe.” It includes every aspect of the production of the signal for international sports events, such as the FIFA World Cups™ as well as world feed distribution. The first step is an in-depth audit of the event and location to establish what needs to be delivered. Services and facilities are customised to fit the needs of the event, media rights licensee expectations and budgets. The project is implemented by the company’s team of experts or, alternatively, through short-term joint ventures with other service providers. Responsibilities include contracting and training teams, filming and transmitting the signal, as well as providing media rights licensees with unilateral production, transmission and commentary services and facilities. For big events, where an International Broadcast Centre (IBC) is essential, HBS plans, builds out, manages and dismantles the IBC as well as the multilateral and unilateral on-site broadcast facilities at all venues.

HBS has a highly experienced core team, which defines all projects in management terms by utilising dedicated software, cutting every area into manageable units and then coordinating the various elements to ensure that the project works as a whole. HBS does risk assessment prior to the event and knowledge management, as required.

HBS manages major host broadcast contracts for world sport events working with international federations including: FIFA for the FIFA World Cup™ and all other FIFA events, UEFA for the UEFA EURO and the Olympic Committee of Asia (OCA) for the upcoming Asian Games Ghangzhou 2010 and the Asian Winter Games Astana-Almaty 2011. The company also works with national leagues, such as the Ligue de Football Professionnel for Ligue 1 and Ligue 2 in France, as well as the organisers of multi-sports games.

The events HBS handles typically run for weeks or even months, involve several years of planning, the provision of tailored services and facilities and quite possibly, the creation of an International Broadcast Centre. Its experience across so many sports means that HBS can now cross-fertilise ideas between projects, to achieve cost-effective research and development with key broadcast industry suppliers delivering innovations on a regular basis.

HBS also has an established production division dedicated to expanding the multimedia and production capabilities of the Infront Group and to developing new business in the area of sports production. This division focuses mainly on production-led projects, working on shorter time scales with a lighter infrastructure, such as the FIM Superbike World Championships, FIS World Cups and 3D test programmes at IIHF World Championship and at national football games.

A short Biography of Francis Tellier