Harmonic to Provide MediaGrid and ProMedia Carbon for NBC Olympics 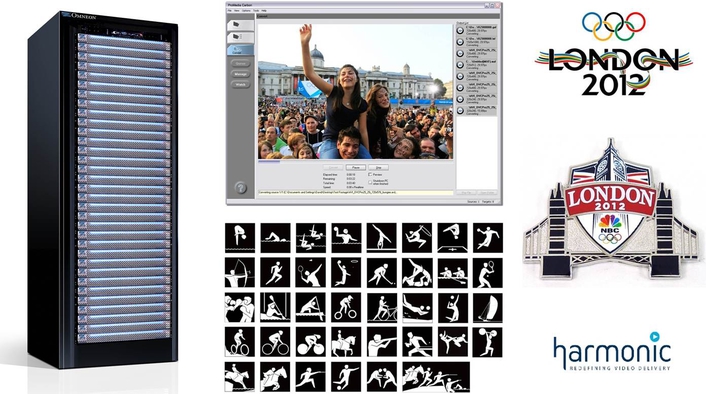 Integration of Omneon Storage With Avid Interplay® and Transcoders Gives NBC Olympics Fast, Flexible Media Access
Harmonic Inc. today announced that it will provide Omneon MediaGrid™ shared storage systems and ProMedia™ Carbon enterprise transcoding software to NBC Olympics, a division of the NBC Sports Group, during its production of the 2012 London Olympic Games from London, England, July 27 – Aug. 12. The announcement was made today by David Mazza, senior vice president of engineering for NBC Olympics, and Matt Adams, Harmonic vice president of broadcast solutions for the Olympics.

The Harmonic media storage and transcoding systems will enable NBC Olympics to process and deliver high-quality content quickly, while relying entirely on digital media in a file-based environment within the NBC Olympics Highlights Factory, which is used to support content creation for NBCOlympics.com, mobile platform distribution, and IPTV and VOD services. The integration of the MediaGrid storage systems with Avid edit and media management systems facilitates a fast, highly efficient file-based highlights production workflow in which all editors have immediate and simultaneous access to content.

To ensure fast turnaround for on-demand content, NBC Olympics will use a ProMedia Carbon transcoding farm to generate the high-quality multiformat video delivered to TVs, PCs, and mobile devices via the NBCOlympics.com website. Supporting an extensive array of acquisition, editing, broadcast, Web, and mobile video formats, ProMedia Carbon minimizes file movement and improves workflow efficiency by enabling all transcoding operations to be performed in place on the MediaGrid file system.

"This is the third consecutive Olympic Games in which Harmonic's solutions have played a critical role in the broadcast workflow," said Adams. "The combination of high performance, management simplicity, and broad support for media applications makes MediaGrid an optimal choice compared with other storage products, and the addition of ProMedia Carbon's broad format support, high-quality output, fast transcoding speed and enterprise-class scalability creates an ideal solution for delivering the vast amount of coverage from live events of this scale."

"When we're able to give our production team unrestricted access to all media, with search tools that help them to find the best shots, we enable them to create segments with high-emotional impact," said Craig Lau, vice president, information technology, NBC Olympics. "We're storytellers at heart, and by facilitating fast, flexible media access, the MediaGrid storage systems with ProMedia Carbon get right at the core of what we're trying to accomplish: telling the stories of the athletes in these Olympic competitions."

During the 2012 London Olympic Games, incoming HD content from different venues will be recorded by Sony XDCAM® XDS-PD1000 systems and transferred along with a low-res proxy to a 288-TB MediaGrid at the International Broadcast Center in London. At the same time, those full-resolution recordings will be replicated and transferred by Harmonic's ProCast™ IP acceleration solution over a 10G circuit to a 432-TB MediaGrid system at NBCUniversal's "30 Rock" facility in New York City. In both London and New York, ProMedia Carbon will perform transcoding of content on the MediaGrid systems.

The Avid Interplay® MAM will give users on both sides of the Atlantic access not only to proxy versions of newly captured content, which they can use to create their shotlists, but also to extensive live logs and stats, scoring, and timing information embedded as metadata. The resulting shotlists will be sent out to distribution outlets or delivered to edit rooms when needed for broadcast. In addition to the MediaGrid and ProMedia Carbon systems at the IBC and at 30 Rock, NBC Olympics will use 72-TB MediaGrid systems along with ProMedia Carbon transcoders at the three largest venues — track and field, gymnastics, and swimming — for storage and processing of content offloaded over a 1-Gbps connection from EVS XT server systems. This model will enable NBC Olympics to keep event footage readily available over the course of a competition.

About NBC Olympics
A division of the NBC Sports Group, NBC Olympics is responsible for producing, programming, and promoting Olympic coverage across the networks of NBCUniversal. It is renowned for its unsurpassed Olympic heritage, award-winning production, and ability to aggregate the largest audiences in U.S. television history.
Having produced every Summer Olympics since Seoul in 1988 and every Winter Olympics since Salt Lake City in 2002, the networks of NBCUniversal are synonymous with the Games in the United States. In 2011, NBCUniversal acquired the U.S. media rights on all platforms to the 2014 Sochi Winter Olympics, the 2016 Rio Summer Olympics, the 2018 Pyeongchang Winter Olympics, and the 2020 Summer Olympics. At the conclusion of the 2020 Games, NBCUniversal will have presented 17 total Olympic Games and 11 consecutive, the most for a U.S. media company in both categories. NBC has won an unprecedented 91 Emmy® Awards for its Olympics coverage, as well as a prestigious Peabody Award for its presentation of the Beijing Opening Ceremony in 2008, which USA Today said was "the best overall Olympic experience ever provided by a U.S. network."
In addition to its unsurpassed heritage and award-winning production, NBCUniversal is known for aggregating large Olympic audiences, as nine of the top 11 most-watched U.S. television events of all time are Olympic Games presented across the networks of NBCUniversal. The Beijing Summer Olympics rank No. 1 with 215 million viewers.

Ericsson to Provide Video...pics' of the London Games
Panasonic and NBC Sports ...c Games in 3D in the U.S.