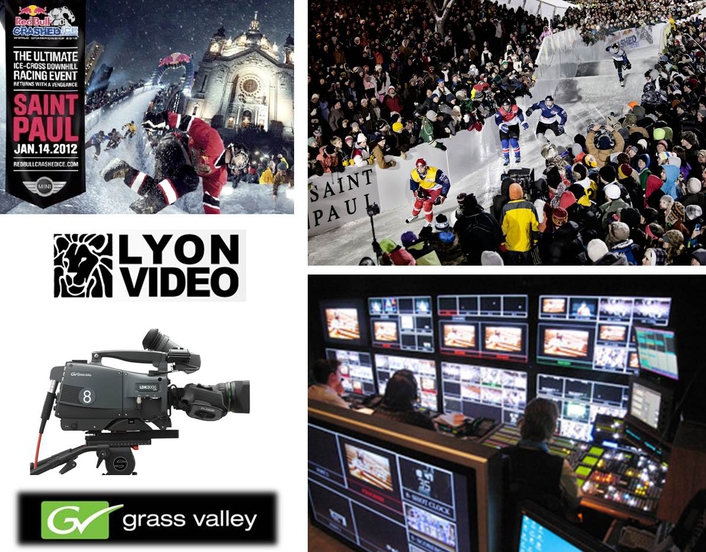 The unique Red Bull Crashed Ice World Championship features competitors on hockey skates racing down a challenging ice-covered course. The action is fast and furious, with very little room for error. A team of four Americans was picked from the St. Paul event and they will now represent the US in the World Championships.

“We were pleased that the production went off very well and that the Grass Valley products were more than up to the task,” said Brent McCoy, Operations Manager at LYON Video and Technical Manager for this Red Bull project. “We were especially pleased that Grass Valley gave us one of their first multiviewer systems for our onboard Trinix router, because it allowed us to keep track of all of the various feeds coming in from the venues. The client was very pleased with the overall results and we’re excited to add multiviewer capability to our other routers soon.”

The LYON team used the 3 M/E Kalypso switcher to handle the live international HD feed and another single M/E Kalypso panel in one of its supporting trucks to display live images of the entire Red Bull Crashed Ice World Championship course on several large presentation screens, set up at The Cathedral of Saint Paul. In the US, NBC broadcast the event a week later (Saturday, Jan 21).

“LYON Video is a valued customer of Grass Valley that continues to push the boundaries of live HD sports production,” said Jeff Rosica, Executive Vice President of Grass Valley. “This event proved once again that our cameras, slow-motion systems, production switchers, routers and now our multiviewer are the best in the business.”

The new Trinix NXT multiviewer option supports infrastructures up to 3 Gb/s while providing up to eight SDI monitor outputs per card, along with powerful audio monitoring and image scaling features that are ideal for simultaneously viewing multiple sources within all types of broadcast control rooms, live production and distribution facilities, and mobile trucks.

About LYON Video
Established in 1986, LYON Video provides mobile television production facilities, full service video and film production, post-production, and DVD authoring.  Located in Columbus, Ohio, our goal is to provide broadcast quality video at an affordable price, both as a sole provider, or working in partnership with agency, corporate, or independent producers.