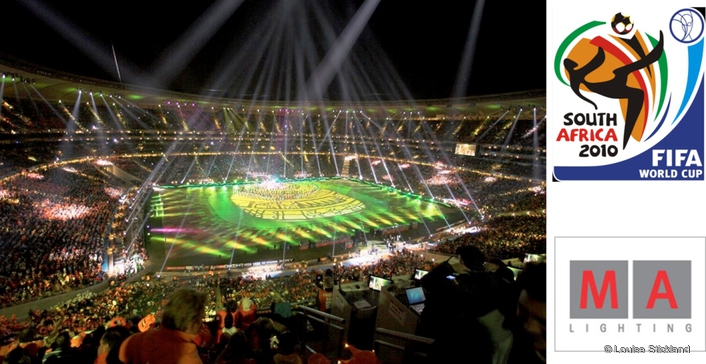 500 high powered light sources controled by three grandMA full-size consoles and a grandMA2 light
Three grandMA full-size consoles and a grandMA2 light were used to control nearly 500 high powered light sources for the colourful and highly acclaimed Closing Ceremony of the 2010 World Cup, staged at Soccer City Stadium, Soweto, Johannesburg. The 2010 Closing Ceremony event was produced by the VWV Group, it featured a cast of 740 including 40 elephant operators and 35 principal artists and has been acclaimed as one of the best and most visually exciting World Cup Closing ceremonies to date.

Spectacular lighting for the occasion was designed by Tim Dunn and Hugh Turner. Dunn also programmed and ran the show, with all the lighting equipment supplied by Gearhouse South Africa. Tim Dunn and Hugh Turner are both experienced lighting designers. Dunn has numerous spectacular stadium shows to his name, which combined with Turner's vast theatrical experience, made them the perfect visuals team to create a memorable, epic lightshow for the occasion. The visual picture was completed with stunning large format projections onto a 55 square metre area in the middle of the pitch - for the first time in South Africa.

grandMA control has been the first choice for both Dunn and Turner for the last four years, ever since Gearhouse South Africa first invested in the platform as the most stable and flexible on the market - so there was never any question about the control kit!

However, with programming time in the actual stadium being tight and only a single full dress rehearsal with the cast scheduled, it was also an opportunity for them to try and relieve some of the pressure by pushing the potential of the MA visualiser grandMA 3D to the maximum. This gave them an invaluable opportunity to programme the show's basic building blocks in advance and be well ahead by the time they could access the venue with all the lights rigged-and-ready. 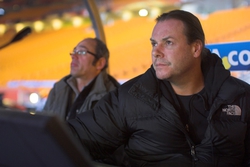 They set up a full grandMA 3D system in a studio a week before arriving on site, together with the show console. Before this, a schematic plan of the stadium had been sourced from the architects, which was refined, re-drawn and imported into grandMA 3D, and then all the lighting positions could be added. Being the first ever entertainment event in the new 95,000 capacity stadium, all the production equipment was installed for the first time in a number of ways including special customised brackets or flown trusses.

All 468 lights were put into their correct positions on the grandMA 3D plot. Dunn & Turner then spent a week pre-programming, discovering what effects worked best with which fixtures, which of the different areas could be lit with best impact, how to get key lighting onto the performers whilst not interfering with the projection, etc, and other major practical and creative decisions.

With such a high profile, high pressure show, the opportunity of using grandMA 3D was "absolutely invaluable" and "A great tool for experienced people," says Tim Dunn. Above all, it enabled them to arrive at Soccer City with a good proportion of the show already in the desk, ready for fine tuning.

Up at the FOH control position, the grandMA2 light was configured as master desk and the one used to monitor the entire system. Then there were two grandMA full-size consoles, the show desk (run in slave mode), used for all the programming and operating, plus the backup desk, run in master mode. The fourth desk was down on the field of play during programming, used for focussing the fixtures that could not be clearly seen from the FOH position, which was half way up the seating stands.

Throughout the week in the stadium, MA's South African distributor DWR Distribution was on hand with technical support if needed, maintaining the great service and enthusiasm for live events for which they are renowned.

VWV has received accolades from all over the world for the colourful, vibrant 30 minute Closing Ceremony, widely recognized as a great visual and aesthetic success, both on the worldwide live telecast and for the capacity audience who packed into Soccer City ahead of the 2010 World Cup Final between Spain and Holland.

Welcome to grandMA world: MA Lighting succeeds at the Expo 2010 in Shanghai
And the Party goes on and on
It’s a Beautiful Thing for grandMA