Sound Engineer Gerhard Rieber behind the mc²56 in the master control room at IBC Warsaw
German football fans can follow the matches of their national team not only on television. ARD Radio also broadcasts live from the UEFA EURO 2012 in Poland and the Ukraine. André Siems and Guido Ringel provided the live commentary for the opening match against Portugal, while the classic face-off between Holland and Germany was tackled by Armin Lehmann and Edgar Endres. Four days later, Edgar Endres and Michael Augustin covered the last group match against Denmark. Throughout these broadcasts, ARD’s technical staff relied on Lawo equipment to provide their listeners with the best audio experience possible.

Logistics
ARD’s master control room is located in the International Broadcast Center (IBC) in Warsaw, within a compound shared by ARD (German Broadcasting Union) and ZDF (Second German Television). A second production facility is located some distance away from the main hub in a container compound in Danzig - and in the direct vicinity of the headquarters of the German national team (DFBQ). All exclusive coverage for ARD’s radio broadcasts is managed from there.

The WDR (West German Broadcasting) has taken on the responsibility for planning, preparing, and implementing the coverage of the UEFA EURO 2012. Within the ARD, WDR acts as the host broadcasters when dealing with the UEFA as well as ZDF. As host broadcaster for the ARD, WDR is not only responsible for organizational and editorial tasks, but also has to take on the technical management for TV and radio broadcasts. To this end, ARD’s existing pool of Lawo equipment was expanded: in total, two crystal consoles, one mc²56 console, and one Nova29 were rented from Lawo’s rental partner Audio Broadcast Services (ABS). The entire setup will be put to use again at the Olympic Games in London.

For the management of all control room tasks, ARD Radio uses software developed specifically for these. Therefore, close cooperation with ABS during every step of the process, from front end to the development division, was instrumental in assuring optimal system integration. “Due to the very positive experiences from this project, we are planning cooperation closely during future projects of this magnitude,” said Manfred Brass, technical director with ARD Radio at the IBC in Warsaw.

Manfred Brass, technical director with ARD Radio at the IBC in Warsaw

The technical preparations were directly connected to the planning for broadcasts from the Olympic Games in London. During a four week test set-up at NDR (North German Broadcasting) in Hamburg, a comprehensive setup for all components was created, configured, and tested. Due to the extremely small time window between packing up in Warsaw and Danzig, transporting the equipment, and setting up in London, both events have to be broadcast using almost identical setups. “In this situation, the strengths of the Lawo system really shine,” explained Brass. 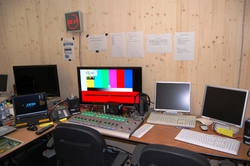 Lawo technology
The self-produced signals, including voice recordings and commentary with self-recorded sound bites, are edited, saved, and transferred to Germany using one extensive, mobile production network. For connecting commentator booths in the stadiums to the MCR in the IBC, the host broadcaster makes use of exclusively reserved ISDN and Ethernet ports. Thus, beside conventional ISDN technology, also Audio over IP connections are available and have already been used successfully. Both technologies can be selected and utilized with an Audiocodec (AETA Scoopy+) of the latest generation. In addition, the host broadcaster delivers all relevant feed signals and supplied in the MCR via MADI to the Nova29 matrix. In this process, some of the software tools developed by ARD, such as the central control module Cassandra, work closely together with the Nova29, Nova17, Nova73HD as well as the crystal consoles. “The Lawo equipment provides the basis for the many in-house developments from the ARD-facilities involved. These complement our portfolio and bring us a long way towards creating a perfect user-oriented workflow. The openly designed interfaces provide the ideal condition for this,” continued Brass. ”Above all, the free and flexible configurability of the crystal consoles, carried out by trained staff, allows for quick adjustments and stands out as one of the most important features of the Lawo system aside from the clarity of the console surface and the overall ease-of-use.”

The crews working in ARD’s production facilities particularly value the clear and well-designed surface of the sturdy and high-quality crystal consoles. Another clear advantage lies in the possibility of central administration: Thanks to this feature, “one of our colleagues in the IBC can centrally implement any short term change requests both here in the IBC and on the crystal consoles in the DFBQ Danzig at the same time, thanks to the data connection between the IBC Warsaw and the DFBQ Danzig,” said Brass.