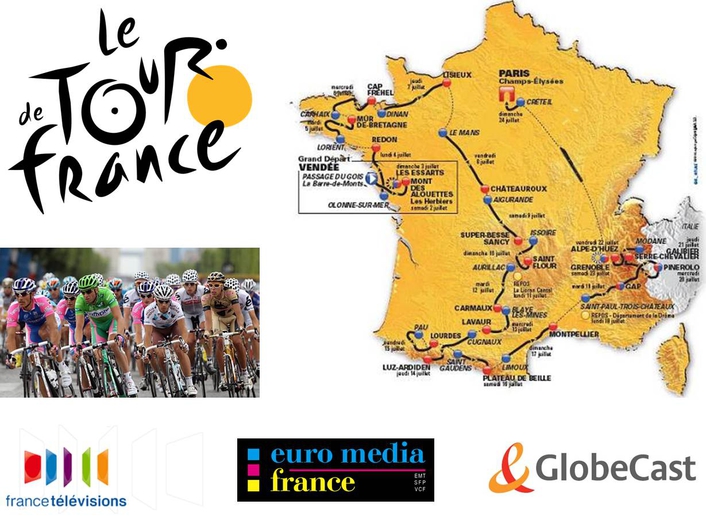 Customized Solution Coordinates and Delivers Footage From Satellite Trucks, Motorcycles, and Helicopters at Each Race Stage
GlobeCast announced today that it is on-site at the Tour de France to provide the French national broadcaster France Télévisions with a complete solution to broadcast every stage of the race. GlobeCast vehicles and teams are present from Saturday, July 2 to Sunday, July 24 to deliver live coverage of the world-renowned cycling competition.

Each day of the race, GlobeCast is delivering 10 hours of satellite transmissions and five hours via microwave for France Télévisions. The mobile units responsible for these transmissions are spread out along the entire course, involving about 30 professionals and technical experts for the length of the race.

GlobeCast's mobile units (21 total) are stationed on the starting line as well as at intermediate points on the course. On the final few kilometers, a digital microwave transmission truck, also operated by GlobeCast, broadcasts coverage of the arrival at each stage. In addition, footage from helicopters and motorcycles will be received at the finish line from the Atlantic Bird 1, Atlantic Bird 2, and Atlantic Bird 3 satellites.

The infrastructure put in place by GlobeCast allows the broadcast of up to 27 simultaneous video feeds to the "hub truck" used by GlobeCast to offer coverage of the race in its entirety. Beyond the sheer technical performance, the implementation of this operation is the result of close collaboration between teams from GlobeCast, outside broadcast production company SFP, and France Télévisions.

"Signal transmission is an essential element in the coverage of the Tour de France," said Yves Dumond, who, as the vice president of sports for France Télévisions, is in charge of production. "For many years, GlobeCast has been a loyal partner for France Televisions; this close collaboration has allowed us each year to improve the technical means that we put in place, until finally arriving at the one we have today, which is world-famous."