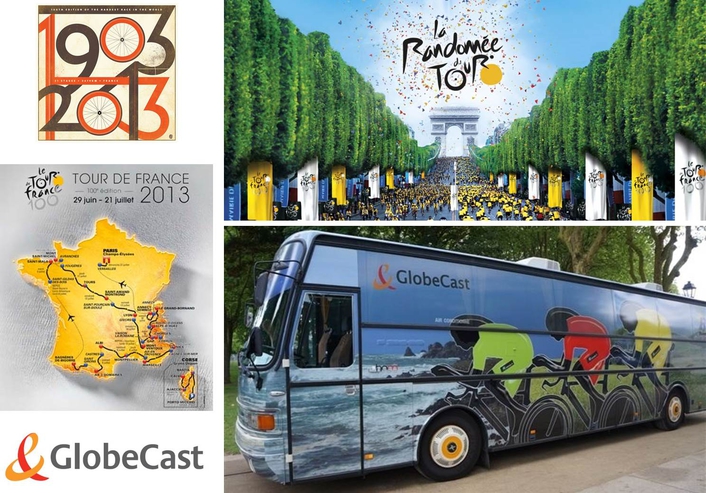 This year, GlobeCast collaborated with Euromedia France to aggregate signals from two helicopters, five motorcycles, and several satellite newsgathering vehicles — covering all stages of the race — into a single broadcast stream that was delivered via satellite to several broadcast customers.

Although GlobeCast has been delivering the Tour de France to global viewers since 1996, its roots in the event go back much further through coverage by its parent company, France Telecom (now Orange). Some of GlobeCast's technicians have been involved in the Tour de France for up to 30 years, and have received numerous distinctions from the Amaury Sport Organisation (ASO), the race organizer.

"In our almost two decades covering the Tour de France, we've seen many changes in the broadcasting landscape including the transition from analog to digital, the evolution in encoding standards from ETSI to MPEG-2 and now MPEG-4, and the emergence of HD television. From our beginnings delivering analog signals, we're now aggregating HD feeds for delivery by satellite and fiber to the four corners of the earth," said Operations Coordinator Philippe Ferrand. "These advances have raised the quality of the viewer's experience to amazing levels, but the spirit of the world's greatest cycling race has remained constant over the past century. We salute the ASO for 100 years of staging this awe-inspiring event for cycling enthusiasts worldwide."

About GlobeCast
A subsidiary of France Telecom/Orange, GlobeCast is a leading provider of media management and global content delivery services for broadcasters and content creators. With a secure fiber and satellite network connected to dozens of teleports, technical operations centers, and points-of-presence worldwide, GlobeCast manages and transports millions of hours of video and other rich media each year. An integrator of audiovisual technology and a full service provider, GlobeCast works with all the actors in the audiovisual chain from production companies to broadcasters, retail organizations, cinema chains, and more. The company provides on-site service from major news and sporting events for coverage in SD, HD, or even 3D. Present in Europe, the Americas, the Middle East, Asia, Africa, and Australia, GlobeCast is also an expert in international television markets, and works with new and established broadcasters to reach and secure distribution with leading pay-TV operators around the world.