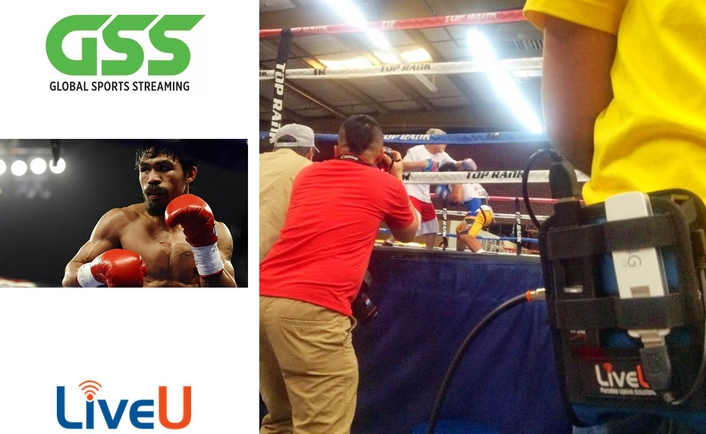 As boxing legend Manny Pacquiao heads to the 66th and final fight of an illustrious career, Team Pacquiao is partnering with Global Sports Streaming (GSS) to bring his dedicated fans a front-row look at his training camp regimen and pre-fight activities through a series of livestreams to Pacquiao’s YouTube Channel. GSS has selected LiveU’s new Solo ‘plug and play’ live streaming bonding solution to connect automatically to YouTube Live. Team Pacquiao is using its social media network to drive the fighter’s more than 12 million fans to his YouTube Channel.

New ‘plug and play’ encoder to deliver live streams to millions of fans on Pacquiao’s YouTube Channel
GSS Producer/Director and Founder Armando Bareno II explained that, “Manny has established a brand that goes well beyond boxing and wants to maintain and grow his fan base for his final fight and future endeavors, which include a political career. Live streaming Manny's workouts is the best way to connect with his fans and grow his channel quickly, while bringing added attention to the upcoming fight in a unique way.

“People want instant access to exciting content about high-profile athletes, celebrities and events they are passionate about; live streaming provides that,” Bareno pointed out. “With Solo, we can deliver that content with greater quality than viewers expect to see online. Live streaming is a powerful tool that we want to take advantage of.”

A former producer of online content, live streaming and broadcast content for Bob Arum’s Top Rank Boxing promotions company, Bareno founded GSS in 2015 and had previously used LiveU video technology, calling himself “a big fan from day one.” He added that “GSS has tested several online streaming solutions, and that Solo worked great, while other options couldn’t match Solo’s portability and struggled in areas of high traffic use.”

“While we can live stream on cell phones like everyone else, the problem with phones generally is the quality,” Bareno said. “But with Solo, we can plug the encoder into a cell phone or a professional camera and receive a higher quality source. It's important because we want Manny’s YouTube Channel and GSS to be known for high-quality professional programming.”
Using cell phones, along with prosumer and professional cameras, GSS scheduled a series of live streams from various outdoor and indoor training locations, culminating with Pacquiao’s arrival at the MGM Grand Arena on fight night.

Following the first live streamed event — Pacquiao’s morning run through Los Angeles’ Griffith Park on March 25 — Bareno reported, “I was really happy with the results. We put Solo under some tough conditions and it performed great. Griffith Park is not a cell phone friendly area, so I was a little concerned going in, but despite the dropouts in expected areas, the Solo pack stayed connected in some tough conditions.”

“Solo solution brings LiveU’s broadcasting expertise to the online media market, delivering a professional-grade live video product, enabling everyone to start streaming at an affordable price,” said Avi Cohen, LiveU Co-founder & COO.” It meets the need of sports organizations and other markets— including entertainment, politics, gaming and worship— for a simple, integrated solution to seamlessly send contribution video over the internet to anyone, anywhere. GSS is among the early adopters of this solution and is effectively leveraging its best-in-class capabilities to deliver an unmatched experience to Manny’s legion of loyal fans.”

About Solo
A robust and high-quality encoder based on LiveU’s field-proven bonding technology, 10 industry patents, and LiveU Reliable Transport (LRT™) integral protocol, LiveU Solo is optimized for online video performance and delivers a rock-solid video stream. It’s designed to fit seamlessly with web streaming workflows and connects automatically to YouTube Live, Wowza Streaming Cloud, Brightcove, as well as other popular CDNs and OVPs.  To make this seamless streaming even more accessible, Solo can be managed and controlled remotely via any web interface or smartphone. For more information about Solo, visit liveu.tv/liveu-solo.

About LiveU
LiveU sets the standard for high-quality and reliable live video acquisition, management and distribution over IP. LiveU's award-winning technology enables live video transmission from any location around the world with lightweight, easy-to-use equipment.  From backpacks to smartphones, and satellite/cellular hybrid to external antenna solutions, LiveU offers a complete range of devices for live video coverage anytime, anywhere. In addition, LiveU offers extensive cloud-based management and video distribution solutions. With top-tier customers in 80+ countries, LiveU’s solutions are being utilized for breaking and developing news and high-profile events, such as the FIFA World Cup™, Winter and Summer Olympic Games, Presidential Campaigns, Super Bowls, US Collegiate Championships and red-carpet events. LiveU’s solutions include multiple 4G LTE/3G, HSPA+, WiMAX and Wi-Fi cellular links, which are optimized for maximum video quality based on the available network conditions.