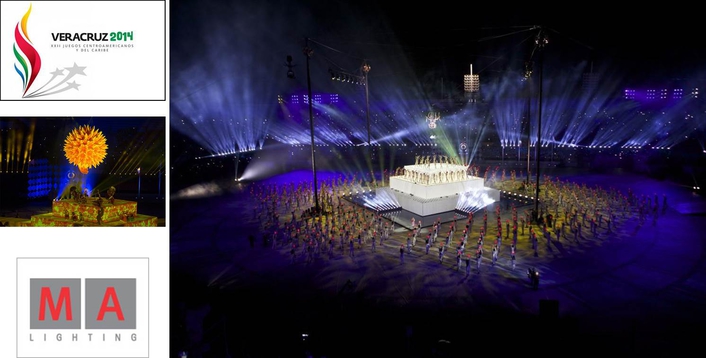 grandMA2 score at the Central American and Caribbean Games
They may be on a smaller scale than the Olympic Games but the 22nd Central American and Caribbean Games packed just as much glitz and glamour into their opening ceremonies in Veracruz, Mexico. Lighting designer David Grill, of David Grill and Associates, Inc. (DGA) in Mahwah, New Jersey, used grandMA2 lighting consoles to illuminate the festivities.

The Central American and Caribbean Games are held every four years with athletes from the region competing in a variety of sports, some of which qualify them for the Pan American Games. The Games were staged in the newly refurbished Estadio Luis ‘Pirata’ Fuente in Veracruz where more than a million people watched approximately 5,700 participating athletes.

“As it was a stadium I specked two grandMA2 light so that one could be mobile from each side of the field,” says lighting director Paul Sonnleitner. “That way, I could program from one position and send the electricians to move the other focus desk to an alternate position without losing precious dark time. Moving anything in a stadium takes time.”

“The onPC system was for the technicians so they could repair fixtures,” he adds. “If I wasn’t in until later in the day, they could also connect to the session, strike up and check out the rig for me without making the lengthy trip to the booth.”

Grill calls the grandMA2 “always easy to use and reliable. The network was flawless, and the desk was outstanding. Stuff that used to take hours and hours on other systems is now just a matter of a wave of the ‘magic wand’.” 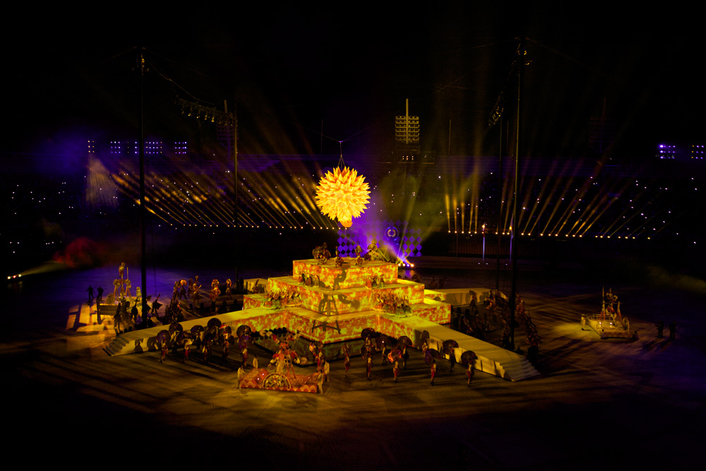 The opening ceremonies featured several different segments in which the event producers used a large amount of projection. “The main challenge was how to use projection as a cyc element with performers in front and light the performers from 450 feet away without eradicating the projections,” Grill explains.

A 30-foot high, three-tiered pyramid-shaped stage was the centerpiece of the opening ceremonies. The all-white structure, which featured three pools, acted as a platform for performances and a projection surface for images.

On the east side of the stadium about 400 feet of the lower balcony rail was rimmed with 108 Clay Paky Sharpy and 32 B-EYE K20. Eight more K20 lined two of the stage’s pools and 18 Sharpy lined the other. Four Robert Juliat Cyrano were mounted on the stage’s followspot platforms.

Grill and his team also lit the Games’ closing ceremonies. Montreal-based Solotech provided the gear. A.C.T Lighting, Inc. is the exclusive distributor of MA Lighting in the USA and Canada.