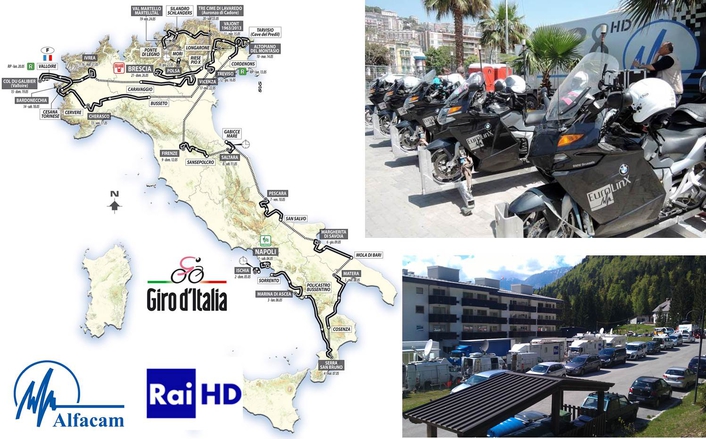 For the first time in the Italian history of public broadcast , the 93th Giro d Italia was broadcast in High Definition 1080i/50
This UCI worldtour race started in Naples - May 4th and finished in hard weather conditions in Brescia. This race crossed Italy 3.317km. Each year, the Giro d’Italia is the first of Europe’s three Grand Tours, with the Tour de France and Vuelta a España following in July and August, respectively. It’s arguably the most important sporting event in Italy and one of the largest in the world.

In advance of the 2013 event, Italian state broadcaster RAI and RCS Sport signed an agreement granting rights of deployment, transmission and utilization of cycling races on television by RCS Sport.

The big difference from previous editions this year is that RAI produce everything in HD for the main fixed cameras and feeds but uses a private RF partner for all wireless coverage : “Eurolinx”. Feeds are also broadcasted in HD on channel 501 of the digital terrestrial service, DTTV and the usual satellite platform in TV sat.

The TV compound this year was totally interconnected by optical fiber to a central ‘star like’-hub that collects all the signals.

It collates the ops of all OB vans, peripheral equipment, commentator locations on the grandstand near the finish line and the studio where the RAI Sport programme Il Processo Alla Tappa .

For broadcast production of the Giro D’Italia, two RAI OB vans ( “Rome Unit 7” and “Unit Milan” ) where deployed: one to take care of the production process for RAI Sport; the other for the international HD worldfeed viewed in 173 nations.

In fact, as per the four-year agreement between rights’ owner RCS Sport and RAI, two different feeds where created and distributed. 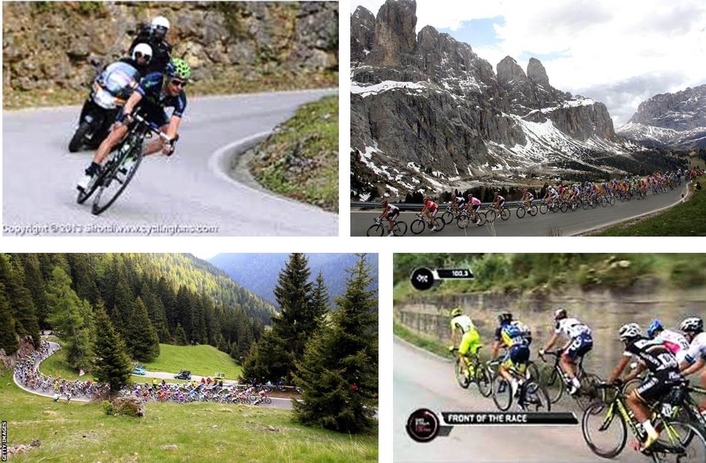 The worldfeed was Full HD and part of a workflow that involves the positioning of 11 cameras on the ground near the finish besides all HD - RF signals.

NEW ! 2013 – ‘Alfacam’ wireless company ‘EUROLINX ‘
As a world premiere during this year’s Giro was the fact that all wireless links where delivered by the Belgium company Eurolinx , a 100% Alfacam Group company .

Alfacam / Eurolinx - at the moment in a full re-organization and takeover  , delivered 8 motorbikes – 3 helicopters – 1 Beachcraft KingAir airplane ‘B200’ and a reception base with auto tracking antenna – controlled by GPS and a total of 20 RF and productional crew.

Really new and innovating was the usage of a upgraded and new encoding system – since the London Olympics games  - Eurolinx renewed there main RF systems and upgraded his encoding .

4 TV HD motorbikes ( BMWs )  in addition a fifth RF motorbike for ENG shooting and extra contributions to any news reports was in course feed directly via the fixed wing B200 relay airplane into the media servers for content and play outs, while two Cineflex V-14 cameras where installed on 2 helicopters – type Eurocopter AS355 to guarantee top and high altitude beauty shots. 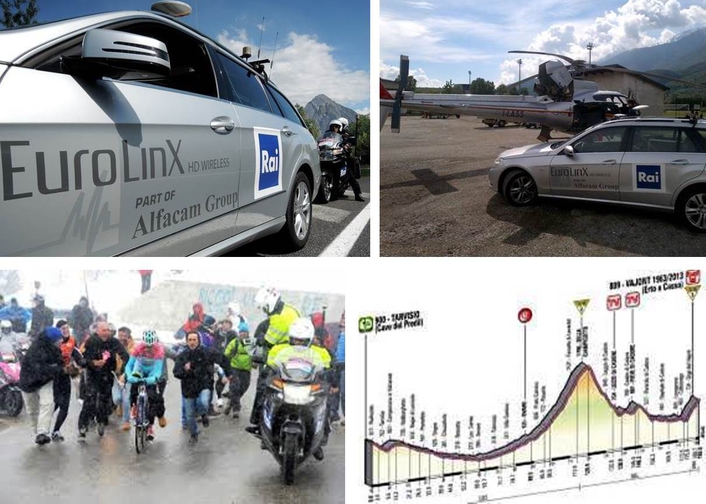 All cameras in motion obviously worked  in RF on a very high performing 12mbit low delay link towards the Eurolinx B200 airplane or towards a 3rd relais back up helicopter. RF path could be switched automatic between all sources and all flying objects to adapt on all current race situations – altitudes and weather conditions.

Due to the fact that this years edition was held in extreme weather conditions Eurolinx could deliver all HD RF feeds nonstop – even if helicopters stayed in the valley during heavy snow.

Seeing cyclists arriving live in snow at 2.250m altitude – with a visibility of 3meters - was never been done before .
Sports journalists – worldwide – underlined that these footage was never been seen before and made the Giro even more epic!

Almost all stages where tracked and received on fixed points in the Dolomits and the Alps , thanks to the extreme high flight altitudes – pressurised (28.000ft) and very robust low delay RF links.

Without these flight levels Eurolinx would never have been able to deliver this result in the high Alps. Communication – tally – intercom and all feeds where connected via satellite links on IP.

So less transport in the mountains – less logistical hassle – RX site was carefully chosen to overlook all mountains stages, so last minute track changes didn’t really had an impact.

As Eurolinx could guarantee all 5 bike feeds together with 2 helicopter feed nonstop , all 7 different RF signals where then streamed on a RAI website , IP-wise for a domestic second Screen Application. Becoming a kind of a director yourself - never been done before on a cycling race.

Also very attractive for cycling lovers was the nonstop  “ 4 picture in picture feed ” on a 52km timetrial on a mountain,
where you follow close the battle between: Nibali – Wiggins – Cadel Evans and Matthew Goss in 1 frame. Experienced RF engineers know how difficult time trials are, specially in mountain conditions.