Fox Sports’ coverage of its first major golf tournament enters the weekend with plans for hole mics to make their debut and its team of more than 500 technical crew and 100 production staff to build on the experience they gained during days one and two, and the execs expecting to see TV viewership outpace last year’s ratings as it has done for the first two days writes Ken Kerschbaumer for SVG.

Brad Cheney, director of technical operations, Fox Sports, has overseen much of the project for the past year and has been onsite since June 9 to make sure 61 miles of fiber was laid as the foundation of coverage and Game Creek Video’s new Encore production unit, built specifically with this event in mind, was ready to fire on all cylinders. 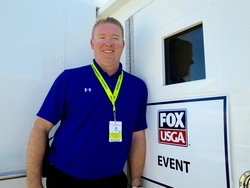 “At the end of the day Wednesday, we did our rehearsal, and you have the sense that we’re going to do this and we’re going to do it well,” says Cheney. “And I honestly could not have asked for a better group of vendors and staff to work with.”

He cites the seamless transition of coverage on Thursday from FS1 to Fox Sports as one of the big moments and says it looks like viewers agreed: the primetime viewership on Fox was twice that of last year’s opening round, and the entire day’s coverage drew the largest audience (2 million) since the 2002 U.S. Open (2.3 million).

Key to the entire effort is Game Creek Video’s Encore production unit, a three-trailer unit whose physical-design innovations allow the trailers to expand to a larger size than previous vehicles. But given the number of camera sources (119) and replay channels (more than 150), and the desire to have as many of them as possible on view in the front bench, there was a need for innovation in routing as the unit has an Evertz IP-based router at its core.

“I don’t think there is a truck in the world that could have handled this show,” says Cheney. “Nothing else comes close to the physical and technological size of Encore.”

Other Game Creek units in use by Fox are Pride, which is handling the studio show, and Glory and Justice, working on the U.S. Open 360 stream as well as the featured-group and featured-hole streams. 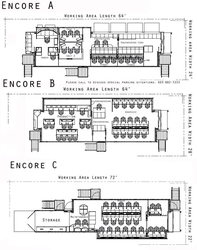 Setting Up the Course
Each U.S. Open course is different, and Chambers Bay is no exception. A traditional links course, it seems like it would be more at home in Scotland than in Washington, and it also features only one tree. It also has elevation changes that can challenge spectator, production professional, and golfer alike.

“You can’t really hide the cables, and the walk paths aren’t as defined,” says Cheney. “But the USGA worked to find solutions to give great access to the spectators and partners and to also enhance the broadcast.”

More than 61 miles of fiber cable with 24 strands each was laid down, and Cheney says the largest challenge was the decision to add the Protracer system to every hole.

“It added a substantial amount of fiber to every green and tee, and CP Communications has been great in providing that,” says Cheney. All told, there are more than 850 strands of fiber coming in from the course.

RF specialist BSI played a big part in getting the course ready for coverage, with a total of 30 wireless mics and 28 wireless camera paths (22 for Fox, six for the international feed) from the course to the compound. As a result, BSI is using spectrum not only in the 1.4 GHz band but also 2.2 GHz and 7 GHz. Each receive site on the course has a fiber box for each band. 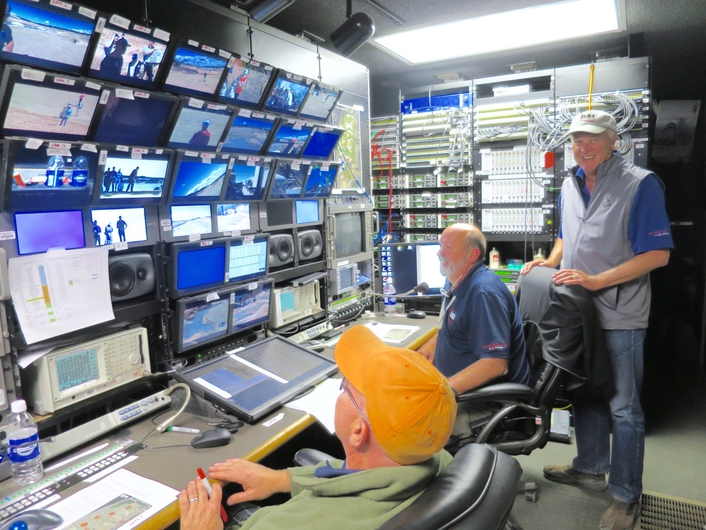 RF specialist BSI played a big part in getting the course ready for coverage, with a total of 30 wireless mics and 28 wireless camera paths (22 for Fox, six for the international feed) from the course to the compound. As a result, BSI is using spectrum not only in the 1.4 GHz band but also 2.2 GHz and 7 GHz. Each receive site on the course has a fiber box for each band.

The RF setup was challenging, explains BSI GM Peter Larsson: “We used the standard Google Earth map for our initial survey, and, when we saw there was only one tree, we were high-fiving because it looked like a slam dunk. But then we came here for a survey with Brad and saw it would be a little different as there are elevation changes and the bunkers are so deep you can stand in them and no one can see you.” 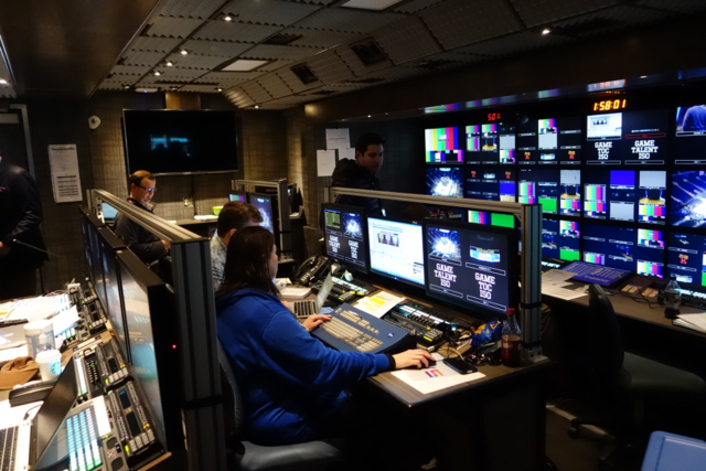 Covering the Action
The coverage on Fox Sports quickly demonstrates one of the many innovations the network is bringing to golf production. For example, from the very beginning, the goal was to provide a view of the course that was a bit more in line with what the golfer sees. That means less reliance on traditional high golf towers and more on RF cameras, lower towers, and things like the Monopod system.

“We have nine Monopod systems on the course, custom-built through work with TMB,” says Cheney. The systems can be moved around the course, are mounted into a tower structure, and allow the camera to swing around 360 degrees and adjust in height between 30 and 45 in. The camera operator is connected to the Monopod, which has an effective ballast of 5,000 lb.

Other cameras designed to give a new look include two DropCams, a camera from Inertia Unlimited that is mounted on a mini stick.“It’s great for bunker shots and allows us to get closer without being obtrusive,” says Cheney.

Also on the course are three 4K RF Inertia Unlimited X-Mo systems: two handheld, the third mounted. The hard camera moves from the third fairway to the 17th green and makes use of the Aja Corvid Ultra to process the content.

There are also chase cams at the first and 10th tees and 18th green and a camera mounted on a Freefly Tero miniature remote-controlled vehicle on the 18th fairway. Five ENG camera operators are also using a mix of Sony F55 and Red Dragon cameras to capture video and send it back to the compound as files via media drop points on the course and in the compound. The footage is ingested into an Avid ISIS SAN with 256 TB of storage that is also connected to Fox in Los Angeles and a post house in Connecticut via two 1-GB pipes that use Signiant and Aspera to transfer the files. 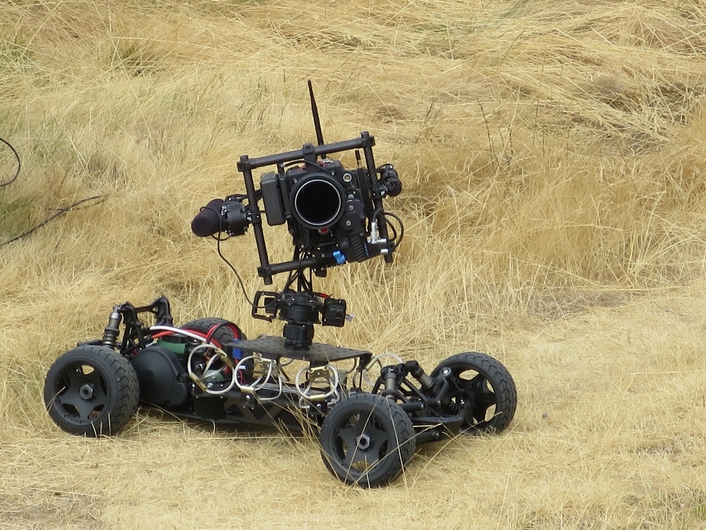 Of course, golf coverage does require crane and aerial coverage, and that is supplied by two large Strada cranes, one behind the ninth green and another behind the 18th green.

Robovision also is on hand, providing 32 robotic systems as well as three railcams, two of which are used at the Fox studio and the third on a 125-ft.-long rail alongside the 18th fairway.

And a drone camera, operated by HeliVideo Productions of Austin, TX, has also been worked into live coverage, thanks to Puget Sound. Flight restrictions require drone operation to be farther than 500 ft. from civilians, and the Sound gives the pilot a chance to fly over the water, complying with the 500-ft. zone, and capture live shots during play.

“HeliVideo owner Eric Austin and his team have done a spectacular job and spent a lot of time working with the city of University Place, the FAA, and the USGA to make it all work,” says Cheney. “This is the first time a drone has been used live at a large event like this, and we hope to prove to the governing bodies that we can do these things safely if you find the right people and have the right practices.”

The Need To Innovate
The Fox Sports production and technical teams spent a lot of time testing not only new technologies but new workflows that include making sure every shot is recorded and always available for use.“The EVS servers are at the core and are recording everything at all times,” he says. “And, on Tuesday morning, that saved us as we were on-air when somebody holed out [during practice] on the ninth hole and we had it.” 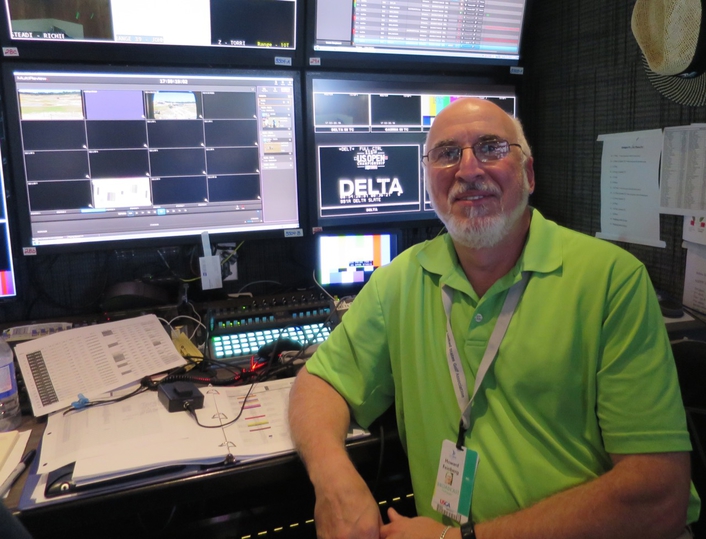 One key new tool to the workflow is the EVS MultiReviewer system that allows the EVS operator to call up templates for different holes and see all the available camera angles on screen. A production-team member can request a specific timecode, and the operator can punch in that timecode and bring all feeds in the template back in time and completely in sync. They can then create a playlist of clips out of those feeds for playout.

“It allows the user to recut coverage in a linear fashion, and they can even choose the first shot and have it play out while the next shot is being cut,” says Cheney. “You can edit it and make the playout list as great as you want.” 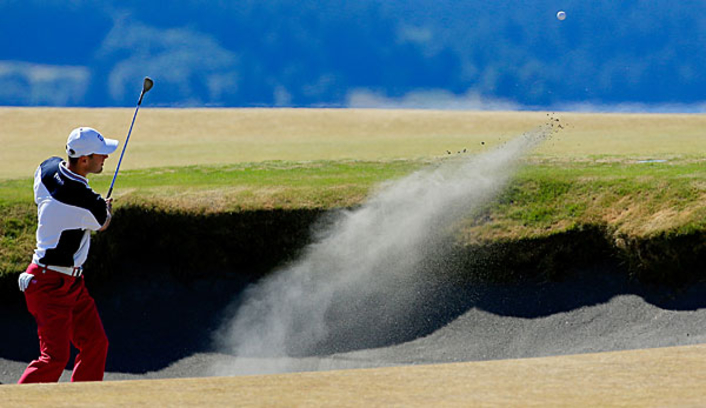 Audio plays a big part in every Fox Sports effort, and the Open is no exception. Another new workflow feature is having all 16 channels of audio from every hole available to be remixed, including on iso feeds.

“The release mixer can pump up the tee mic to hear the crowd reaction,” adds Cheney,“and that process adds to the production value.”

The third round saw the debut of the hole mics, built by Quantum 5X. Those mic signals and more than 200 other audio paths are handled by three audio mixers for the digital streams, four iso mixers, a sub and release mixer, and a main mixer. 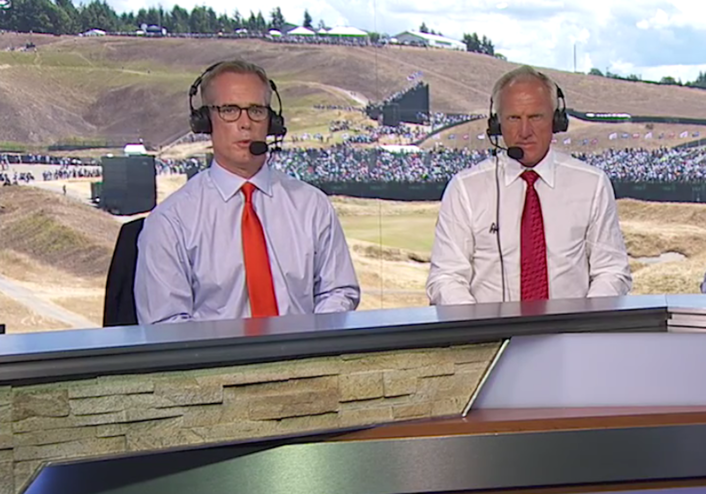 And then there are the graphic enhancements. Shaded Green, designed by Hawk-Eye Innovations, allows the production team to integrate a contour map of six greens into a live camera feed.

“It can chromakey an image map of the green that shows the contours of the green and allows the camera operator to zoom in,” says Cheney.

And Protracer and Sportvision are working together to deliver Protracer coverage on many more shots than most productions attempt; Sportvision is handling a graphic insert that points to the pin and also displays the remaining distance.

It is all part of a production that is, in many respects, a grand experiment that will no doubt be refined next year when the U.S. Open takes place at the Oakmont Country Club in Oakmont, PA.