New production technoligies will enhance the experience for spectators
For the first time in history of the Four Hills Tournament all four jumping events in Oberstdorf, Garmisch-Partenkirchen, Innsbruck and Bischofshofen will be produced by the host broadcasters ARD, ORF and ZDF in High Definition: Spectators can see the world’s best ski jumpers in unprecedented brilliance and resolution on the their TV screens at home. TV viewers can also look forward to experience the jumping events from new and extraordinary viewpoints.

ZDF will broadcast the event from Oberstdorf with a total of 33 cameras including a Fly-Cam which covers the flight of the athletes from take-off to landing. ARD (represented by Bayerischer Rundfunk) will test in Garmisch-Partenkirchen a new remote controlled analysis camera which is located at the calculation point of the hill. The images of this camera will give the TV spectators the impression as if the athletes will jump directly into their living rooms. In addition both broadcasters will signals from cameras installed in helicopters.

At the beginning of each event the former Austrian world cup participant Florian Liegel will jump down each hill with a camera mounted on his helmet. The spectators at the events will see the images from the helmet camera on large LED displays at the venue. Also for the first time the ski jumping fans in the arenas will see the “magic line” – formerly only seen by TV viewers. LED technology will display the so-called “best-to beat line” onto the landing area, indicating how far the athlete has to jump to lead the competition. 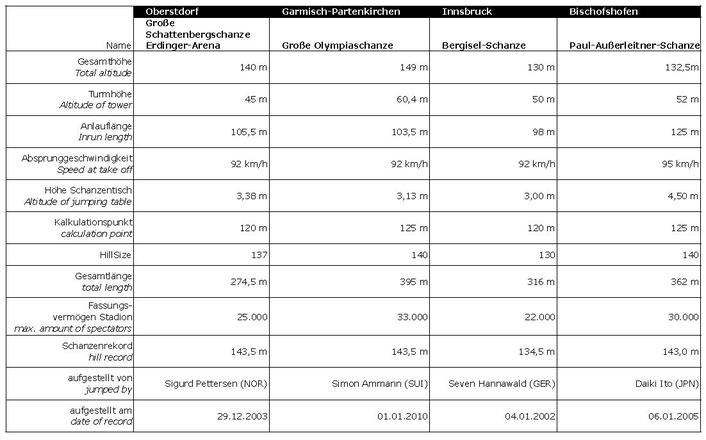 Technical Specifications of the Jumping Hills