Electro-Voice systems provided sound reinforcement on New Year's Day for the second leg of the Four Hills Tournament
What the four Grand Slam tournaments are to tennis, and the four Majors to golf, the Four Hills Tournament is to ski jumping. The four legs (Oberstdorf, Garmisch-Partenkirchen, Innsbruck and Bischofshofen) of the Vierschanzentournee, as it's known in the vernacular, are the competitions that are the most keenly contested, the most widely watched, and in which victory carries the most prestige. Such has long been the case. In fact, this winter's was the sixtieth edition of the tournament, so the level of interest among spectators and in the media was especially high.

Despite adverse weather conditions, over 18,000 fans made their way to Garmisch-Partenkirchen on New Year's Day to watch the tournament's second leg. To ensure spectators were kept abreast of the unfolding competition and their spirits maintained during lulls in the action, for the fourteenth year running the organizers hired TC Showtechnik of Weilheim to provide the sound reinforcement. With the experience of previous events to guide them, the team led by managing directors Martin Schulze and Stefan Rehthaler has been steadily refining its sound reinforcement design over the years; however, in 2012 they introduced a significant novelty by adding an Electro-Voice XLC line-array to the mix.

"In previous years we used an XLD, but whilst we remain fans of that system – its new 90° enclosures really add to the fun – we decided that here in Garmisch, with a spectator area of over 160 metres to cover this year, a double 8-inch system would be hard-pushed to cope." Since the position of the PA towers also had to be changed, Schulze, Rehthaler & Co. decided something larger was called for: an XLC system composed of 127DVX array elements. Whilst the two systems are of equal excellence in terms intelligibility and ease of use, the longer throw of the XLC's tweeters made it the more logical choice this year.

On the 14-metre-high main tower, twelve XLC enclosures complemented by eight DYNACORD V 17 and nine DYNACORD V 18 PWH subwoofers, flown and stacked respectively, provided not only the high sound pressure levels needed but first class intelligibility into the bargain. To ensure homogeneous coverage throughout the spectator area, TC Showtechnik put in place a delay system comprising two XLVC line-arrays made up of twelve Electro-Voice XLE elements each. These were driven by Electro-Voice CPS 8.5, CPS 4.10, and CPS 4000 power amplifiers, while in the VIP tent DYNACORD D 8 loudspeakers and an MP7 power mixer held court. 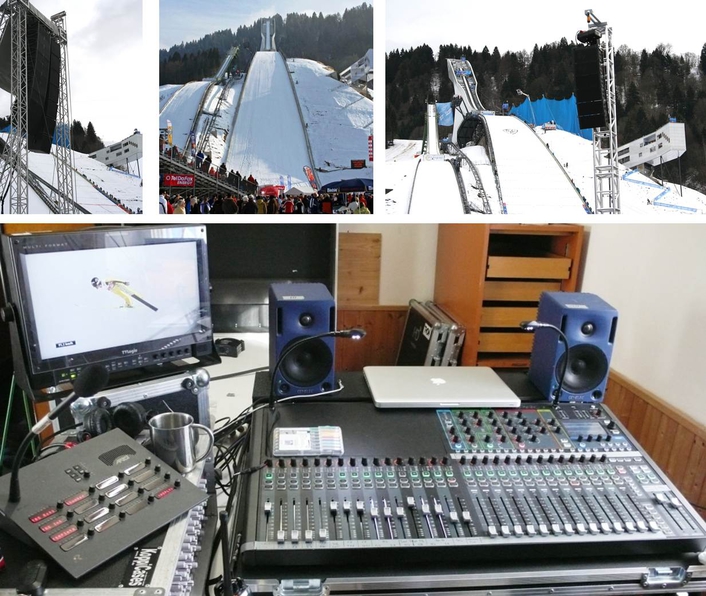 "In Electro-Voice, we have a truly innovative manufacturer on our side," says Schulze. "In Garmisch, we opted for an N8000-1500 controller with eight analogue and eight ASEBU inputs as well as eight analogue outputs for the FOH along with CPS multi-channel amplifiers. An additional N8000-1500 digital audio matrix was used at the PA tower. This had 16 analogue output channels as well as eight of the ASEBU outputs used by the CPS amplifiers. The two controllers were integrated by means of DM-1 cards to create a Dante audio network. IRIS-Net software made it possible to supervise and control all the audio components at all times. Multiple digital matrix controllers forming a single digital network controlled by a portable computer – no other manufacturer offers that kind of flexibility!"