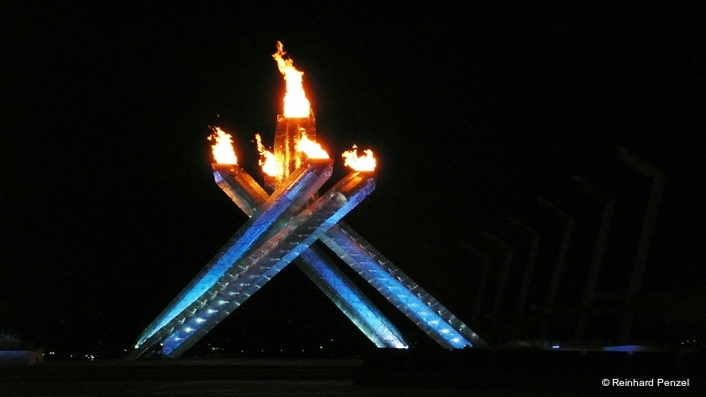 The Olympic Flame in Vancouver
German pin-up Magdalena Neuner will be chasing her third Olympic medal in Thursday's 15km individual event as the Germany team look to underline their status as biathlon queens.

Maelle Ricker became the first Canadian woman to win Olympic gold on home ground when she claimed victory in the snowboard cross on Tuesday.

Germany's Tatjana Huefner claimed gold in the women's singles on Tuesday as the German team threaten to sweep all three luge titles at the 2010 Olympic Winter Games. 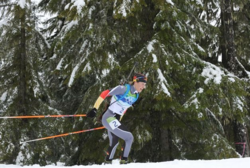 Neuner's gold medal in Tuesday's 10km pursuit was the Germany team's 15th in Olympic Winter Games history and their 40th overall.Germany has won at least one medal in the individual event every year since biathlon was added to the women's Olympic program in 1992 and are expected to be amongst the medallists in the women's 15km individual event.Neuner, the defending World Cup 15km champion, will start as favourite alongside Sweden’s Helena Jonsson and Anna Carin Olofsson-Zidek who are first and second in the overall World Cup rankings.There is plenty of experience amongst the rest of the Germans with Andrea Henkel, the gold medallist in 2002, looking to repeat her success from Salt Lake City.And Kati Wilhem, a master sargeant in the German army, is the defending World champion in the event and looking for her fourth Olympic gold medal.But they could all be beaten by Simone Hauswald, who has good memories of the course here having won the 15km event at the test event held at Whistler Olympic Park in March 2009. Tora Berger of Norway will be one to watch as well as she is one of the most consistent competitors.Only one non-European biathlete - Canada's Myriam Bedard in 1994 at Lillehammer - has won a biathlon medal and that does not look like changing in Whistler.The athletes start at 30 second intervals and between loops of a cross-country circuit, each racer will stop four times to take five shots at a target 50 meters away, twice each in the prone and standing positions.In the individual event, the penalty for a miss is one additional minute which is added to the biathletes time and the winner has the fastest overall time. 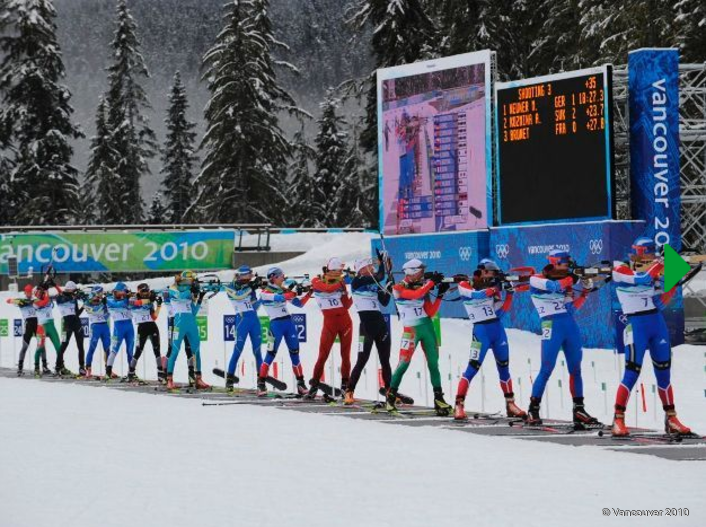 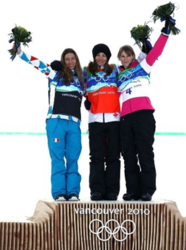 Two days after Alexandre Bilodeau's win in the men's moguls freestyle had ended the hosts' long, painful wait for an Olympic title after two barren campaigns in Montreal in 1976 and Calgary 1988, Ricker made up for the disappointment she suffered in Turin four years ago.At those Games, she crashed in the final and was treated in hospital for concussion.France's Deborah Anthonioz took silver while Olivia Nobs of Switzerland claimed bronze."I tried to explode out of the gate. I really wanted to get out of that gate as fast as I can," said 31-year-old Ricker, a native of Vancouver, and the current World Cup leader."It was really, really hard today to get a clean run all the way down the course, but I just held on and did my best. I was really just focusing on doing the run going through."The event proved one to forget again for American rider Lindsey Jacobellis, who lost gold in Turin when, celebrating too early, she fell and had to be content with silverOn Tuesday, she fumbled a landing off the first jump in the semi-final and missed a gate. World champion Helene Olafsen of Norway was edged out of the podium, crashing in the middle part of the course when she was fighting with Nobs for the silver medal. 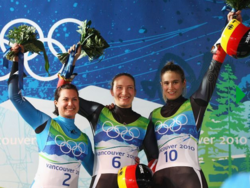 Huefner posted the fastest time of 2mins 46.524sec over the four runs while Austria's Nina Reithmayer claimed second at 0.490sec behind with Germany's Natalie Geisenberger third, 0.577sec off the pace.With the body of Nodar Kumaritashvili flown home to Georgia on Monday, the mood was still sombre here for Tuesday's women's runs at the Whistler Sliding Centre, where the Georgian died in a training run accident last week.After 20-year-old Felix Loch dominated the field to claim the men's singles title on Sunday, Huefner claimed victory in the women's with a flawless fourth run and only the doubles title remains to be decided.Having held an overnight lead of 0.05sec over the field, Huefner turned the screw on Tuesday's third run with an almost perfect slide to open a 0.268sec gap.The margin between the German and Reithmayer in second looked decisive and so it proved as the German clocked a top speed of 134.1kph on the last run to take gold.Germany's women have dominated the luge in recent Winter Games.Reithmayer has the distinction of being the only non-German to claim an Olympic medal in the women's singles luge this century after Germans took gold, silver and bronze at both Salt Lake City in 2002 and Turin four years ago.Since the country reunified in 1990, Germany has won the men's, women's and doubles titles at Nagano in 1998 and at Calgary in 1988.In the doubles, Austria's Linger brothers, Andreas and Wolfgang, are the defending Olympic champions from Turin and will be challenged by Germany's Andre Florschuetz and Torsten Wustlich, who won silver in Turin. 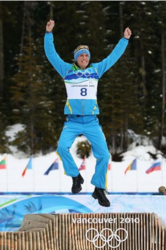 Starting with bib eight, the 31-year-old Ferry claimed his first Olympic medal after hitting the front on the last lap following his fourth shooting session to overhaul pace-setter Jay.He crossed the line in 33min 38.4sec, with a winning margin of 16.5sec."Everything came together today," said Ferry's German coach Wolfgang Pichler.Jay's medal followed his gold success Saturday in the 10km sprint, which meant he started Tuesday's race first.He ended 28.2sec adrift of Ferry, who dethroned French 2006 champion Vincent Defrasne in style, the latter coming in 22nd more than two minutes off the pace.Ferry's previous main successes comprised a world title in the mixed relay and two World Cup pursuit races.This win will allow him to steal back a share of the limelight enjoyed by wife Heidi Andersson, who is a multiple armwrestling world title winner.Sweden's only other men's biathlon gold came 50 years ago, when Klas Lestander won the 20km.Sumann said silver was a huge result for him."I felt really at ease. and I must say the equipment was just perfect, it was absolutely great. What else can I say? silver, wow, amazing."While Sweden enjoyed the sweet smell of success fans of neighbouring Norway were glum after top names Emil Hegle Svendsen and five-time Olympic champion Ole Einar Bjoerndalen failed to shine.Svendsen, triple world champion two years ago and a silver medalist in the sprint, lost his way after a bright start as he had to turn in three penalty loops for missing shooting targets.Bjoerndalen also had another off day and could only manage seventh, 50sec behind Ferry."I had a good skiing performance but missed two (targets) in the last shooting when I felt very tired," said the sport's most decorated athlete with 14 world titles and 91 World Cup race wins.