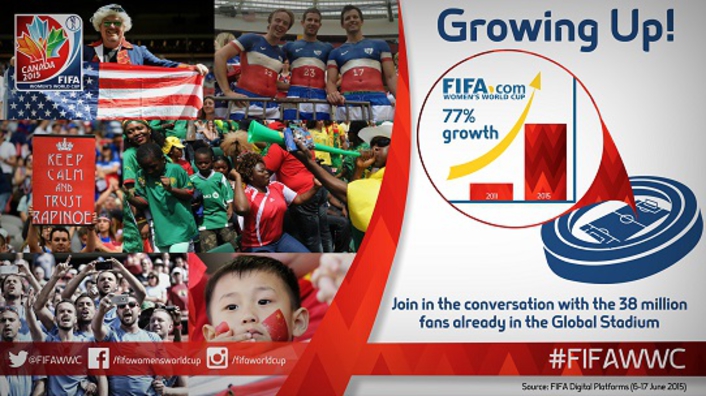 Below is a summary of the key highlights.

Attendance Stats
Total attendance: 885,369
Average attendance: 24,594
Biggest attendance: 6 June doubleheader featuring New Zealand vs. Netherlands and Canada vs. China in Edmonton - Canadian record set for any national team playing at home with 53,058 spectators.
Five of six venues had sellouts in the group stage with Montreal close to 90% capacity for Canada vs. Netherlands on 15 June played before an enthusiastic 45,420 fans.
Tickets are currently unavailable for the Final on 5 July.
Canada vs. Switzerland in the Round of 16 on 21 June has less than 3,000 tickets remaining.
Quarter-final match in Ottawa on 26 June is currently unavailable.

About 2.3 million viewers tuned in to CTV, TSN and RDS to watch Canada’s match against New Zealand, a record for any FIFA Women’s World Cup™ audience in Canada.

USA against Sweden was watched by 4.5 million viewers on Fox, an American viewing record for any FIFA Women’s World Cup™ group stage match and the most popular football match ever broadcast on the channel.

Japanese audiences are also growing, with 6.1 million fans enjoying FUJI TV’s coverage of their nation’s game against Cameroon, beating all viewing figures from the 2007 edition of the competition and higher than all figures for 2011 except the final.

Germany’s matches have been topping daily German viewing figures and more Chinese viewers are tuning in to watch the competition compared to 2011.

Fan Zones
The Fan Zone areas have also been a great success for FIFA, the National Organising Committee, and our FIFA Partners and National Supporters. Each location hosts a range of engaging experiences that let fans express their passion for football. So far in the tournament the Fan Zones across the six venues have been well attended with the Vancouver site proving the most popular destination with over 44,000 fans attending the first six opening dates.

Goal-line Technology
Goal-line technology has been put to effective use in several games so far at the FIFA Women’s World Cup Canada 2015™. It proved decisive in the awarding of a goal by Mexico in their 1-1 draw with Colombia on 9 June in Moncton, a goal by Thailand in their 3-2 victory over Côte d’Ivoire in Ottawa on 11 June as well as a goal by Costa Rica in their 2-2 draw with Korea Republic in Montreal on 13 June. Spectators in the stadium and in front of their TV were also able to witness the benefits of the technology as replays of critical incidents were shown in order to have visual confirmation of the “goal” or “no goal” situation. A crucial header on the goal-line by Meghan Klingenberg was one of those examples as the USA-Sweden match ended 0-0 in Winnipeg on 12 June.