The experienced MCR team is presently running through all procedures and processes
The sense of anticipation for the 2014 FIFA World Cup Brazil™ stepped up a gear at the International Broadcast Centre (IBC) as the screens of the Master Control Room (MCR) began to light up.

‘Feel It, It Is Here!’, the slogan of broadcast colleagues South African Broadcasting Corporation (SABC) during their coverage of the 2010 FIFA World Cup South Africa™, was brought to mind as the MCR went from the blank screens of the installation phase to action images of various match feeds from the FIFA Confederations Cup Brazil 2013. The sight of the MCR becoming fully operational is a strong visual reminder to all users of the IBC of the imminent arrival of the event.

The Opening Match of the 2014 FIFA World Cup BrazilTM, between host nation Brazil and Croatia, is just 21 days away…

Since last Monday until the end of the event, around 2,000 media professionals could enjoy the varied array of snacks, pastry, cold and hot beverages; A Dessert Center is also operating at the venue.

Starting last Monday, May 12th, McDonald's - official sponsor of the 2014 FIFA World Cup™ - is operating a McCafé at the IBC (International Broadcast Centre), located at the Rio Centro Convention Center in the city of Rio de Janeiro.

In a 350m² place, the chain will offer 24 hours round the clock, not only the McCafé's traditional menu (from June on, only), but exclusive innovations such as wraps, quiche with salad and red-fruit yoghurt. Moreover, there is a Dessert Center in the place, and it will offer the traditional deserts of the chain, in addition to the 'dulce de leche' cone.

"We have prepared a special structure to deliver a unique experience to the visitors. The whole Project aims to deliver still more comfort to the public, starting with the visual communication, the furniture, free Wi-Fi that enables access to Internet, and of course, a menu that will surprise everyone with its variety", says Roberto Gnypek, Marketing Vice-President from McDonald's, Brazil. 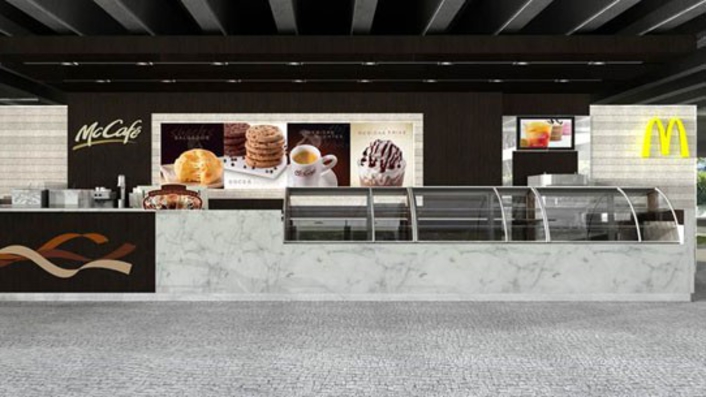 McCafé at the IBC at the Rio Centro Convention Center

The chain will perform several activities targeting the interaction with the professionals present at the IBC, such as raffles with exclusive gifts and sampling of typical Brazilian products, such as 'paõ de queijo' (cheese bread).

"These professionals come to the country for a very important moment and they will use the IBC as their official headquarters for almost two months, therefore, we will offer them some activities to make their stay as pleasant as possible", states Hélio Muniz, McDonald's Corporate Communication Director.

Going Into Production
Sony Announces Companies ...g the 2014 FIFA World Cup
The IBC at Riocentro Opened its Doors to MRLs