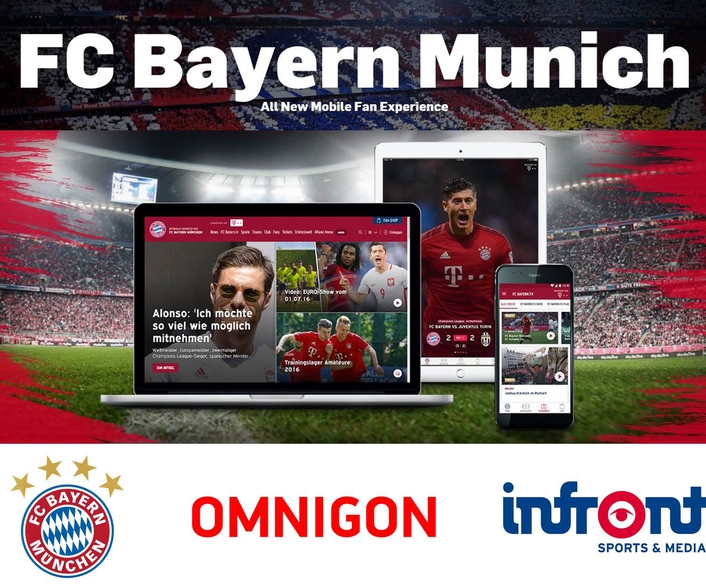 Ahead of the start of the Bundesliga season, they are now available for iOS and Android devices

FC Bayern München, the most successful club in German football history, has selected Omnigon, one of the world’s leading digital services firms in sports and a subsidiary of Infront Sports & Media, to design and develop its suite of all-new iOS and Android smartphone and tablet apps. The apps, released in both English and German, launched in advance of the upcoming 2016/17 season.

Features of the apps include a Match Center with full match statistics, scores, fixtures and tables (from the Bundesliga, the UEFA Champions League and the DFB Cup), news and photo galleries. There is also a Squad page with detailed statistics and full profiles of all Bayern players.

Features soon to be added to the app will include personalisation that will allow fans to follow their favorite players, polls, sweepstakes, and the ability to deliver content based on “fan context” - whether they are on the go, watching on TV, or attending the live match. Fans will also be able to tap into Bayern’s TV hub to access club highlights and post-match interviews. Additionally, there will be a ‘Webradio’, which allows the millions of passionate Bayern fans worldwide to listen to all matches.

“We are very happy with our app partner Omnigon”, said Stefan Mennerich, FC Bayern München’s Director Media, Digital and Communications. “We chose to work with them because they are the absolute benchmark for app-providers in the sports industry, and they have maintained that standard throughout the whole project with us. Both the Android as well as the iOS app have been well-received among our fans, and we are proud to have taken the next step of our digitalisation process together.”

“Omnigon is thrilled to have been chosen by Bayern München to launch their suite of new mobile and tablet apps”, said David Nugent, Chief Commercial Officer, Omnigon. “We’ve worked very closely with the Bayern digital team and formed a real partnership. Bayern has one of the largest fan bases in the world so we understood how important it was to create an experience that would resonate all over the globe. We’re excited the passion our team brought to this product will be in the hands of FC Bayern fans worldwide.”

Bora Nikolic, Omnigon’s Chief Creative Officer, said: “The reimagined smartphone and tablet apps focused on three key design principles. The apps needed to be elegant and simple to use. They needed to let the passion and emotion of the on-pitch action and of the supporters come through, all while surfacing relevant and useful content to them. Above all else, however, is they were designed to foster a connection and build a relationship between the club and its fans, regardless of their location.”

Bayern München has won 26 national titles and 18 national cups (DFB Cup), most recently during the 2015/16 season. Bayern kicks off their title defence on Friday, 26 August against SV Werder Bremen.

About FC Bayern München
FC Bayern München is one of the world’s most successful sports organisations on and off the pitch. Since the club’s foundation in 1900, FC Bayern has won 26 national championships, 18 domestic cups as well as five UEFA Champions League titles, making it the most successful German team in history. This summer, the club had 12 players participating in the UEFA EURO and Copa America. FC Bayern is also renowned globally for its financial success, youth development and supporter culture. FC Bayern has a unique history of profitability, a track record of developing world class talent which can be seen by the tournament-high 14 players participating in the 2014 FIFA World Cup, as well as a unique ownership structure of being owned by more than 270,000 club members, the most of any sports organisation in the world. Since 2005, FC Bayern has been playing every home game in front of the sold-out, 75,000-seater Allianz Arena. With stars like Arjen Robben, Franck Ribery, Xabi Alonso and Robert Lewandowski as well as World Champions like Philipp Lahm, Thomas Mueller, Jerome Boateng and Manuel Neuer, FC Bayern boasts a world class squad that remains one of seven in history to win a “Treble“ (Domestic League, Cup and UEFA Champions League). With over 400 million followers worldwide, FC Bayern is one of the strongest brands in global sports. In April 2014, FC Bayern opened a U.S. office in New York City to engage with the millions of fans living in the United States. In September 2016, the club will open an office in Shanghai.

About Omnigon
Omnigon is a team of digital strategists, artists and technologists working exclusively in digital content delivery in the sports, media and entertainment industries. Since its founding in 2008, Omnigon has established itself as a market leader, focused on helping clients achieve returns on the strategic, creative and technical investments they’ve made. Omnigon, headquartered in New York and with offices in Los Angeles, London, Toronto, Kiev and St. Petersburg, works with celebrated, global brands including PGA TOUR, AS Roma, the DFB Cup, IRONMAN, NASCAR, World Rugby, the United States Golf Association (USGA), FOX Sports, Miami Heat and countless others.