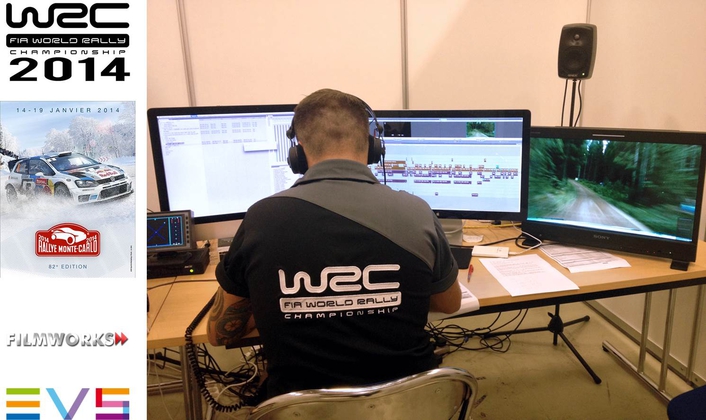 .
This January the World Rally Championship (WRC) kicked off in Monte Carlo with all content handled by EVS solutions. FilmWorks, the Finnish technical solutions and production services provider responsible for the entire coverage and distribution of WRC content, has selected EVS solutions to power its workflow for the second consecutive year. During the Championship, FilmWorks will deliver a range of coverage, including two highlights shows. The Championship sees 13 rallies take place all over the world, with the next taking place in Sweden this week.

A key requirement for FilmWorks was getting content out as fast as possible to various stakeholders – car manufacturers, rights holders and the event promoter – and to produce the daily 26-minute highlight show. On top of that, they produce the 52-minute roundup show – featuring the best highlights of the week – and video clips for the WRC website. It was absolutely vital to have a system that could meet the challenge quickly and efficiently, keeping up with the intensity they required. They also benefitted from the workflow’s zero-failure reliability, having proven itself during the 2013 WRC, as well as its integration with post-production through EVS’ IPLink and FCP Exporter.

In a similar setup to 2013, content recorded on ENG cameras and from on-board cameras in the rally cars is ingested with ENGSoft. It’s then logged and made instantly available to Final Cut Pro craft editors using the IPDirector PAM suite. Laptops equipped with IPBrowse allow the different stakeholders to swiftly search, view and export media for content contribution or analysis. Whereas Xsquare enables the production team to control media transcoding and transfers, so that the content selected by the stakeholders is delivered in the required format. Finally, an XS media server is used for playout and SDI contribution.

“The EVS-powered system allows us to ingest and log a significant amount of media files in a very short time span. This means editors can easily identify, view and retrieve relevant content and begin compiling clips for highlights packages immediately – as content’s being ingested,” explained Jari Vuorenmaa, technical operations manager at FilmWorks. “We can then distribute finished edits to our multiple stakeholders. Fast turnaround production and quick time-to-air both get big ticks.”

“EVS proved during the 2013 season that they were up to the job and so it was a no-brainer to use them for the 2014 season as well,” commented Marko Viitanen, CEO of FilmWorks. “Speed is certainly critical for us, but so is reliability as there’s no room for error here, and EVS gives us both those assurances. The system also seamlessly integrates with post-production, meaning FCP craft editors can view and import media managed by IPDirector and then export those edits to the XS server for playout, which is another big plus for us.” 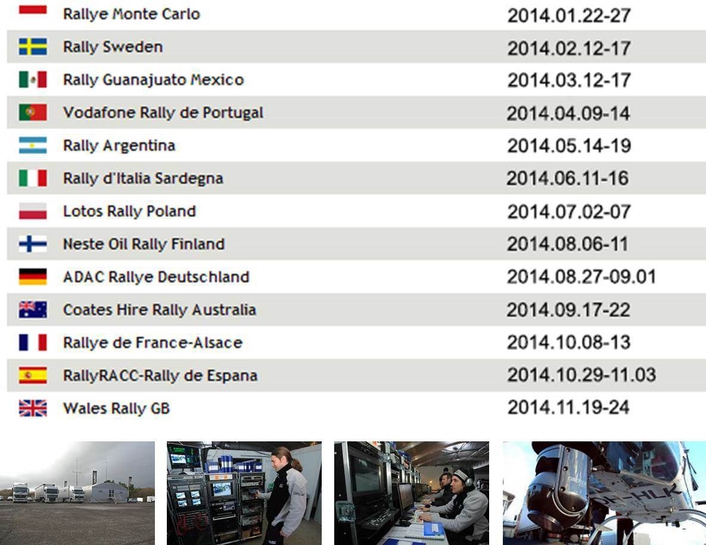 WRC Promoter GmbH is responsible for all commercial aspects of the FIA World Rally Championship until 2018. This includes the marketing of media rights and production of TV signals. FilmWorks has been chosen to produce and distribute content, including highlights, for the 2014 season, and has in turn commissioned EVS equipment for the job.

IPBrowse
Used by stakeholders on laptops to search and review content, as well as to export the selected content.

Xsquare
Used to handle media transfers and transcoding, so that files can be delivered to rights holders and car manufacturers in the requested format. Also used to export media files for the WRC’s website.

IPLink & FCP Exporter
Allows Final Cut Pro craft editors to view and import media that’s managed by IPDirector on the nearline storage and then export their edits to the XS server for playout.