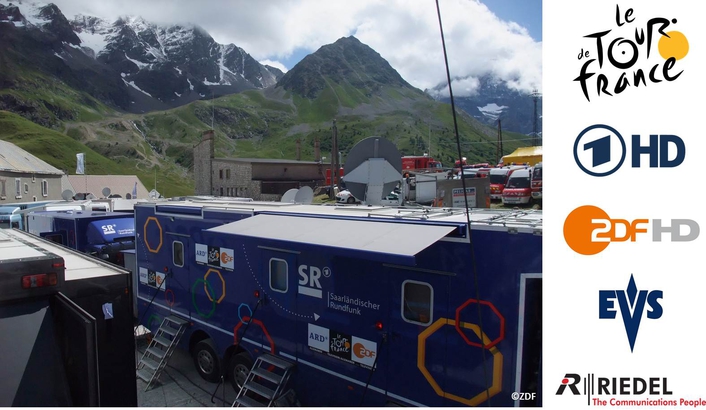 With locations switching almost daily, the Tour de France is probably one of the most demanding televised sporting events
At this year’s Tour de France the German publicbroadcasting network ZDF used a fiber based MediorNet system from RiedelCommunications to connect its DSNG and the main OB truck.

A Riedel Artist digital matrix intercom system enabled communications between the various OB vehicles that were used for broadcast. In addition, a number of racing teams, such as Team RadioShack, used the Riedel brand NanoTalk for the communication between riders, technicians and the team captains during the races.

With locations switching almost daily, the Tour de France is probably one of the most demanding televised sporting events because new locations also means setting up the technical infrastructure time and time again. A total of eight vehicles from the national public broadcasting networks ZDF and ARD were working together for the three weeks of "Le Tour."

ZDF, as the responsible network, furnished a versatile MediorNet solution that enabled the integration of an EVS operator in the SNG with the EVS SDTI network in the OB truck. This link connected the broadcast feed between the main OB truck and the ZDF DSNG. 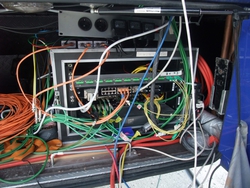 “Riedel MediorNet simplifies our work at the Tour significantly," said Matthias Kampen, technical director at ZDF. "The amount of effort needed to set up the cabling infrastructure is drastically reduced. Previously there needed to be an extra system for the EVS integration; now all signals run on just one link. In addition, MediorNet handles the distribution of the ZDF Ethernet network, which also made the whole setup a lot faster and easier.”

A Riedel Artist digital matrix intercom provided the communications infrastructure interconnecting nearly all trucks and SNGs in ZDF/ARD's OB truck fleet at the Tour. With one Artist 128 and two Artist 32s, a total of 3 Artist mainframes were installed together with 32 Riedel Artist control panels.

Besides the MediorNet and Artist digital matrix intercom installation, about 50 NanoTalk radios were used by various teams at the event. NanoTalk is an ultra compact radio that is especially tailored towards sports and lifestyle applications, such as cycling or winter sports. The radios are only 43 grams (1.5 oz.) in weight, about the size of a small matchbox, and can be easily mounted to rear of the riders' helmets. Professional riders from nine different teams, including Thor Hushovd, Andreas Klöden or Tyler Farrar, used NanoTalk at the Tour de France.